A little present from Mark Stoddard 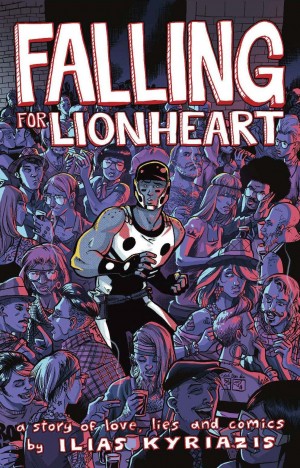 While it is now no more than an over-used stereotype – if it was ever more than that – comic-book readers in their teens and beyond have always been seen as fantasists; the geeks that dream of super-powers to hide their own deficiencies and desperate to get the (usually unobtainable) girl. (OK, perhaps not that much of an unfair label – I know I’ve certainly been there before!) Falling For Lionheart (FFLH), the upcoming short graphic novel by Ilias Kyriazis and IDW, is a love story which merges and mutates these preconceptions with a rather unique take on the super-hero genre.

The best fiction is often about the extension and dramatisation of the most simple human emotions and situations, and yet super-hero comics often fall into the trap of focussing on the shock, surprise, and plot-twists of life as a hero without thinking about the basic human elements. Not so here. Leo ‘Lionheart’ Hartfield is a member of ‘the Squad’, a team of super-heroes adored by the public and enjoying celebrity status. Leo’s unrequited love is fellow Squad-member Angela (Ubergirl), and the sensitive and shy Leo takes to writing autobiographical mini-comics to deal with his sense of loneliness. His comics bring him to the attention of Cassandra, who shares his passion for the medium, but doesn’t suspect his true identity. When one of Lionheart’s missions goes drastically wrong, Leo is forced to come to terms with his feelings for Angela and Cassandra, and the power of sequential art begins to impact on his life in a way he never dreamed possible.

If that all seems a little too complicated or overbearing, please don’t let it put you off. Firstly, this is a very stylish book. The dialogue is real and perfectly balanced amongst the detailed and distinctive artwork in a way only writer/artists can usually achieve. Kyriazis has a natural artistic flair which admirably handles the multiple elements of the story while grounding it in something that is always tangible. The entire cast, while each often representing a genre stereotype, is nicely developed beyond the love triangle of Leo, Angela and Cassandra, giving life to the world which Kyriazis has crafted. The interplay between the ‘real life’ scenes and the comic strip ruminations of Leo are delightful, and sure to bring a smile to comic fans everywhere, while also adding to the emotional drama of the story. 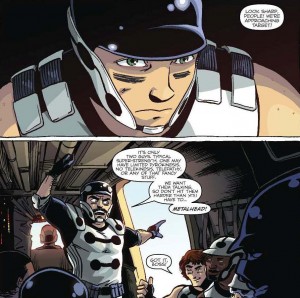 This could all too easily have devolved into a high-concept piece that is too clever for its own good, trying to play with genres and tropes for knowing smirks and kudos from its audience, whilst almost being self-referential in the use of the comic-within-a-comic approach; but despite the array of smart and humorous moments, FFLH never gets close to becoming lost in its own reflection, remaining true to its heart and soul as a love story with a twist.

Perhaps to its detriment, the concept and genre mash-up is about the only twist the book has to offer; the ending could not be more obvious, and there are no major plot surprises to speak of. Yet the character journey is so beautifully created and crafted within so few pages that this hardly seems to matter, and the simple structure is actually a nice change of pace from the dark, convoluted storylines that pervade most of the current comics mainstream. The unity of the narrative is also a high point – this is not a sporadic, genre-hopping tale in the mould of Scott Pilgrim; it is one fluid adventure that always feels grounded in the reality of human relationships despite the fantastic, super-hero elements and backdrop. And it’s funny, just about enough to keep you smiling the whole way through without playing anything purely for laughs.

FFLH is an absolute joy of a comic book: a heartfelt, humorous and thoroughly feel-good tale with truly outstanding visuals, impressively bringing to life this action-packed comedy romance with skill and grace. I think I’ll just go read it again.