I’ve wanted to review trade paperbacks for a while, but I struggled with the proper format. You see, I don’t think you choose to purchase a collected comic book in the same way as you do an individual comic book. The purchasing decision is almost completely different. Additionaly, non superhero trades have a much longer shelf life, as you are not trying to keep up with the rest of the comic universe.

Additionally, I don’t remember ever reading a trade paperback that flat-out sucked. Oh sure, I’ve read many “nothing special”s, and quite a few “Just not for me”s. Sometimes I’ve encountered a couple of “Wow, was THAT over-hyped”s as well as the rather rare “Boy did THAT not age well!”s. But things that truly SUCK don’t get turned into trade paperbacks.

Once in a great while you will get something that is truly mediocre, but often that is filler for completists who need to have every issue of their favorite series bound. But even these are miles away from suckitude. (Then again, I haven’t read Countdown to Final Crisis)

So when reviewing a trade paperback, I think the questions are:

The Nightly News by Jonathan Hickman 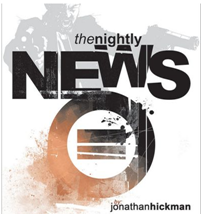 Jonathan Hickman has become something of a household name in comic book circles during the past year or so. You know how it goes: a writer takes the lead on a big, headline stealing project, and goes from a favorite of a few fanboys to getting interviewed in USA Today. I guess writing the Fantastic Four and killing The Human Torch (even if the death barely even lasted a year) qualifies for getting to that next level.

Now of course, almost all “overnight successes” have hidden gems created prior to their so-called superstardom. And that’s where The Nightly News comes in. Hickman wrote it in 2006, this helped him get attention from Marvel comics.

This was a round-about purchase for me. I had recently read the first volume of Jonathan Hickman’s Fantastic Four, after hearing much of the hype. I found the work to be rather interesting, and checked out the other works by the author. I saw that he was the one who wrote “The Nightly News” which I remembered reading about.

So, when Thwipster offered The Nightly News for $9.99, I decided to give it a go.

So, maybe you (or someone on your Christmas gift list) are enjoying Hickman’s Fantastic Four (or other Marvel Comics) run, and want to give some of his other works a try, then this is the review for you.

Who would like this book? Let’s start with the basics: This is not standard comic book fare, so if you only like superheroes (or action/adventure), then this may not be for you. And I’m not even sure I would recommend it to fans who like Hickman’s Fantastic Four work, as it has little in common with the sci-fi adventuring of Reed Richards and company.

For me, this is a cynical tale of revolution that reminds me quite favorably to both Alan Moore’s V for Vendetta and Warren Ellis’s Transmetropolitan, with a bit of the style of Fight Club and Network dashed in for a bit of flavor. And some cynicism is definitely required for this one.

I would also say that this book, despite describing politics and political actions, takes a very apolitical stance. This book would appeal to liberals, moderates, and conservatives alike.

Probably some basic knowledge and enjoyment of the news is helpful. If you are bored by The Daily Show, then perhaps this wouldn’t appeal.

This is an independent comic book, pure and simple. The art is very modern and experimental. Get your high-powered reading glasses for all of the references in the corners and clues hidden in the dark.

This is a book that is meant to make you think, and not in that Avatar/Matrix sort of way. More like, this book will challenge the very fabric that I typically use to craft my thoughts, ideas, and opinions. It challenges you for a revolution, but shows the folly of such action.

This book makes you think in a new way. It gives your mind a good workout. And it avoids leading you to a specific place or a specific message. That’s good, if Hickman had introduced any preachiness, it would come out rather wrong.

I will quote someone who is more talented than me:

That being said, describing The Nightly News is really difficult. I have never read anything quite like it. But let me try to come up with some sort of description, instead of writing vague platitudes.

There are two main threads in The Nightly News (each thread has lots of little tendrils). The primary thread consists of a main protagonist, John Guyton, a former newspaper reporter who has now become something of a domestic terrorist for a group called The Brotherhood of the Voice. John’s journey begins when he is first confronted by Alexander Jones.

The domestic terrorist is first committed by Alex against a newspaper reporter on live television. This is later continued by John and a small band of Fight Club like individuals (think Project Mayhem against newspaper companies rather than banks and financial institutions)1. This thread is interesting enough, but like the actions of Codename V in Alan Moore’s V for Vendetta2, the actions are really not the most compelling part of the story.

The second thread has to do with the media’s reaction to this domestic terrorism. All of the major news organizations in the United States are run by corporations. It’s not really of any news to anyone, that sometimes the political views, but in this case more the interests, of the corporations conflict with the ideals of reporting pure news. This book tackles the political implications of what corporation run news means.

In this book, the political implications doesn’t involve the opinionating of news, but rather the moral concessions that the organizations have to make to keep governmental forces on their side and in their corner. It is truly a fascinating and quite realistic look at those basic implications.

The art is rather fascinating. Hickman did all of the artwork himself, as he is a trained graphic artist. The graphic artist sensibility really shows through in this work, as items are laid out on a two-page spread, not as one would read a comic, but as a consumer digests and navigates digital information (typically used with advertising or user interface design). 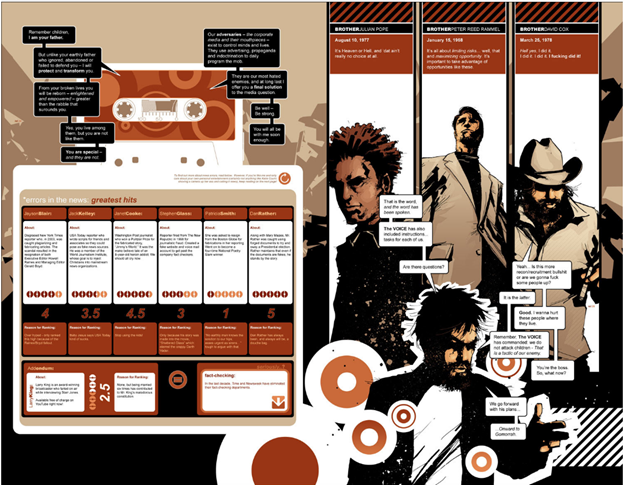 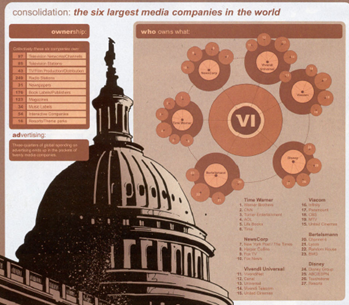 Additionally, lots of details are provided throughout the book. They seem like truths from our world, the reader’s world.3 This provides an excellent sense of realism. That perhaps the reactions of the people involved in this book are not so far removed from reality. Yes, the circumstances are extraordinary, and certainly the conversations are condensed for story purposes. But, it seems really really close.

This is really a complete, and very mature, work. And surprisingly, this was Hickman’s first foray into comic book creation. It is a fascinating study that avoids the very nice, philosophical, “What is truth” argument. But instead goes into the process: What does it take for a multi-national corporation with very diverse interests, including a news organization, to acquire information and then pass it down a very worn and eroded channel to the public. And then, what would happen if somehow that channel is compromised from outside forces.

I avoid telling more about this story, because it is one of those works that needs to be read multiple times. But reading it additional times may tarnish how I write about it, in the current moment.4 So, I am leaving it vague.

The trade paperback collects the six issues of The Nightly News limited series from Image Comics, originally released in 2006.

The original trade paperback of The Nightly News is on its third printing5, so I would hazard a guess that your local comic book shop either has it or can order it.

Additionally the “Anniversary Hardcover” is being released this Wednesday (to comic book shops), containing over 100 additional pages (as Image Comics puts it in their press release):

the never before seen original script, an in-depth look at his process, a complete making of and much more!

I was unable to find a digital copy of the title, so you’re stuck with glossy paper for the time being.

For me, I am very happy to have the trade paperback edition of the story. It IS very good, but for me it’s not deeply personal. Basically, the regular edition Blue-Ray disc is fine, I don’t need the Director’s Cut.

Every once in a while, I get a bargain and I say to myself that I didn’t pay enough for what I got. This is definitely one of those times.

It’s a great combination of prose and art that tell a very compelling story that has some real depth to it. The story does not take any short cuts or go down any well-travelled paths. Instead it tells a very innovative story that pulls in elements from many works.

Additionally, this is a story that can only be told in comic book form. Yes, the basic plot could make a very lovely film, but that medium would be totally unable to capture the true elements of the information being conveyed by the singular artist.

The only real complaint about the book is that there are not many overly likeable characters in the book. Yes, of course you get behind the main character but the fact that he is a terrorist and mass murderer does hamper that a bit.

So, if you like a touch of realism in your graphic novels, then I heartily recommend this one. A tremendous addition to the bookshelf.

1 – Do not comment saying “The first rule of Project Mayhem is you do not talk about Project Mayhem.” Please… I write these for free, and I ask very little. It’s not even funny as a hipster, writing an ironic response, cause he asked me not to kindof way.

2 – Just cause I don’t want you to strain yourself pulling out the Absolute Edition of V For Vendetta: he destroys the houses of Parliament, kills several members of the fascist party, he then blows up the security communications center of England.

3 – I say “seems” only because I’m too lazy to go and look up these statistics myself. They have the stink of truth about them. Let’s just say they are true enough to use them in drunken arguments after (no fewer than) three shots of good whiskey.

4 – Or I’m just plain lazy (or maybe acting crazy, or just too proud as well)

5 – I’d tell you which edition I have, but the font is light tan on a dark tan background… Seriously, in 2011 we don’t know which text combinations are practically illegible.