It wasn’t too long ago that metal was a “man’s world.” But nowadays, listeners hardly bat an eye to female-fronted metal/hard-rock bands.

Joining me this week is the first lady of Inside Pulse: the one, the only, Gloomchen, the writer who, once a week, offers up a totally true tune for your (yes your) enjoyment.

In this week’s column, Gloomchen and myself will offer up our own favorite female vocalists of the metal genre. But, keeping with the theme of the column (Opposing Elements), we can’t agree on everything. So, while we each offered up three picks unopposed, we’ll have to argue about the last four slots on the list.

So, without further ado… 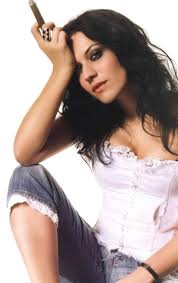 Regardless of whether it’s in English or Italian, Scabbia’s understated counterpart to male vocalist Andrea Ferro creates a goth-ish vibe throughout their strong modern metal outings. Often compared in America to Evanescence’s Amy Lee, Scabbia’s credit is that she contributes much more mood with her voice rather than bombast. Her range and ability may not be stars and moons above the competition, but one only realizes this upon extended thought and comparison to others — within Lacuna Coil, everything fits perfectly. She is a master of atmosphere.

Man, there was almost a mini-uprising in metal circles when Swedish metal-masters Arch Enemy, fresh without a lead singer, hooked up with vocalist Angela Gossow for 2002’s “Wages of Sin.” But Gossow did not disappoint and on the band’s follow-up in 2003, the highly successful and impressive “Anthems of Rebellion,” Gossow proved she is one of the metal-scene’s sharpest and biting vocalist. As she growls through songs like “We Will Rise” it’s clear the band made a good decision. Male or female? Doesn’t matter, she’s one hell of a vocalist. 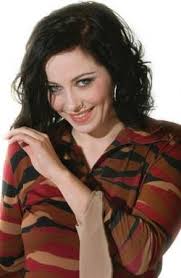 While the band has moved decidedly from traditional metal in nearly all aspects, van Giersbergen turned the Dutch band The Gathering from a nondescript death metal band into something innovative and spectacular. “Mandylion” and “Nighttime Birds” took metal onto a few side roads, but with van Giersbergen’s strong vocals, the changes were more than welcome. Beautiful and well-trained but never over-the-top operatic, Ms. Anneke pours more emotion into half a syllable than some folks sputter over an entire album. I like her so much, I named my cat after her. 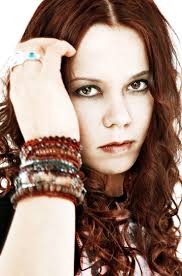 Finland’s Lullacry swapped out lead singers with the same name (Tanja for Tanya) without much fanfare, but it definitely paid off. Tanya offers up the perfect melodic, feminine vocals to counteract the rest of the groups abrasive, pop-oriented metal. Far less metal than, say, Angela Gossow (Arch Enemy) or Morgan Lander (Kittie), Tanya never drops into guttural growls, yet still maintains enough energy and charisma via her vocal styling to front a metal band.

Norway may not be the first home to ladies in rock, but the wintry home of black metal has given rise to many a fine female overture. Death/black band Sins of Thy Beloved may be primarily male growls, but it’s their violins and the angelic voice of Auglend that got them noticed. Dreamlike in manner, Auglend added a ray of light to the desperately gloomy band’s creations. She avoided sounding hokey or overblown even when the rest of the band teetered on the edge of cliche at times. It’s a sad, beautiful mix, and yet another female vocalist with the ability to change an entire song with minimal input.

Fronting a hardcore-bordering-on-metal band like Walls of Jericho would be a big task for any singer. But Candace Kucsulain is unlike other metal frontwomen who can either switch the metal on or off, fluctuating between the hardcore and death metal growl or the more feminine singing. Kucsulain can tear through track after track in full hardcore mode while still maintaining the slight femininity in her voice which is a great touch. The growls and grunts throughout the band’s latest release, “All Hail the Dead,” always have the slightest, subtle hint of femininity that really makes the band’s overall sound stand out from the pack. The musicianship is good, but it’s the vocals that really make Walls of Jericho. 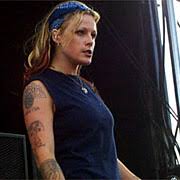 Pro: Tom
Is there anyone more angry than Otep? Seriously. I remember hearing the first death metal groans emanating from the Ozzfest second-stage in 2001 as Otep took the stage. She could easily front a band like Cannibal Corpse without missing a beat and packs enough venom to command attention on stage despite her small frame.

Con: Gloomchen
I spent a lot of time listening to Otep in the attempt to understand why people find this woman so fabulous. Maybe it’s just her neverending man-bashing lyrics that irritated me, but as a whole, her singing simply cannot be played for background enjoyment whatsoever. She has decent growling ability, but still comes off as whiny and occasionally downright comical.

Pro: Gloomchen
While it’s been said she’s not all-that live and things were much better before half of the band fell apart, Lander not only has the growling down pat, but her straight vocals hit hard, too. She’s still young and honing her craft, but still pours a straight glass of evil into everything she records. Few females out there can do what she does, period.

Con: Tom
I’m not necessarily against the inclusion of Morgan Lander on this list, but she just really seems to lack direction. You’re right, she growls great, her straight vocals are on the mark, but it just seems like she’s not sure what direction she wants her band or her singing to go in. On the first Kittie album she was raw, on the next she was nothing but death metal and on the latest she seems to be moving towards a mix of the two. Morgan Lander doesn’t lack talent, only a focus.

Pro: Gloomchen
The second female vocalist of TPH, Enckell replaced the well-liked Mia Stahl and added a killer boost that better fit the atmosphere of the band. Her tremendously powerful voice is almost too downplayed as she sings alongside JÃƒÆ’Ã‚Â¶rgen SandstrÃƒÆ’Ã‚Â¶m (growler for Grave) and lends an eerie alto presence. She’s definitely one to keep an eye on.

Con: Tom
You’re right, her voice is almost too downplayed, and I really think it’s because the band knows she’d be unable to carry the group vocally alone (or even more 50/50 like the route Lacuna Coil chose). It’s a pretty voice, but nothing noteworthy enough to create a major stir.

Pro: Gloomchen
Apparently, there are some girls in America who can sing as well. Over five million fans seem to have noticed this, too. Strictly speaking, she’s an extremely gifted vocalist with a range of over two octaves and seems to have found the area of music where she feels best fit. One may note that she could have just as easily gone the Celine Dion route, to be honest, and isn’t what one might classify as “metal” at all, but better “Bring Me Back To Life” than “My Heart Will Go On,” no?

Con: Tom
Amy Lee is a hell of a vocalist, and I love Evanescence but, much like Morgan Lander before, Lee seems to lack a clear direction. Evanescence’s first (indie) release was fantastic. It should have laid the foundation for something huge on the major-label debut, but the band seemed to fall a little short. As Lee has shown with her work with Seether (re-singing part of the band’s hit “Broken” for the “Punisher” soundtrack), her voice can really fit well with a hard-rock band. I Just think her band could do a little better to back her up.

So there you have it. Tom and Gloomchen’s take of the top female vocalists in metal. Got a comment for either of us? You can e-mail Gloomchen at gloomchen@insidepulse.com, and myself at destroyer__78@hotmail.com. And check out both of our profile pages while you’re at it…

But wait, Gloomchen’s not quite done: Being a female who enjoys the microphone a little too much (although only when drinking to kill the stage fright) and a chicky who has been listening to metal for far too long, I have nothing but the utmost of respect for these women AND to the bands who have found that girls metal = awesomeness. It doesn’t have to be an all-girl schtick band and it doesn’t have to be all overblown operatic tripe; females can do the same kind of rocking as the males. Or, of course, you could just have a Gloomchen guest spot on your album, it’s all good.

Until next time, this is Tom D’Errico and Gloomchen, angry as ever.