This is Leave Your Spandex @t the Door, packed neatly every week for your enjoyment, freshly arrived from Birmingham and preparing a huge expose (no, really!)

This is number 105 and it has a bit for everyone:

â€¢ Are you Mr Guy Debord? For daily updates and even more reviews, videos and commentary, keep checking the LYS@D daily blog. and subscribe to the RSS feed.

This week is even quieter, with few standout panels. Where has the funny gone?

It’s been over 2 weeks since the last juicy column ,so here’s what I’ve been reviewing lately:

Another great comics bites the dust.

It will of course be missed, although this isn’t such shocking news to me, as I explained here

Two things to take from Steve Seagle‘s ‘eulogy‘ of the title.

1. This reply, epitomizing the heart of the title very succinctly (something i had difficulty doing in my own review)

2. This sneaky critical quote at the top of the page:

â€œAmerican Virgin is one of the most enjoyable monthly reads from Vertigo. Adam is a very intense and controversial character, and the writer doesn’t waste any chances to really push his beliefs and convictions to the breaking limit.â€ â€“ Insidepulse.com

from yours trully, and my earlier review of #18. 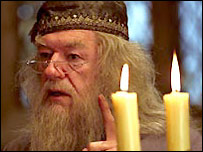 In unexpected news this week, J.K. Rowling outed Harry Potter’s Professor Albus Dumbledore, fictional Headmaster of the Hogwarts School of Wizardry, a mere two books and 4 years since his death.

And everyone applauded, for a gay man who was never outed, not in his fictional lifespan, not in the books published or the movies released. Way to go to give us a great role model, ms Rowling!

As for the media circus?

Gay rights campaigner Peter Tatchell welcomed the news about Dumbledore and said: “It’s good that children’s literature includes the reality of gay people, since we exist in every society.

And a spokesman for gay rights group Stonewall added: “It’s great that JK has said this. It shows that there’s no limit to what gay and lesbian people can do, even being a wizard headmaster.”

“Dumbledore is gay,” she said, adding he was smitten with rival Gellert Grindelwald, who he beat in a battle between good and bad wizards long ago.

This could actually fit, looking back. But I still couldn’t prove this isn’t something that Rowling tacked on after the fact; there was simply no hinting or nudging for the reader to make this jump on his own. If Dumbledore was always perceived as a gay character, why is there not a single hint in the series of 7 books? And what is the point of revealing it after all the books have been released?

Is it safe now?

Aunt May is dying. Peter has heard the bad news that science can’t do anything to save her life, but he’s not willing to let go, instead turning to the metaphysical for answers. Peter knocks on Dr Strange’s door for answers, but he won’t like what he finds out and his desperation will lead him to an ill-advised time-travelling jump tying into an earlier cryptic scene in JMS’ run.

Color me impressed. JMS had the whole thing planned for over 6 years before?

All in all, One More Day, despite expectations, doesn’t suck! Spider-man’s desperation is now tangible and his actions have a real emotional resonance. Better late than never.

Joe Quesada is making his big artistic come back with tihs storyline, and also deserves praise. First, for the amazing quality of the layouts and panel arrangements. Secondly for beating his track record and delivering the issues on time!

The back of the issue reprints MJ’s origin along with a very detailed Handbook profile, trying to compromise the actual continuity with the various retcons throughout the years like MJ always knowing Spidey’s identity, and Gwen’s secret pregnancy.

So the new New Warriors are really M-Day depowered mutant survivors donning tech-suits and new identities to stick it up to the Big Man Tony Stark. That’s fine and dandy, but Kevin Grevioux is missing the point when he’s dragging the revelation of the secret identities and the team’s origins so far.

It’s issue 5 now, one of the Warriors has just died, and I couldn’t honestly even remember who she is or why I’m expected to care. At this point I don’t even remember how many members they actually have, what anyone’s name is or their powers.

They can’t be very impressive anyhow, since they fail to fight off the Zodiac, but instead sit back and lick their wounds while a depowered ex-mutant waitress goes in alone against them. Death wish, anyone?

Paco Medina‘s art work is always well-suited for teen adventure books, although it clashes when the writer decides to take a sudden left into grim, bloody and gritty. I also have serious objections towards his rendition of former Morrison New X-Men graduates Beak and Angel, who became such darlings partly because of their average everyday looks and attitudes; now Beak is a muscle-bound idiot on mechanical wings, and Angel is a slim-waisted big-boobed teen bimbo instead of the chubby-assed trailer park trash we learned to love. I’m still waiting on an explanation as to why they would take up this cause when they have 5-7 young babies to raise at home, and noone to babysit for them.

As for the grade, this is probably the lowest I have gone in the last year. Bravo.

Are you one of those cheap bastards who won’t shell out $1.99 (seriously, under 2 bucks! Why are you being miserable) to read one of the 3 best comics out there!

Please, say it isn’t so!

Well, Image Comics are being super nice so they’re now offering not one, but TWO (count it), two ways for you to get addicted to this crack.

and now MySpace is offering the complete CASANOVA #8 issue for a download as a .CBR file (isn’t that kinda ‘extra cherry on top’ cool?). Issue 8 kicks off the ‘second season’ of the title with new artist Fabio Moon and a perfect jumping-on point for new readers.

A video fairytale with a didactic core. Starring a pop queen, a thieving sorcerer, a band of trovadours, and the court Jester who couldn’t keep his mouth shut.

The ingredients of this little story, in video:

Music, is quite good, ‘Clocks’ from Coldplay

Piracy, is of Greek origin, ‘Thelo Na Se Do‘ (I want to see you), from Despina Vandi, ‘composed’ by Greece’s #1 music man, Foivos

Start playing the videos, and do a bit of mixing, see if you can Spot The Difference.

This is where the Video Star, or VJ, comes in.

Guy Krief is a French-Greek who has been making waves with his part off-beat, part brain-dead way of presenting a music show, on Greek TV’s #1 (or is that ‘only’?) music channel, MAD TV. Last week, he decided to push his luck, by commenting on the newly released Foivos song, and presenting a mix clip comparing it to Coldplay.

The Kill? That came after the show’s end, with Foivos and the company Heaven, ‘allegedly’, calling in the station, causing havoc and giving Guy the ax for his (=their) sins. Guy’s show Ninja TV was never seen again and the young VJ (the second most popular presenter on the station after the actual manager) was laid off.

After this, feel free to make your own conclusions; I’m feeling too happy this morning to get into Freedom of Expression, Media Hypocrisy and Survival of the Most Profitable.

Are you Mr Guy Debord?