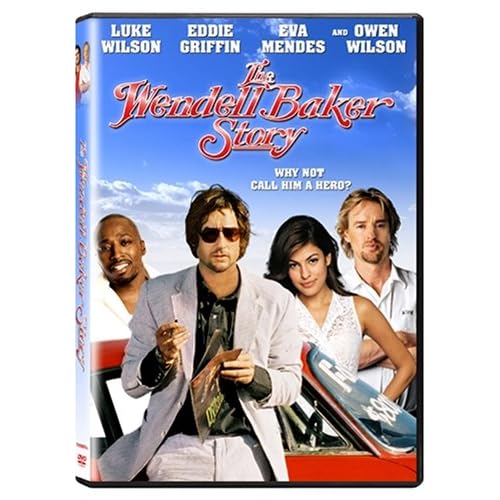 “I feel like a million pesos.” â€” Wendell Baker

Some years ago I received the DVD movie Lone Star State of Mind as a Christmas gift. It’s the type of movie that many would bypass in video-store chains and very few would stop long enough to catch on TV. Shot in Austin, Texas, the humor had a southern zaniness about it. Full of peculiar supporting characters. That type of humor can also be seen in Raising Arizona, Wes Anderson’s 1996 debut Bottle Rocket and currently on TV’s My Name is Earl.

The Wendell Baker Story can be added to that list.

Filmed in 2003, the comedy has resided in “Hollywood Hell” for close to three years. When the original production company, Mobius Pictures, went bankrupt, this project by the Wilson trio (Andrew, Luke and Owen) was an unfortunate casualty. But thanks to Think Film, the film finally sees the light of day, and just two years after a high profile screening at the South by Southwest Film Festival in Austin.

The production was during a transitional period for Luke and Owen Wilson. Both brothers started flirting with the idea of leading-man status; Luke had the edge working with the likes of Reese Witherspoon and Drew Barrymore. But Owen, the older sibling, either found himself working with Ben Stiller or Jackie Chan. Still, he could always revel in the fact that was the first Wilson to get an Oscar nomination â€” both he and friend Wes Anderson were nominated for Best Original Screenplay (The Royal Tennenbaums).

Taking a cue from his older sibling Luke decided to give writing a shot. A lover of 1970’s cinema and stars like Steve McQueen, The Wendell Baker Story is his homage. In it he stars as the titular character, a venture capitalist who makes fake Texas state driver’s licenses for illegals entering the U.S. Far from an honest living Wendell is apprehended in an undercover bust and is sentenced to a short stint in Huntsville Prison. His brother Owen is a bit of sadist as Neil King, the head nurse in the retirement home where the paroled Wendell gets a job.

The time in Huntsville Prison was not a wasted opportunity. Like Earl Hickey winning the lottery only to have karma intervene on My Name is Earl, Wendell behind bars was a wakeup call. Soon he becomes a reformed member of society. Working with old people is his ethical cleansing. It is in the Shady Grove retirement hotel where the story takes shape, and where a few cinema stars of yesteryear shine.

Seymour Cassel and Harry Dean Stanton are Boyd and Skip, two residents who don’t like Neil King. Despite both being long in the tooth, both are as virile as ever and are capable of knowing that Neil and his assistant McTeague (Eddie Griffin) are up to no good. They want to leave the retirement home in the worst possible way, whether it is to get some smokes or to get laid.

Luke and Owen may be the two headlines of Wendell Baker, but it is Cassel and Stanton who make the most of their time on screen. Cassel, an industry legend, has worked with the likes of John Cassavetes and Warren Beatty. His recent work of late pales in comparison to his Oscar nominated role in Faces, almost like Hollywood forgot about him. Wes Anderson found him easy to cast in three of his projects and now have Andrew and Luke Wilson.

Harry Dean Stanton has fared better. From Alien to Escape from New York to his collaborations with David Lynch, Stanton’s been around. Which makes the pairing of him and Cassel all that much greater â€” two legends tag-teaming it retirement style. For one scene their interaction with two adolescent girls in a convenience store is classic, especially Cassel telling one of them he can find a certain “spot” in five seconds.

Far from a classic, this first film by Andrew and Luke Wilson is shot in a style that does not have a discernible time frame; the setting could easily be the eighties or nineties. With a fun ensemble and carefree nature, this is a situational comedy that people will either find the humor or they won’t. It is not profound, but rather light and easygoing. You should be entertained. I’d bet one of Wendell’s fake I.D.’s on it.

This DVD has a nice presentation. The audio is not overpowering, making the dialog easily discernable. The video, while not pristine, is of good quality. It is presented in 16:9 anamorphic widescreen and the audio is 5.1 Dolby Digital. Austin has always been a venerable hot bed of activity and the locations Andrew and Luke Wilson have selected have an aesthetic quality that’s pleasing to the eye. The movie also comes with optional Spanish subtitles and English subtitles for the hearing impaired.

There’s no shortage of supplemental material. Aside from a trailer gallery, photo album and a musical performance by Billy Joe Shaver, we also get a short making-of that highlights the production and characters (including Luke’s neurotic dog Brother), some good deleted scenes and an audio commentary from Luke and Andrew Wilson. The best extra however is Afternoon at Luke’s with Harry Dean Stanton and Seymour Cassel. A little over twenty minutes in length, it’s Andrew and Luke Wilson and the “real” stars of The Wendell Baker Story chatting. Andrew talks with Seymour while the two are driving to a restaurant to meet up with brother Luke and Harry. Luke drives another car with Harry riding shotgun. Audio commentaries are good, but conversations have a more intimate feel to them, as the fondness resides in seeing a favorite actor in a relaxed state. This discourse is no different. We learn how Cassel and Stanton got into acting, Stanton’s musical tastes â€” he’s performed with the likes of Bob Dylan and Willie Nelson â€” and how Cassel working in Texas is some sort of punishment. (He of course is joking.)

The Wendell Baker is one of those unfortunate casualties when it comes to movie distribution. Having remembered hearing about it at the SXSW festival in 2005, it’s a shame a large theatrical release never came to fruition. Compared to the comedies that make it through the studio system, this Wilson brothers picture is a welcomed surprise. Luke Wilson as a huckster with a worn through suit may have some good laughs, but it is Seymour Cassel and Harry Dean Stanton that leave a lasting impression. With a cast list that also includes Eva Mendes and a special appearance by Will Ferrell, Wendell Baker deservedly needs to find an audience on DVD. Hopefully it will.