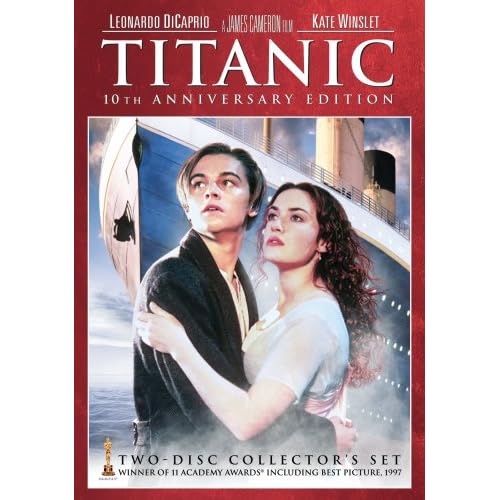 Titanic was expected to be the biggest box office bomb in history. Industry pundits suggested that it would join Heaven’s Gate and Cleopatra in the pantheon of cinema excess with its $200 million budget. When the release date was pushed from the summer to a week before Christmas, the haters tasted blood in the water. They predicted a watery grave. Instead of sinking like the title ship, the film earned over a billion and a half dollars. It won 11 Oscars. Titanic became a lesson in how a filmmaker could go completely overboard and become rewarded like a God. After a decade, is it still worth watching? Should you go back to Titanic?

Inside a submarine, Brock Lovett and his crew explore the Titanic for artifacts. The mission’s goal isn’t to provide elements for a public museum. They have one item on their mind. They want the priceless Jewel of the Sea necklace. They’re in it for the money and fame. Unfortunately the best they do is recover a drawing of a naked woman posing with the necklace. An elderly woman claims she was the girl in the drawing. She comes out to the salvage ship and tells her tale of surviving the Titanic. The movie dissolves into the past. We’re given the story of a rich girl who hates her stifling life as a socialite. She despises her fiance since he doesn’t understand her needs. She finds shipboard love in the rescuing arms of a poor boy from Wisconsin who charms her into stripping down for the naked drawing. Their forbidden love must survive the jealous fiance and one of the greatest transportation tragedies of all time. Can love withstand an iceberg?

After a decade, Titanic still entertains on an epic scale. It’s far from a perfect film. The script is so wooden it could have kept the third class passengers afloat. There’s a reason those pages weren’t Oscar nominated. The actors and special effects keep the production from sinking. Kate Winslet remains gorgeous even as she shivers in the cold Atlantic water. The ladies always shed a tear as Leo slips away. Men remain mesmerized as the luxury liner snaps apart. Titanic creates the proper date movie atmosphere with romance for the ladies and big things smashing up for the guys.

The picture is 2.35:1 anamorphic. The video transfer is mint. It appears to be the same master used on Titanic: Special Collector’s Edition.

The soundtrack is in English 5.1 Surround EX, 6.1 DTS ES and 2.0 Dolby Surround. There are also a French and Spanish dub tracks in 2.0 Dolby Surround. The subtitles are in English. There are three separate commentary tracks. The first is James Cameron by himself. He’s gets a kick out of letting us know about all his movie magic. The cast and crew commentary involves producer Jon Landau, Billy Zane, Bernard Hill, stunt coordinator Simon Crane among others. Their comments are edited together. Finally there’s a historical commentary featuring Donald Lynch and Ken Marschall. The duo had worked on the set as the historians making sure the visual elements were accurate. They don’t give us a three hour academic lecture. Instead they casually share insights into what were seeing and how it relates to the realities of that fateful journey.

The Behind the Scenes Mode allows you to stop the film and watch short videos detailing what went into the film. You can also watch all of them at once in case you don’t want to interrupt your viewing of the feature film. You’ll be impressed at what it took to sink and resink a ship. The thirty pods on disc one last thirty one minutes and thirty seconds. The thirty one different pods on disc two run twenty minutes. You get see the making of Celine Dion’s music video.

Alternate Ending (9:29) is the original scripted ending. There’s a bit more to Rose’s final action at the back of the salvage ship. Cameron’s commentary track explains that he retooled the final minutes since it felt more like a novel than a film.

Music Video (4:43) is Celine Dion’s “My Heart Will Go On.” The transfer isn’t nearly up to the quality of the film.

The Inside Pulse
Titanic: 10th Anniversary is a trimmed down version of the Titanic: Special Collector’s Edition‘s 3 DVD set. A majority of the deleted scenes were not ported over. Because of the running time, they spread the film over both DVDs. The first DVD (1:47:53) ends with the scene where they realize the ship is doomed because too many hull sections had been busted open by the iceberg. The second DVD (1:26:51) opens up with Billy Zane slapping Kate Winslet in the stateroom.