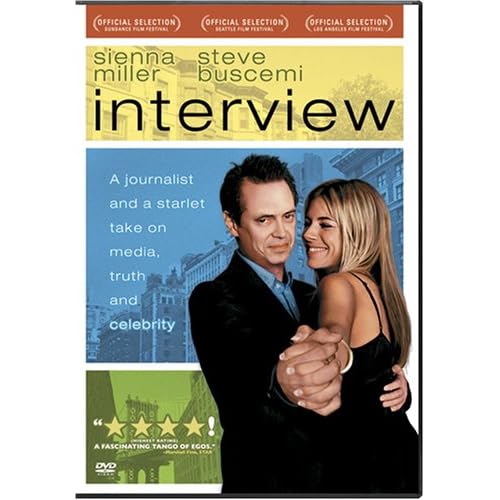 Before Theo Van Gogh was brutally murdered by a Muslim extremist in 2004 for presenting a film about violence against Muslim women, there had been plans to adapt three of his Dutch films for an American audience. The first was to be Interview, about a political reporter and his interview with a pop star. While Van Gogh’s murder prevented him from being able to direct an English version of his film, it didn’t prevent the film from being made. Steve Buscemi, already slated in the lead role, would take over directing duties as well. Given a limited release, the film never found an audience in theatres.

Katya (Sienna Miller) is a television star with a Britney Spears-type personality. She’s a tabloid star known more for her changing bust line and a seemingly revolving door into her bedroom, and she becomes the interview subject of Pierre Peders (Buscemi). Formerly a political reporter of some repute, he’s less interested in her and more interested in a breaking story in the capitol. As the night goes on, the two engage in a verbal seduction of sorts, leading from the restaurant where they meet to her loft for a night where the perceptions of both change radically.

What makes the film especially interesting is in how well it matches up with the original, but that’s not surprising because the bulk of the crew from the original Interview were brought over to work on the remake. Buscemi wisely chose to follow Van Gogh’s blueprints for the first film and replicated the way he’d have done an American version of the film. It’s a touching tribute and he does really well behind the camera; the cinematography is first rate and the story-telling is really good. Buscemi does a credible job as director; if not for following near to the hilt of Van Gogh’s earlier work it would be a terrific piece for his name to be on as director. It makes for a good film, but not a great one. That’s left for a script devoted to two wholly unlikable characters.

Neither Pierre or Katya are likable enough to get involved with as a viewer. While both Miller and Buscemi give wonderful performances in the parts, both of their characters are sleazy. There’s no vested interest in seeing their game of verbal marksmanship because we don’t like either of them. While this also was a problem with the original, as both characters were even more unlikable, it’s still a problem.

Interview is a touching tribute to a fallen director, then, and an interesting experiment in acting for one of America’s premier character actors. It isn’t, however, the sort of great little independent film it could’ve been.

Presented in a Dolby Digital format, with a widescreen presentation, the DVD looks and sounds wonderfully. This isn’t a film with lots of scenery changes or a booming soundtrack, but for what it needs to do it does so cleanly and clearly. The picture is pristine and comes through vividly while the audio behind it is top notch as well.

Previews for Angel-A, Moliere, Youth without Youth, Paprika, Vitus, Romance & Cigarettes, The Jane Austen Book Club, When did you last see your father?, The Counterfitters and a generic “Coming to Blu-Ray” advertisement.

Interview: Behind the Scenes is a look back at the making of the film. With Van Gogh’s tragic death taking him away from the directorial duties he had been attached with, Buscemi volunteered to direct the film in his stead. The feature runs about six minutes and is relatively interesting, but as soon as it seems to get going into a direction about making the film it disappointingly stops.

A Commentary with Director/Star Steve Buscemi is also on the DVD.