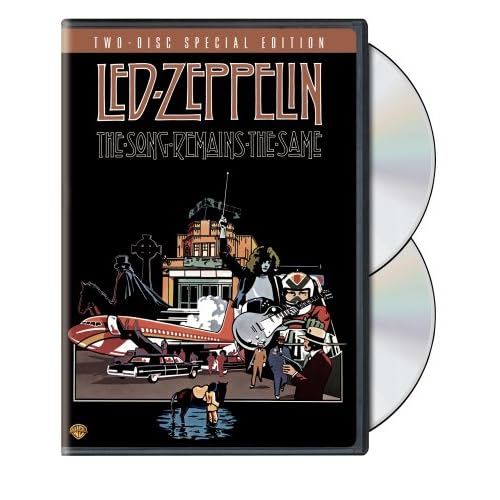 There are few who would argue the fact that Led Zeppelin is the greatest rock n’ roll band there’s ever been. (I know a few of them.) So it comes to no surprise that at some point they were going to do a concert movie. However, Zeppelin didn’t want to give their fans just a concert movie. They wanted to take the opportunity to do something more, something unique. That something was The Song Remains The Same.

The film opens with a mobster getting in his car and doing a drive-by on a group of other mobsters. One of these mobsters is the Wolfman and another has no face. From this moment on you know this isn’t going to be an everyday run-of-the-mill concert film. Zeppelin decided to cut together live performances, backstage footage, newsreel footage and each band member gets an elaborate fantasy sequence of their own devising. The aforementioned scene was the mangers.

Many of the songs they do are epically stretched out to 20-30 minutes, like “Dazed and Confused” and “No Quarter”. It is these long instrumental jams that provide the tapestry for the fantasy sequences. In singer Robert Plant’s fantasy he rides on horse back with sword in hand to fight of villains and save a princess. Each band member’s fantasy is unique and varied from the others making each distinct and memorable. Other songs, like the definitive performance of “Stairway To Heaven,” are left in their entirety as concert scenes. It is these moments that cement the bands rock God status. To see them in their element, live on stage, is truly a sight to behold.

This is a wonderful concert film with extra elements added to elevate it above what is expected. Each if these musicians is a master of his craft and as a whole they are very impressive to watch. You have an appreciation for rock n roll at all then you will enjoy this film.

This film is presented in 1.85:1 anamorphic widescreen. Sound is in Dolby Digital Surround 5.1, DTS Surround, and Dolby Digital Stereo. Has English, French, and Spanish Subtitles.

Before going into the details it must be noted how these extras are set up. There is a “play all” function which is good, because they are designed to kind of flow together. Each section being separated by a song that was cut from the live show. This is a really solid run of extras:

Tampa new Report: (3 min.) This is very square news report about how a Led Zeppelin Tampa show broke the record for the most tickets sold for a single rock show. It’s really funny how lame this is. They even mispronounce John Bonham’s name.

Over The Hills And Far Away: (6 min.) The first cut song, a great performance.

Boating Down The Thames: (8 min.) A really great interview with Robert Plant and manager Peter Grant. The interview takes place while boating down the Thames River (hence the title).

The Robbery: (5 min.) Only touched on in the film. This is the full news report about the robbery that took place after the concert.

Misty Mountain Hop: (4 min.) Third cut song. Can you guess how good it is?

Radio Profile Spotlight by Cameron Crowe (1976): (15 min.) It’s well known that before Cameron Crowe was a filmmaker he was a young kid writing for Rolling Stone (we’ve all seen Almost Famous by now). Anyway, this is more a love letter than a review that Crowe did of the film. He sounds young and you can tell he just loves this band and this movie. Very fun to listen to.

The Inside Pulse
This is a classic concert film of the greatest rock band there ever was. You’ll most likely never going to get the chance to see them live so this will have to do. If you like rock n roll, you can’t go wrong with this.