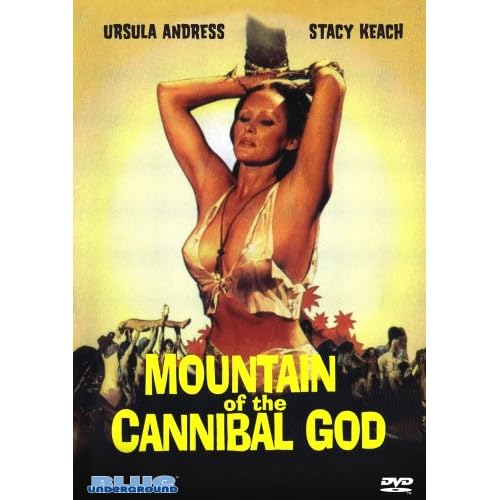 Blue Underground has released three b cannibal films all from different directors. The cannibal film is a fascinating subgenre that was exploited mostly by Italian filmmakers in the 70’s. If you’ve seen a cannibal film then you know what to except: they usually take place in a jungle and they feature gratuitous nudity and gore. None of these films is an exception to that.

First up is The Cannibal Man which is blatant false advertising because at no point does he actually eat anyone. While on a date with his fiancé, Marcos gets in a fight with a cab driver and accidentally kills him. When his fiancé wants to go to the police he kills her. When his brother won’t help him cover it up he kills him. Then his brother’s girlfriend comes looking for him and the girlfriends father comes looking for her. You get where this is going. Marcos works at the local slaughterhouse and uses his job to dispose of the remains. Meanwhile a new guy in town seems to be showing a romantic interest in Marcos. Huh?

This film may have been disturbing by 1972 standards but now the film is very dull and plods along. Sure the death scenes are pretty gory and there’s some nudity but there are good films that have that stuff. Plus it’s an Italian film and it’s poorly dubbed in English, which, depending on how you look at it either adds or continues to subtract from the film. Then to top it all off the ending is just stupid.

Up next we have La Montagna Del Dio Cannibale, or Mountain Of The Cannibal God. This film is both the best and worst film reviewed here. It’s the best in the sense that the acting is far superior (although still not that good), the scenery is breathtaking and the other technical aspects like cinematography, editing, etc are all very competent. The dubbing is even a little better. However, it is the worst because it contains some horrifically graphic scenes that frankly I wish I could erase from my memory. All the fake stuff is fine, you know the killing and eating of people and such. But like the infamous Cannibal Holocaust this film contains scenes were animals are actually killed, which is just upsetting to watch no matter how you look at it. In one scene an iguana is ritually gutted and the most appalling is a python eating a monkey. I had to fast forward this scene cause I wanted it to end. And to top it all of it features plenty of gratuitous nudity, bestiality and a violently graphic castration.

I suppose I should talk about the plot a bit. This is story of Susan Stevenson who’s husband disappeared on a distant island and she wants to go find out if he’s alive or not. She travels with her brother and a friend of her husbands as well as some natives. Along their long journey each of the natives is picked off one by one either by the cannibal natives that are tracking them or dangerous animals of the jungle. What is more interesting about this film than the others is that the characters are actually pretty well developed and have there own hidden motives, they aren’t just stereotypes. The film is a contradiction because the majestic scenery is wonderful to watch but the awful things happening in those scenes is, at times, just too much.

Our last film is simply titled Cannibals and is all types of bad. Jeremy is a scientist who studies tropical diseases. While on an expedition in Moabi his boat is attacked by cannibals. His wife is eaten alive and his daughter is kidnapped. Jeremy loses an arm before managing to escape. He is found in the jungle where he is returned home. He loses his mind for a while and no one will believe him about the cannibals. Finally he is able to but together another expedition to go back and find his daughter. But he will not like what he finds.

This film is obviously trying to ride on the coattails of Cannibal Holocaust and fails every step of the way. The skull on the shaman’s staff is obviously rubber and the bottom jaw is constantly wiggling. The cannibals are the sorriest bunch I’ve ever seen. They look like a bunch of white guys in face paint and they glance at the screen from time to time. When the hero gets his arm cut off it is pathetically obvious that he is just hiding his arm under his shirt. The acting is laughable and this film is also dubbed in English making it even funnier. However despite the laughs this film is a far cry from entertaining.

None of these films is very good but Mountain blows the other two out of the water. So I suppose if you really want to see one of them that is the way the go, but I find it hard to recommend any of these films to anyone.

Each film has a trailer.

Mountain Of The Cannibal God:

Legacy OF The Cannibal God: (13 min.) This is an interesting interview with the director. He talks about the locations and the actors and all the normal stuff that is talked about in these things. The interesting thing to note is when he talks about the python eating the monkey. He says it was an accident, it wasn’t meant to happen but when it did they filmed it. Right after they pause a frame of film and this caption appears: “A frame-by-frame analysis of this scene reveals an optical effect used to conceal something that the monkey was attached to. The device was apparently used to thrust the monkey into the mouth of the python.” It’s horrible that the director could just lie like that and it is interesting that the producers of this DVD would choose to calm him out on it. Later he claims the film had “no pornographic content” which if followed by a montage of graphic images from the film.

Franco Holocaust: (20 min.) This interview with director Jess Franco is ten times more interesting than anything in the film. He talks about how he didn’t like cannibal films like Cannibal Holocaust, but when he was asked to direct one he did it anyway as long as he could to it the way he wanted. He talks candidly about the production admitting that while his lead was not a good actor he was a nice guy. He also says that his female star was completely stupid. To quote: “She was very pretty, with a very nice body, and completely stupid. Completely.” And that’s not the nastiest thing he says about her. The rest can’t be printed here but his very hilarious. This interview almost makes you want to like the film, but it’s just so bad.

The Inside Pulse
Of the three films the most interesting thing is the special feature on Cannibals, however, the movie is the worse of the Bunch. If I had to recommend one of these films I’d say go with Mountain, but keep in mind it does contain many ghastly images and is not for everyone.