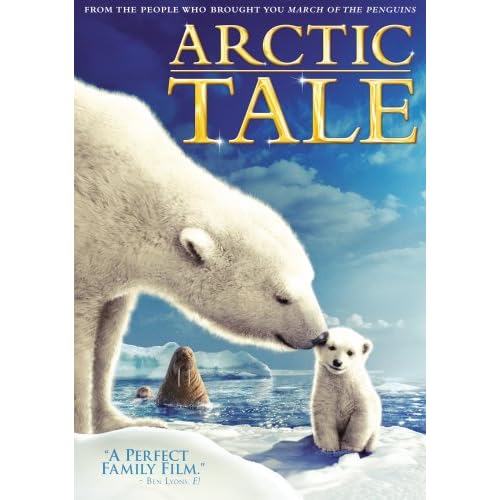 “March of the Penguins” started it all. The little penguin documentary stole the hearts of the entire world with the message of enduring love and hope. Then the studios got greedy and we were given “Happy Feet”, which won an Oscar, so we got “Surf’s Up”. By the time “Surf’s Up” hit theaters, the public were on penguin overload. So now we get “Artic Tale”. A documentary with the message of enduring love and hope…about polar bears and walruses. Not necessarily as cute and marketable as penguins.

When “Arctic Tale” came out this summer, the marketing was sub-par. Touted as being “by the studio who brought you ‘March of the Penguins'”, a mass eye rolling and sigh heaving could be heard by audiences who heard this claim. Another one? Already? Had it isolated itself from the “March of the Penguins” fame, “Arctic Tale” could possibly have done better in theaters.

“Arctic Tale” tells a very sweet story about Nanu, a female baby polar bear and her life growing up in the Artic, and tells a very sweet story about Sela, a female baby walrus and her life growing up in the Artic. The story goes back and forth about how the babies learn to hunt and to avoid danger. The polar bear mother teaches Nanu and her baby brother lovingly, but with a firm hand. The walrus mother, instead of teaching at a very young age, cuddles with her baby, making sure the baby is loved and fed. Very similar to a human mother. The story of Sela and the walruses is much more touching and relatable than the story of Nanu. In fact, despite the DVD cover and all advertising for the film, the walruses are given prime screen time over the polar bears.

In fact, after we are introduced to these great stories with great characters, the story itself goes absolutely nowhere. Instead, the film switches tones and becomes another PSA about global warming. Not that it’s not an important topic that needs to be brought up, it’s just that this movie didn’t do a very good job of incorporating that angle. The shift from “sweet PBS style documentary” to “in your face global warming PSA” is so awkward that I groaned out loud when it hit. Then when the movie returns to telling the stories it began telling, the film is over and over the credits we are bombarded with children giving us tips on how to go green.

The performance by Queen Latifah as the Narrator didn’t help the cause one bit. She sounded so dry and scripted, like she wasn’t having any fun at all. In fact, the movie wouldn’t be much fun if it weren’t for the soundtrack. I have to hand it to whoever picked the music to this movie, they did an excellent job. The music saved the film. The peppy soundtrack that included artists such as Aimee Mann, Ben Harper, Brian Wilson and the Shins really deterred the film from the dim and grim save the world message it was trying for.

The Video:
Widescreen Enhanced for 16:9 TVs. If you decide to watch this one, the visuals are spectacular and beg to be viewed in widescreen.

The Audio:
The sound is provided here in your choice of either Dolby Digial: English 5.1 Surround, English 2.0 Surround, French 5.1 Surround, or Spanish 5.1 Surround. Since the natural sounds of the Artic are few and far between, since they have a Narrator and music playing over them, the sound quality doesn’t matter all too much. Subtitles are available in French, Spanish, and English.

The Extras:
Making of Artic Tale – This behind the scenes documentary about the filming of the movie is more interesting than the movie itself. Director Adam Ravetch has such passion for making the film and such a love of his subject matter, it’s really more inspiring than the PSA that is thrown at us during the movie. Caution though, this featurette is long: 24 minutes.

Are We There Yet? World Adventure: Polar Bear Spotting – A seven minute how to on going polar bear spotting yourself. Personally, it’s a bit too cold for me.

The Inside Pulse
Overall, when comparing Arctic documentaries, “March of the Penguins” rules. “Arctic Tale” is too unsure of itself in what it’s really trying to accomplish, making it too boring for kids and too childish for adults.