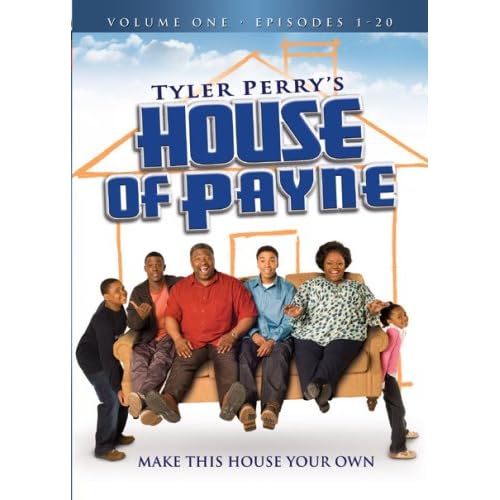 Tyler Perry has become quite the entrepenuer these days. He got his start back in Atlanta, Georgia, where he wrote plays that were performed on the “urban theatre circuit”. They soon became cult favorites. Next, he went on to direct two surprise hit movies based off of two of his plays, Diary of a Mad Black Woman and Madea’s Family Reunion. That is when the whole world started to really know the name Tyler Perry. Perry was soon given a shot at producing a television series for the cable station, TBS. After a successful pilot run in the Spring of 2006, Perry signed a $200 million 100 episode deal to produce that show, House of Payne.

House of Payne centers on the Payne family, who live in Atlanta, Georgia. Pops (LaVan Davis), an Atlanta fire chief, and his patient wife, Ella (Cassi Davis) are just starting to get used to living without their son, Calvin (Lance Gross), in their house. Their life and home get disrupted, though, when a house fire forces Pop’s nephew, C.J. (Allen Payne), C.J.’s wife, Janine (Demetria McKinney), and their two kids, Malik (Larramie Shaw) and Jazmine (China Anne McClain), to move in, bringing together three generations under one roof. As chaos erupts, it soon becomes evident just how wide the generation gap is as this family attempts to survive the ups and downs that life throws at them.

This series is like any traditional family sitcom. It is mostly comedy, but there is some drama thrown in to keep things interesting. But nothing too serious as this is a comedy television show first and foremost. The storylines are pretty typical and can be found in any family show. So as far as that goes, this is not an unique idea for a show.

Despite this being a TV show, this is a typical Tyler Perry production. The recurring themes of family, God, and love that are found in Perry’s plays can be found in every episode of this series. So you know what to expect here. You will also recognize almost every member of this cast as the majority have worked in Tyler Perry’s previous works. That being said, the acting could actually improve a little bit. Most of the time, the cast seems to be just “going through the motions”. In addition, the lead stars and characters don’t seem polished enough to carry this show like they should.

While this television series is not the funniest Tyler Perry production ever, mainly due to the lack of Madea, it is still somewhat entertaining. Madea does make one appearance in this first volume of House of Payne, but she is definitely not a featured member of the cast. House of Payne is a standard family sitcom with a Tyler Perry spin to it, meaning that there are positive messages everywhere to be learned in every episode. It’s certainly not an original idea for a sitcom nor is it something totally different from Tyler Perry’s plays and movies. If you enjoyed all of Tyler Perry’s work without Madea in it, you will probably enjoy this series. But if happen to miss this show, you won’t be missing that much.

Episode 1 – Bully and the Beast
While Janine proceeds to become more unaccountable and less reliable Malik is being bullied at school.

Episode 2 – I Can Cry If I Want To
While the family contrives a surprise 50th birthday bash for Curtis, C.J. moves in with Ella and Curtis when his house burns down.

Episode 3 – More Than Meets the Eye
While Jazmine misses her toys and friends, C.J. has suspicions Janine is cheating on him and is concerned about her unsettled behavior.

Episode 6 – Down and Outted
C.J is dispirited about his life and his wife. Curtis sees Malik wearing a tutu.

Episode 7 – No Money, Mo’ Problems
While Calvin shows off “his” house to a girl C.J. puts Janine in rehab after accepting money from Curtis.

Episode 8 – Just Say No
While the firefighters have a “Sick Out” Jazmine is stirred by a “Say No to Drugs” seminar at school.

Episode 9 – Surprise, Surprise
Janine’s righteous parents come to the Payne’s household looking for her. CJ informs them of her serious personal issues.

Episode 11 – I Keep Coming Up Short
While CJ attempts to guard off creditors, Curtis who has intimacy troubles with Ella, looks for help from the firehouse gang and from his anger management coach.

Episode 12 – The Buck Stops Here
The firehouse guys fire up fund-raising concepts for charity–selling calendars. Jazmine, who is going out to sell candy for her school, receives commerce pointers from Calvin and makes a bundle. When the expected new firefighter turns out to be a woman, it stirs up their male-dominated world, starting with their calendar sales.

Episode 13 – Wax On, Wax Off
When Malik gets excessively consumed with taking showers, Ella worries that he has OCD. In the meantime with help from Curtis the firehouse crew gets ready for the annual inspection.

Episode 14 – Head of the Class
While Curtis and Ella enter in an art class jointly, Jazmine makes up her mind to enter politics by running for school president.

Episode 15 – Paternity and Fraternity (Part 1)
While Malik is raising concern about the company he keeps, CJ’s life is turned upside down when he finds out that he may have fathered another child.

Episode 16 – Paternity and Fraternity (Part 2)
The finding that CJ might be the father of another child continues to be a family issue.

Episode 17 – Cracking Under Pressure
Janine comes back with friends in tow, simply to make off with belongings from the Payne home.

Episode 18 – Club PCP
Calvin throws a house party when the Paynes take a trip to Florida. But a fire might ruin his plans for a house party.

Episode 19 – Sadly Mistaken
While Calvin screws up his efforts to cram for college test Ella becomes a victim of mistaken identity and is arrested.

Episode 20 – And Justice For All
In order to get out of jury duty Curtis wheels, deals, and spiels. Somewhere else Malik creates his Internet profile and dives into the computer dating pool

The video is given in fullscreen color with an aspect ratio of 1.33:1. Transfer is good with minimal distortion. There are no problems at all here. Pretty standard stuff for a cable television sitcom.

“The House That Tyler Perry Built” Featurette –
This featurette runs 12 minutes and it’s basically Tyler Perry talking about how this show was created. Tyler also talks about how he cast the show and everything else you wanted to know about the show.

If you are a fan of all of Tyler Perry’s plays and movies, you will more than likely enjoy this television series. But it pales in comparison to Tyler Perry’s plays. There is not much Madea to be found in this first volume of the show either, so be warned. It’s certainly not very original so I can only recommend a rental, except for harcore Tyler Perry fans. You could compare this show to The Cosby Show or the Fresh Prince of Bel-Air, except that this show is nowhere near as good as those two shows.