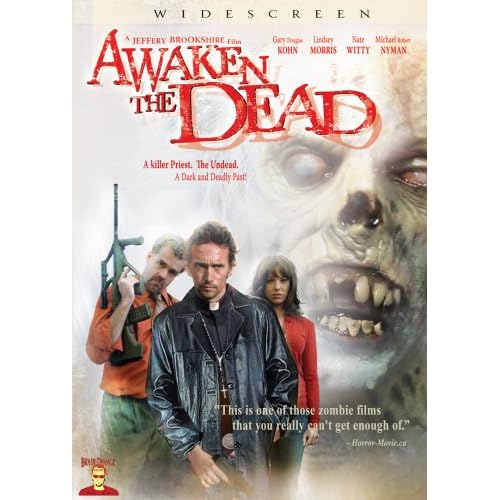 I knew I was in for a treat, when my screener copy of Awaken the Dead arrived in the mail. I knew this thing, because it looked as though the DVD were burnt on somebody’s old IMac, with a label made up in Clarisworks stuck on top.

The fun didn’t stop, when I put the disc into the DVD player, and the movie began playing immediately. We didn’t waste any time with trailers, set-up, scene selection or anything like that. I’m sure that this is at the request of the director, Mr. Brookshire. “Set-up, Shmet-up. These people will watch the movie how I tell them to watch the movie! No subtitles or closed captions or any of that jive! And you can watch it in any language you want, so long as its English! And none of this scene selection junk! That’s for pantywaists! They’ll start at the beginning and end at the end, as GOD INTENDED!”

(Mr. Brookshire is also the film’s writer, editor, and a producer. Sadly, this is only a 0.4 Olga Levens.)

I’m sure that this impassioned, yet entirely fabricated, speech the reason why Awaken the Dead doesn’t bother with such trivialities as commentary tracks or even a root menu.

In a shocking twist, it is the SAME HOUSE!

At this point, you might be put off by the weird echoing quality of the sound, the distracting soundtrack, or the strange pixelation of the video which makes it looks as though it were shot exclusively on camera phones.

Christopher and Mary hang out for a bit and exchange some blaxploitation-worthy dialogue with a giant pimp. That is, at least, until Mary scares him (and the local Jehovah’s Witnesses) away with the massive samurai sword she just happens to have lying around the house.

Gary Kohn seems to be playing his role as the drunken hipster priest as sort of a hybrid between Dr. Gregory House and Sheriff Seth Bullock. The end result is a watered down Snake Plissken. Kohn does bring some inexplicable charm to this thing.

The films picks up just shy of the 18 minute mark when the zombies start popping in. “Where did the zombies come from?” you might ask. Well, you see, two porn-star-ish women in school girl outfits looked up at a passing plane. The next thing you know, they’re eating the pimp’s belly. (My mom always told me the dangers of staring at the sun. I wasn’t aware that this was one of them. At any rate, it is as good an excuse for zombies as military gas or rage-infected monkeys.)

I should be noted that during many of the action sequences, things go into slo-mo mode and the screen gets all blurry, somewhat evocative of a ’80s hair band music video. There are also a couple of stabbings that are about as convincing as that time you tucked a plastic kitana under your armpit and pretended to be impaled.

So, some survivors start piling into the house: namely, one of the effete and effeminate Jehovah’s witnesses, a crazy marine (played by Sylvester Stallone’s cousin/Cobra stand-in Paul Dion Monte), and the marine’s infected girlfriend. So for a little while the movie turns into a poor man’s Night of the Living Dead meets Clerks. A good number of the characters in the film seem completely unfamiliar with the concept of zombies, which strikes me as odd.

Oh, and a random guy in a trenchcoat is spying on the house, making no effort to be covert in his spying. Which, kind of makes it not spying at all, more like gawking. At any rate, he seems to have struck a deal of mutual obliviousness with the zombies. Maybe zombies can be reasoned with. . .

Luckily for this ragtag group of survivors, the priest just happens to be a former government assassin. And the house is bullet-proof, which the priest can tell just by looking at the window.

Oh and the zombies don’t seem to be able to competently navigate such hazards as vertical blinds.

After the priest has some meaningless sex with Mary, who turn out to be both the daughter of his assassin mentor and a prostitute, the infection gets inside the house. There are some more action sequence, culminating in the priest getting his eye ripped out by some zombies.

Down to three survivors but armed by the hidden weapons cache of Mary’s dad (which just happened to be lying around the house), the team decides to flee the house for some random church. So the Witness, the psychotically moody Mary, and the Priest 2.0 (now with an eyepatch that also just happened to be laying around Mary’s house) head off to kill some zombies. Yup, Christopher has an eyepatch now, completing his transformation into Diet-Snake Plissken.

Along the way, the group picks up a random black chick. She has very few lines and is killed off unceremoniously.

It should be noted that one should not emulating the reckless shooting habits of the characters in this film. They tend to do things like aim towards their friends in order to shoot zombies, blissfully unaware that bullets can go through things.

All in all, once this film breaks the goofy meter (which it does about halfway in), it is pure d-movie fun.

Sure, the audio and video quality is pretty low.

And the dialogue is pretty hacky.

And the monologues are fairly embarrassing.

And the characters are caricatures.

And some of the people attempting to act in this movie shouldn’t even be filmed giving a speech at a wedding.

And the story reads like it were written by the boys of Sister Mary Theresa’s 7th grade class while the girls went off to watch a video about their changing bodies.

And the Brookshire blatantly steals a number of shots from superior directors (and uses said shots inappropriately).
(For a detailed list of from whom he steals, read about Brookshire’s influences on his CV the IMDB.com biography he, most likely, wrote for himself.)

But I’ll be danged if Awaken the Dead doesn’t provide some sort of silly entertainment I feel like evangelizing. I, inexplicably, want everybody to see this film for some reason.

Balancing out these qualities leaves us with a rating of 5.