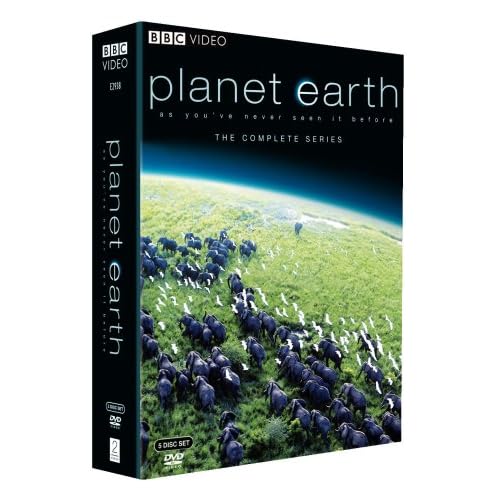 The Show
Nature documentaries have been a television staple for just about as long as there has been television. From Jacques Cousteau’s expeditions to Marlon Perkins hosting Mutual of Omaha’s Wild Kingdom, television producers have sought to bring the wonders of the deep, the savage beauty of the deserts, and the thrill of running with the pack as it makes its vital kill. So what makes Planet Earth unique? It is the scale of the production in both its intent and the technology employed coupled with a growing global awareness of the fragility of the earth and its ecosystems. Planet Earth shows us a remarkable, diverse, and beautiful world and can either serve as a celebration of Earth, or its obituary.

The show spans five DVDs. Each episode covers one type of ecosystem from mountains to deserts to ice worlds. Instead of focusing on one type of animal or region, as most nature documentaries do, Planet Earth spans broad regions and does a wonderful job of illustrating the incredible interconnectiveness of the land, its animals, and the environment. And this is where the grandeur of the show comes in. Many of the scenes are shot from the air, giving a wonderful sense of perspective. It is one thing for a narrator to talk about thundering herds of bison with the camera showing only a ground view of the migration, and it is an entirely different thing to see that thundering herd swelling over the land like a brown tidal wave, or flocks of birds so thick they obscure the ground, or even fly larvae metamorphosing out of a lake in swarms so packed they look like columns of smoke. Many of the shots in Planet Earth are done from a perspective never before seen by both naturalists and the regular viewing public.

Planet Earth achieves this remarkable feat by employing state-of-the-art technology previously only used by large production movie companies. Quite frankly, the quality of this show is remarkable. The images, the sounds, the narration, and the music are top notch. This is a production that was undertaken with an incredible amount of care and attention to detail. Anyone interested in nature documentaries, the planet, or just documentaries in general should definitely check out this program.

Video
This production was presented in 16:9 enhanced widescreen. The picture is crisp and clear.

Audio
The audio track is Dolby Digital Surround. There is a great balance to the channels and strong directionality. The soundtrack, sound effects, and narration work well together and one never overshadows the other. In many ways this show would not be so immersive without the audio.

Extra Features
Behind the Scenes
A ten-minute featurette ends each episode covering different aspects of the production. At times these were interesting, but there were moments when I was tempted to skip past so I could go on to the next episode. The featurettes total about an hour and a half of footage.

Planet Earth—The Future
The fifth disk contains this companion series which roughly totals 150 minutes and is broken into three different sections: Saving Species, Into the Wilderness, and Living Together. This featurette covers the changes our world is experiencing at the moment due to humanity’s incursion, for lack of a better word, into the ever-shrinking wilderness and how it is affecting the ecosystem. The extras do a very good job of handling highly controversial subjects without becoming too preachy or smug.