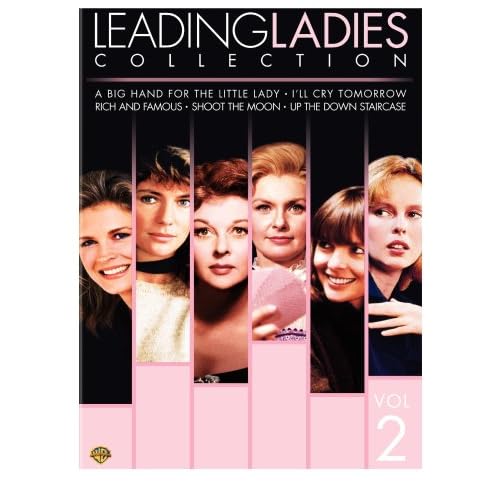 A Big Hand for The Little Lady
Director:
Fielder Cook

Up the Down Staircase
Director:
Robert Mulligan

Actresses complain about the lack of good roles in big Hollywood films. They get sick of being offered the bland homemakers and the hookers with hearts of gold. Leading Ladies Collection, Vol. 2 lets us see six actresses assume roles in five movies that allow them to stretch their dramatic muscles. None of them are merely the kitchen help or arm candy for the male leads.

I’ll Cry Tomorrow is the autobiography of troubled child star Lillian Roth. She didn’t start out as a wild child like Drew Barrymore. Roth (Susan Haywood) is ready to start adulthood by marrying her longtime sweetheart. Before their wedding takes place, though, he dies. Haywood won’t allow herself to stop touring to mourn his passing. She lives by the saying that the show must go on. She does hurt on the inside. Her stage mom isn’t much help with the pain. Roth finds sweet comfort in booze. In her drunken haze, she drifts through a series of bad marriages. She attempts suicide. She pawns her fur coat for a bar tab. Roth’s life does sound like Britney Spears’ recent tabloid headlines. Will Roth pull out of this abusive tailspin before she becomes a chapter in Hollywood Babylon? Haywood was Oscar nominated for her depiction of a downward spiral. She bubbles with a champagne glass in her hands. She shines when giving a drunk version of “Happiness is a Thing Called Joe.” Almost a shame to clean her up.

A Big Hand for the Little Lady seems like it would be a thankless project for an actress. The Western starts with a bunch of big shots in a town dropping everything for a high stakes Poker match. Amongst the high rollers at the table is Henry Fonda, a mere farmer. He literally bets the farm on a hand. The stress of the wager is too much and he has a heart attack before showing his cards. His wife, Joanne Woodward, fills in for her husband after he’s carted away by the doctor. She has a clue how to play the game, but can’t fold the cards. Her family’s fate in her hand. Everybody wants to know what she’s holding. This is quite entertaining for a Western that has no outlaws or Indian attacks. The ending payoff is worth all the chips. With all the Poker craze on TV, why hasn’t Lifetime tried to remake this movie?

Up the Down Staircase is a woman-in-peril film. Having survived an evening with Richard Burton and Liz Taylor in Who’s Afraid of Virginia Woolf, Sandy Dennis challenges the horror of an inner-city high school in New York City. She enters a public education system overwhelmed with aging buildings, overcrowded classrooms, lack of textbooks, students joining gangs, students having sex, teachers having sex with students and students attacking teachers. All the problems with today’s educational system are over 40 years old. Dennis isn’t used to this world. She’s recently graduated from a quaint college. She thinks students love doing extra credit work. She learns that her primary job is to be a lion tamer in the urban jungle. Teaching is not a priority in the classroom. The film focuses on her survival in the decaying system. Will this fragile beauty run back to the safe world of preppy private schools? The film feels like a Frederick Wiseman documentary about an urban school. There’s little Hollywood magic in the classrooms and hallways. This is as raw as the fourth season of HBO’s The Wire. You might get a chuckle realizing the school is run by Boss Hogg (Sorrell Booke).

Rich and Famous would have worked better in a Cult Camp Classics collection. The film has the pedigree to be great with Candice Bergen and Jacqueline Bisset under the direction of George Cukor. This is the tale of two lifelong friends who bonded as roommates at a private girl’s school. Bergen wanted to be the perfect wife. Bisset dreamed of being a respected novelist. Both achieved their dreams. Their fates become twisted when Bergen writes a book and becomes more famous as a writer than Bisset. Bergen’s husband puts the moves on Bisset. What will become of their friendship? The film tries too hard to be tawdry. Bisset has sex with a stranger in an airplane lavatory. This is no minor Mile High Club moment. They’re doing the nasty while the plane touches down. That’s not safe! Nowadays the couple would be arrested as terrorists for such shenanigans. Rich and Famous is as serious as a Jackie Collins’ miniseries. This makes a good double feature with Valley of the Dolls.

Shoot the Moon starts off with the extremely preposterous conceit of the 25th International Book Awards being broadcast live on TV. Do you remember your parents waking you up in the middle of the night so you could see who won Novel of the Year in 1981? How real is the rest of the film? A novelist (Albert Finney) has been cheating on his wife (Diane Keaton) of fifteen years. The oldest daughter discovers the affair. When Keaton and Finney decide on a divorce, the biggest victims are their four daughters. Things get nasty when Finney doesn’t want to give up his old life or let his wife get a new life. He can’t be happy hooking up with Karen Allen. While watching the film, it’s hard to imagine why Keaton married Finney in the first place. The film wants to be profound, but it just gets frustrating.

Leading Ladies Collection, Volume 2 is a mixed boxset with the roles varying in quality. I’ll Cry Tomorrow, Up the Down Staircase and A Big Hand for a Little Lady are top flight roles for their actresses. Shoot the Moon was a misfire. Rich and Famous wasn’t exactly Oscar bait for its leading duo. At least none of these women had to play hookers to make the rent that month.

VIDEO:
All five films are 1.85:1 anamorphic. The transfers are top notch.

AUDIO:
The soundtracks are Dolby Digital Mono. The subtitles are in English and French. Rich and Famous also has Portuguese subtitles. Alan Parker and Bo Goldman contribute a commentary track to Shoot the Moon. They sound like they’re doing a radio show on NPR. Goldman wrote the script after seeing his friends going through divorces.

EXTRAS:
I’ll Cry Tomorrow
Story Conference (20:22) is a short film starring Lillian Roth. You get to see the subject of I’ll Cry Tomorrow in the flesh. She does have a nice singing voice and plenty of youthful spunk. The highlight is dancing girls in revealing outfits working on the soundstage.

MGM Parade TV (10:46) are three clips from this show that promoted the upcoming films from the studio. The first one has George Murphy, the host, welcoming Haywood into his office. He shows off the MGM trophies. He wants an Oscar for Susan Haywood in the role of Lillian Roth. The second and third excerpts from the show feature Murphy introducing clips from the movie.

Unique Meeting at the Premiere of I’ll Cry Tomorrow (12/30/1955) (0:41) has Lillian Roth and Susan Haywood meeting at the cinema. They swap kiss for their adoring audience.

Theatrical Trailer (3:00) has one of the greatest slogans, “This story was filmed on location….inside a woman’s soul.”

Up the Down Staircase

Theatrical Trailer (4:24) pushes how the book sold millions of copies.

Rich and Famous
On Location with Rich and Famous (6:32) show George Cukor being very animated on the set. He doesn’t seem to be aware that he’s making Valley of the Dolls 2.
Theatrical Trailer (2:40) lets us know that their friendship wouldn’t be perfect. You are warned that their life goals will flip.

Shoot the Moon
Theatrical Trailer (1:32) pimps the fact that Alan Parker directed Midnight Express and Fame. The movie is supposed to be honest and uncompromising as it shows what goes on during a divorce.