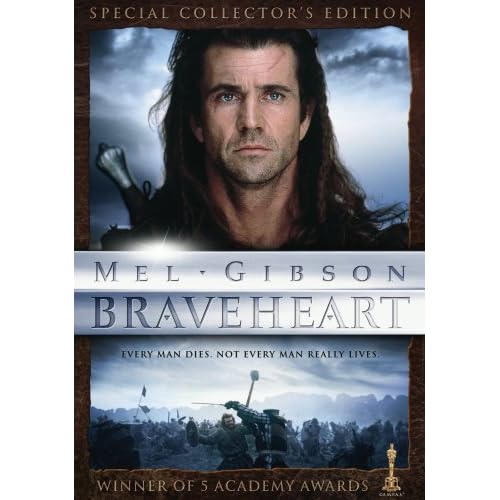 Before Mel Gibson became noted for being a bit crazy, he only played crazy. Gibson had a knack for playing characters a bit off-kilter, most notably as Martin Riggs in Lethal Weapon, but towards the downside of his peak he turned to directing. After 1993’s The Man Without a Face was released to mixed reviews, he would come back two years later with a modern masterpiece: Braveheart.

The film follows the story of Scottish hero William Wallace (Gibson), who led the Scots to independence from King Edward (Patrick McGoohan). While he never would see a Scotland free from British rule, Wallace would inspire the country to come together. And while it’s blatantly incorrect when it comes to the history, Braveheart is Gibson’s masterwork.

It starts with how Gibson tells the story. For a second-time director, as well as the star, Gibson’s view of Wallace is of an epic hero stripped of the mythos surrounding Wallace the man. Wallace is a man thrust into history and greatness against his choosing, but ultimately his choice is one he embraces fully. While the real Wallace would physically tower over Gibson, Gibson shows Wallace as a man upon whom greatness is thrust. As the film progresses from the revenge Wallace takes for the murder of his wife, through some of the battles that have become legendary for Scotsmen, Gibson’s Wallace would set the template for the modern epic hero. Maximus from Gladiator and Achilles from Troy, amongst others, have the same sort of aura that Gibson gives William Wallace.

And in many ways Braveheart set the tone for the epic film for generations to come. Every film in the genre inevitably gets compared it, but for good reason. Gibson the director has an exact sense of what he’s looking to do and has an exacting attention to detail. His action sequences are set up masterfully, as he refined his camerawork and story-telling style further in Passion of the Christ and Apocalypto, and he sets up the quiet moments with the same sort of care as well. While he has yet to top the sheer power of his sophomore effort, it was a sign that Gibson was much more than an A-list actor.

Braveheart is a film that if it followed history, it wouldn’t be nearly as good it turned out to be. While Gibson’s reputation may be permanently tarnished by his personal craziness, Braveheart remains a modern masterpiece and one of the best films of the last 25 years.

Presented in a Dolby Digital 5.1 format in a widescreen presentation, the audio/visual aspect of Braveheart has been improved upon since its first release on DVD. This is a film of wonderful cinematography and with a big, epic score, so the presentation has to be top notch. The DVD looks and sounds terrific, a small step up from the original single disc release, as everything looks and sounds like it should.

A Writer’s Journey follows Randall Wallace, the writer of the screenplay, for his inspiration to the film. It’s interesting to hear Wallace discuss the script, which was nominated for an Oscar but lost to The Usual Suspects, for quite some time. This isn’t a piece that glances over most aspects of it; Wallace is very direct and succinct in what he wanted the story to be and how it was one of hope.

Alba Gu Brath! The making of Braveheartis a retrospective on the film. Broken into three parts, it has the principles and Gibson in updated interviews discussing the film. Complete with interviews from the film’s release into theatres in 1995, as well as recent interviews, the piece runs around 50 minutes in total.

The first part, Resurrecting a Genre, focuses on the film’s production. Gibson initially only wanted to direct the film initially, then fell into being the star as well because he seemed to be the best fit for it as well. It’s interesting to hear Gibson talk about the art of directing, as he learned a lot from observing the great directors he’d worked with in the past and asking questions from them as well. Consulting with Clint Eastwood on the heels of Unforgiven, who told him to “don’t worry about it,” Gibson’s candor makes the piece really interesting to begin with. There’s also some archival footage of him helping to edit the film afterward, as well.

The Heat of Battle, the second part, focuses on the film’s battle sequences. With thousands of extras recruited from the military, mainly due to their ability to keep disciplined. Taking four hours plus daily to get into costume, get armaments and get into the proper formations on set, it’s definitely a large task and the filming itself took well over two months to shoot completely. Gibson planned the battles from a strategic standpoint, so that they’d make sense. Gibson studied classics from Kurosawa, et al, in order to stage them correctly.

The piece’s finale, Worth the Fight, focuses on the film’s final days. Gibson is fascinating to listen to as he discusses the film after its completion. Having lost a ton of weight during the film because of his multiple duties, the film took a toll on Gibson physically because of the sheer amount of work he put in on the film.

Tales of William Wallace/ is a look at the man Gibson portrayed. Wallace is a man whose legend often overtakes his actual life; the epic poem by Blind Harry blended a lot of reality with myth. The piece focuses on the actual historical truths behind the times. Most of what happens is not known, unfortunately, but there is plenty of information available about what did to form a cohesive historical narrative.

Archival interviews with the cast of Braveheart are included.

Both of the film’s Theatrical Trailers are included as well as a Photo Montage.