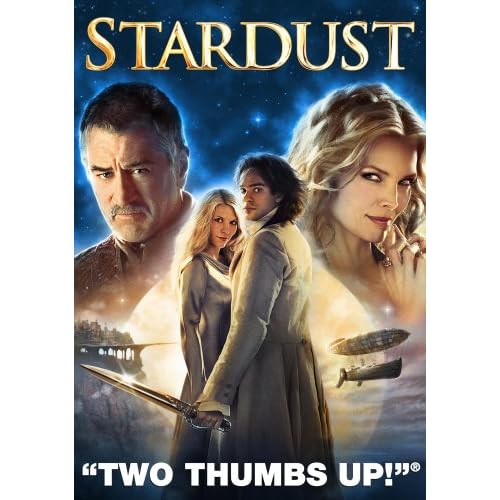 Tristan Thorn is a seemingly ordinary young man who lives in the seemingly ordinary English town of Wall. He works in the local shop and is smitten (as is every other boy in town) with the lovely Victoria. One night in an impulsive declaration of love, Tristan promises to bring back a falling star to prove his feelings for Victoria. This innocent, foolish statement leads Tristan through the gap in the long stone wall that separates the aptly named village from the magical, dangerous kingdom of Stormhold in the land of Faerie. There this seemingly ordinary boy will encounter fratricidal princes, powerful witches, sky pirates, and a star named Yvaine.

Many people compare this movie to The Princess Bride, and while I do not think it holds quite up to that rather high standard, this is a highly enjoyable film that definitely stays true to the spirit of that classic. It has the same sense of high adventure and magic, not to mention the tongue-in-cheek sense of humor and the idea that true love conquers all. This may be a personal bias on my part, but I do not think that any movie can capture the exact same feel of The Princess Bride, but Stardust comes very close.

There are a few Hollywood moments added in to spice up Gaiman and Vess’ fairy tale for the big screen, but despite those moments, the movie remains true to the heart of the story. Fans of the book will not be disappointed with this adaptation, with one possible exception: Robert DeNiro’s much-debated portrayal of Captain Shakespeare, the sky pirate.

DeNiro and the movie took a lot of flack because Captain Shakespeare was a closet cross-dresser, a characteristic not present in the book version. I knew about this controversy going in, and in some ways I think I was almost hyper aware, because I found myself over analyzing every scene with DeNiro, and while I cannot say that I enjoyed this change in the character, I also cannot say that it seriously hindered my enjoyment of the movie. I am actually curious as to how I would feel if I had not known this beforehand.

I have two problems with this choice, one–I do not particularly like seeing cross-dressing shown as comic relief, and in this movie a blatant comic relief character is not warranted, there is plenty of natural comedy already present; and two–it did not feel like a natural part of this character. It almost seems tacked-on, so as to make a two-dimensional character more interesting, and I think the writers could have found a better, more natural way of accomplishing that, such as emphasizing Captain Shakespeare’s fascination with England. There is great potential for dramatic irony there with a character from a realm of fantasy and magic being so entranced with what we think of as the mundane, boring, real world.

However, like I said, this portrayal did not affect my enjoyment of the movie, and Robert DeNiro is such a fine actor anyway that he can get away with it. In fact, you can even tell he had fun in the role, which is a feeling I think all of the actors shared. This is a fun movie; one that leaves you with a smile and a warm feeling, and sometimes that is all a movie needs to do.

Video
The movie was presented in widescreen 16:9 format. The picture was sharp and clear with no visible problems.

Audio
The audio tracks were recorded in Dolby Digital 5.1 Surround with English, French, and Spanish language tracks. The audio had good directionality, but there were times when the music or sound effects drowned out the dialogue.

Extra Features
Good Omens: The Making of Stardust (running time: 29:53)
A fun little documentary. The real treat, though, are the sections where Neil Gaiman is interviewed.

Deleted/Extended Scenes (running time: 5:30)
Nothing really special here; many of these you can see why the scene was deleted.

Blooper Reel (running time: 5:25)
Like most blooper reels this mainly consists of people laughing and forgetting their lines, but there are a few funny moments.