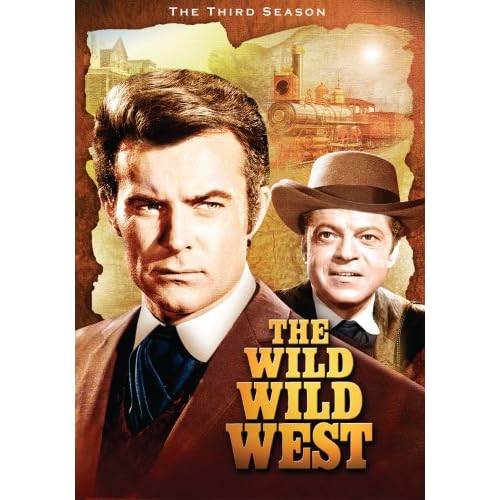 For a Sixties audience used to TV cowboys with their show downs, bar fights and cattle rustling, The Wild Wild West transformed the genre. Instead of outlaws and scheming land barons, Jim West and Artemis Gordon had to deal with diabolical madmen and potential presidential assassins. The Secret Service agents roamed the plains in a train with more gadgets than James Bond’s car. They tamed America’s frontier with more than z six-shooter. They had futuristic technology, suave charm and Jim West’s extra tight pants. They could keep our country safe.

The first two seasons had a healthy dose of camp elements sprinkled on situations and villains. The third season played down the humor to crank up the action. Perhaps the proliferation of camp in Adam West’s Batman and the rubber monsters on Voyage to the Bottom of the Sea made the guiding hands of The Wild Wild West steer their show towards realistic plots. That’s not to say that the show was completely devoid of humor between West and Gordon. This wasn’t as severe as the dark seasons of Miami Vice. West and Gordon didn’t quip to break the tension.

The lack of camp explains why arch-nemesis Dr. Loveless has only a single appearance. “The Night Dr. Loveless Died” opens with West and Gordon arriving at funeral parlor for the final rites on the diabolical diminutive genius. They can’t merely toss dirt on his coffin. They have solve clues to uncover his final plan. Actor Michael Dunn plays Loveless’ bearded relative. Dunn never disappointed when he was on the show.

“The Night of the Samurai” has a valuable sword being returned to Japanese diplomats. The hand over goes bad when the sword is stolen. West and Gordon have to give a Far West beatdown to the Far East bad guys to recover the blade. If they fail, US-Japan relations might sour. They might hold a grudge and bomb Pearl Harbor in 70 years! Khigh Dhiegh plays Baron Saigo. Fans of Hawaii Five-O know him as the evil Wo Fat. He was able to give his evil stare to Jack Lord and Robert Conrad. What a career. It’s not a real Western series until Harry Dean Stanton appears. He knots up the screen in “The Night of the Hangman.” “The Night of the Iron Fist” has West transporting a disgraced Bosnian Count out of the country. The Count has a hand made of iron and he doesn’t mind busting it on West’s noggin. Local outlaws are after the Count since it’s rumored he’s hidden $500,000 in America.

“The Night of the Legion of Death” shows the non-camp attitude of the season. West and Gordon discover a Territorial governor has plans on the White House. Instead of worrying about running against President Grant, the governor and his militia plan to assassinate their way into the job. “The Night of the Undead” mixes a little voodoo into the prairie. Gordon and West have to keep from being turned into zombies as they investigate a scientist’s disappearance.

This season could have gone for cheap laughs and devolved into Get Smart on horseback. They played it right by pushing the dramatic over the comedic. The villains gave West and Gordon a tough battle during the final fight. You could believe these people were evil and not comic book characters. Wild Wild West: The Third Season shows what happens when the espionage western cranked up the intensity. It was a season as tight as James West’s pants.

VIDEO:
The picture is 1.33:1. The transfer is sharp and colorful.

AUDIO:
The English soundtrack is Dolby Digital Mono. No subtitles, but the episodes are closed captioned.

The Inside Pulse
Season four will be released on March 18. 2008 so get to watching Season Three.