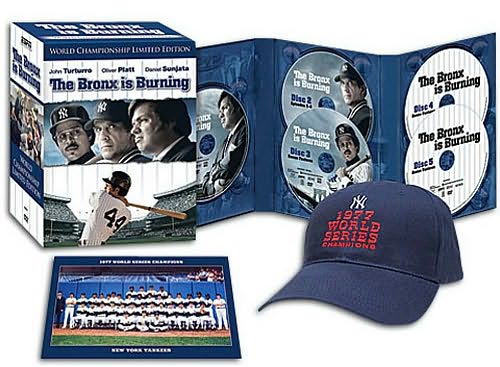 New York City in 1977 has become lionized as the last “you had to be there” moments in American history. The year featured the birth of Studio 54, the rise of the Son of Sam, the menace of the Black Out and the arrival of Reggie Jackson at Yankee Stadium. It was a busy year for the Big Apple. The Bronx Is Burning focuses on this crucible time through the context of the Yankees World Series run over the course of eight hour-long episodes.

The Yankees had gone nearly 15 seasons since winning the trophy in 1962. After losing to the Reds in the ’76 series, owner George Steinbrenner ruled that the missing piece of the team was free agent Reggie Jackson. He cracked open his wallet to buy the title for $3 million a season. This is a bargain compared to the nearly $25 million it cost for Roger Clemens in 2007. Manager Billy Martin was dead set against the swaggering swinger. Jackson had a key role in the Oakland dynasty that won three titles, but Martin viewed him as a locker room cancer. While Jackson wants to fit in with the team, his ego won’t let him be another guy in pinstripes. He gives an interview to Sport magazine that comes off as a slight against team captain Thurman Munson. He also has no problem talking back to Martin. They get nasty in a Fenway dugout when Martin benches him for not hustling.

Interwoven with the baseball tale is the cops hunting down the .44 caliber killer who would identify himself as the Son of Sam. This subplot doesn’t mix at the right level in the series. The story jolts as it goes from superstars at batting practice to regular people being gunned down on the street. There’s not a true character that bridges the events. The concurrent stories of the Son of Sam killings with Bronx Bombers’ season creates an unhealthy vibe that human sacrifice brought the World Series trophy back to New York City. When the cops catch the Son of Sam in episode five, the true crime story threads close. The final three episodes are completely focused on the Yankees. Thankfully, the producers didn’t go Hollywood by having Reggie Jackson race into the stands to stop the Son of Sam from killing Ed Koch during game-winning home run trot. But with a series that promises such a wide scope, you forget about the police angle as Reggie transforms into Mr. October. They could have easily focused on the team without the graphic killings.

Instead of just having a pack of actors fake the game action, they edit in the actual footage of the Yankee games of ‘77. This isn’t the first time a show mixed the dramatic with actual game footage. The original Brian’s Song was filled with Gale Sayers’ amazing runs. His football games were shot on 16mm so there’s a smoother transition to the recreated moments with the actors on the sidelines. The Yankees highlights of 1977 are from videotape. This downstep in quality shows in the mix. For this World Championship Limited Edition, a bonus DVD contains all the game highlights that were spliced into the drama. They used plenty of CGI and green screen to avoid costly location shooting and crowd wrangling. There’s a little Forrest Gump magic as Howard Cosell acts with Oliver Platt. This is Cosell’s best work since World’s Greatest Athlete. Cosell plays himself better than when Turturro donned the rug and mustard blazer in Monday Night Mayhem.

Turturro gives an excellent performance by portraying Billy Martin as doomed character. Even though he’s taken the Yankees to the World Series the season before, George won’t settle for another division title or AL pennant. Billy will be fired if they don’t win it all. His only relief comes in booze and extramarital affairs. Although to enjoy the performance, you’ll have to ignore the huge prosthetic ears that make him look like an evil elf. Platt is amazing as George. He nails the blowhard businessman. After Daniel Sunjata gets the hang of his Reggie hair, he brings the cocky nature to the camera. Nobody’s hair really fits their head. While they’re going for authentic ‘70s hairstyles, most of the cast look like they’re wearing roadkill pelts under their batting helmets.

For those who have the Yankeeography set, there’s a problem in the clubhouse antics: Where’s Sparky Lyle? Why doesn’t Sparky drop his pants and sit on a birthday cake? Were the producers fearful Sparky would sue them for not optioning his Bronx Zoo book if they used too much Sparky? That frosted butt moment really needed to be in the series.

The Bronx is Burning is frustrating series for a die-hard Boston Redsox fan. How can you not root for Reggie, George and Billy to go after each other with bats? Or beg for the Son of Sam to visit the stadium? But since this is based on history, we know the guys in pinstripes will overcome their dysfunctional mayhem to clinch the title. We know that Reggie will become a candy bar. The show does a little better job of summing up the era compared to Spike Lee’s Summer of Sam. The eight episodes hold your attention if you’re a fan of baseball and Jerry Springer. You’ll realize the price of victory in pinstripes was more than what George pulled out of his wallet.

VIDEO:
The picture is 1.78:1. The video image varies depending on the source material.

AUDIO:
The English soundtrack is Dolby Digital Surround 5.1. There’s a Spanish dub in Dolby Digital Stereo. The are no subtitles, but it is Close Captioned.

’77 Yankee Statistics is rolling text of the player’s numbers for the season.

Deleted and Extended Scenes (9:36) contains five moments that remained on the hard drive. Nothing too spectacular except three scenes deal with conversations between Billy Martin and Yogi Berra. Joe Grifasi’s performance of Yogi tackling the Rubik’s Cube should have been in the show. There’s a commentary track from Executive producer Gordon Greisman to explain why they had to snip away.

Outtakes (3:13) is the blooper reel. Most of the funny comes from Oliver Platt flubbing his lines.

The Bronx is Burning Webisodes (10:01) are seven short videos that are the players talking in scenes not from the show. The best is “What Would Jesus Hit?” with Yogi and Mickey Rivers talking religion. “Thank You For Making This Day Necessary” allows you to hear Yogi’s greatest sayings.

The Interviews (36:58) has talks with George Steinbrenner, Reggie Jackson, Billy Martin Jr. and John Turturro. George is in confessional mode as he discusses his mindset when he first bought the Yankees.

“On the Set” Documentary (22:27) gives us the story behind the production. You get to see the small ballpark that was transformed into Fenway Park, Dodger Stadium and Yankee Stadium

Stories of ’77 (12:52) contains two features on the brawl between Billy and Reggie during a Redsox game and Reggie’s infamous Sport magazine interview. You get to see the game footage of when Reggie and Billy went after each other in the dugout. Reggie does his best to explain what went down. Reggie and the reporter Robert Ward still have disagreements if Reggie claimed he’s the “straw that stirs the drink.” Reggie insists on calling him “Roger” Ward.

1977 World Series Highlights (1:37:27) contains clips from the original ABC broadcast of the games. Thrill to Howard Cosell and Keith Jackson in their yellow blazers. Listening to this duo call the game is so much more enjoyable than enduring Joe Buck and Tim McCarver.

Complete Game Six (1:58:40) gives us everything except the commercials. You can even hear the Yankee Stadium organist playing the theme to Star Wars. You’ll thrill to Reggie running from right field and into the dugout as he dodges Yankee fans storming the turf. This was one of the greatest running plays not on an NFL highlight film. During the post-game locker room celebration, keep your eyes peeled for a lurking cameo from the Boston Globe‘s Dan Shaughnessy.

The Bronx is Burning Anecdotes (38:46) has thirty-two short video segments that have various players, writers and front office personal elaborating on the stories in the series. Redsox fans might want to skip the Bucky Dent story.

Archival News Footage is three stories that get mentioned in the series. “Reggie Jackson Signs” (1:36) has Dick Schaap covering the day 44 came to the Big Apple. “Handshake Controversy” (2:54) mixes dramatic footage with a vintage Reggie interview about what went on in the dugout. “Thurman Munson Tragedy” (10:42) breaks down the plane crash that claimed the Yankee catcher’s life.

More Stories of ’77 has three short pieces about events covered in the series. “Mr October” (6:25) deals with the arrival of Reggie. Teammates talk about their relationship with him. “Son of Sam” (15:56) has Jimmy Breslin and the cops discuss the serial killer. “The Mayoral Race” (6:56) explains the rise of Ed Koch. “The Blackout” (6:12) deals with the night the lights went out on Manhattan. There’s plenty of footage of looting and burning.

Team Photo of the squad will look good on your rec room wall.

The Inside Pulse
What makes this boxset special is the actual game footage of the ’77 World Series. It’s good to be reminded of Howard Cosell’s work in the booth outside of a sound bite or two. If you’re a Yankee fan, you’ll enjoy the the series and the amazing bonus features.