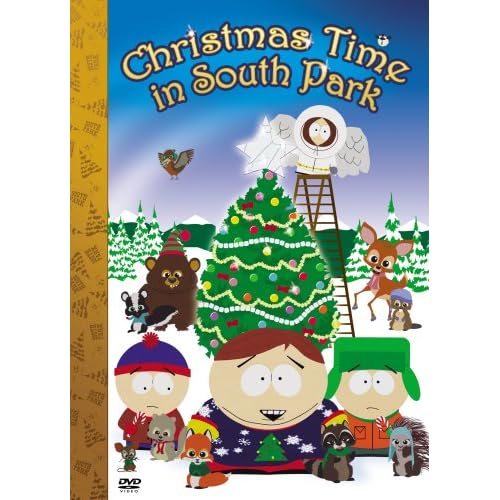 The Film
Christmas is usually a magical time for television. Special episodes, holiday cheer, magical stories, faith and joy all around. That’s what we usually get around from the special holiday episodes.
But South Park is anything but usual.

Granted, South Park isn’t the first show to have unorthodox holiday episodes. Married with Children did it a long time ago but the Bundies, when it came down to it, still loved each other. It’s the same with The Simpsons. But South Park is about anything but love. It’s about taking everything that society considers holy and festive and spitting all over it. So why should Christmas be any different?

The episodes featured on Christmas Time in South Park are:

” Mr. Hankey, the Christmas Poo” – Kyle, being the only Jew in school, doesn’t celebrate Christmas. While everyone else is getting excited about Santa’s visit, he’s looking forward to the annual appearance of Mr. Hankey, until he checks himself into an insane asylum.

“Mr. Hankey’s Christmas Classics” – This episode, a tribute to the voice actress Mary Kay Bergman, who committed suicide, features a Christmas musical hosted by the loveable Mr. Hankey. All the characters sing their own versions of classic Christmas songs.

“A Very Crappy Christmas” – Jesus and Santa make an appearance in the children’s Christmas special. They create this special in order to cheer up Mr Hankey, who was so depressed he didn’t even bother to show up for the holiday.

“Red Sleigh Down” – Cartman finds out he’s been too naughty over the past year and he won’t get any gifts. In an effort to gain some points, he decides to bring holiday cheer to the troops in Iraq, with help from Santa, Jesus and Mr. Hankey.

“It’s Christmas in Canada” – Christmas presents are more important than Kyle’s little Canadian brother. This is an important lesson we learn as the kids fly to Canada to get Ike back before the townspeople buy him back with the money intended for presents.

“Woodland Critter Christmas” – Stan, being the nice boy that he is, helps a clan of wood critters deliver their lord and savior, who turns out to be the anti-Christ, who later possesses Kyle’s body. Sounds like the perfect holiday story, if Cartman was writing one, doesn’t it?

The episodes aren’t equal. Some are funny; some are funnier (Like the last one). I never really got the point of themed episode collection (Friends are experts on this) when full seasons are out on DVD. Fans of the show would get the full seasons, and those who aren’t fans wouldn’t get even the themed collections. But still, if the studios release them, I guess they make at least some profit. If you’ve never been exposed to South Park and want to sample the show, this might be a nice start. But for anyone else? Don’t bother.

The DVD
This single disc release comes in a nice and strong digipack, designed like a Christmas card, which is a nice touch.

A/V Control
Featuring a direct transfer from the original TV presentation, the episodes look and sound just fine, as expected.

The Extras
Absolutely nothing. I don’t consider promos for other Comedy Central DVD releases as bonus features, sorry.