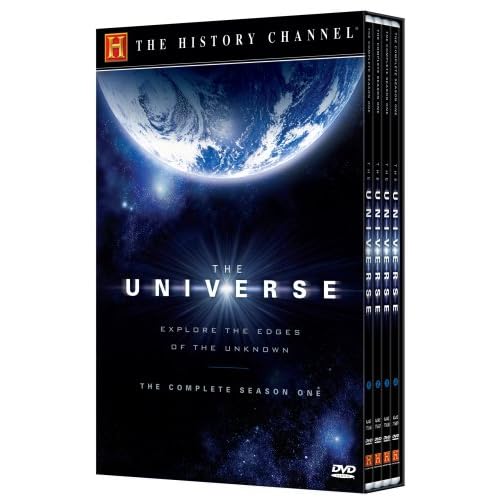 We all live on the planet Earth and surely take way too much for granted. Living in a city which is in a state or county or parish or country and we merely go about our lives everyday. Each year we get together with loved ones and discuss some of the places we haven’t yet been and could go visit on vacation. The Hawaiian islands? Paris, France? Perhaps a trip to South Africa for a traditional safari is in order? But what about those places that no-one has ever been to and that more then likely, you’ll never even get close to visiting? That’s right, our gigantic world is only a small speck in the huge universe that comes at us from all sides.

The History Channel has done it again as The Universe takes viewers deep into the farthest regions of space where the members of the Starship Enterprise could only dream of going. Jumping from planet to planet, and even going beyond where the stretches where even any knowledge is yet known. Each episode goes into the past and takes footage from old news reels and gradually brings us up to date on where research has gotten us as technology has grown more advanced. Take the episode entitled “The Moon” for instance. The moon landing is shown and it is quite hard to believe that event was almost forty years ago. It took decades to allow man to set foot on the moon and now a trip can be planned there by experts in a matter of hours.

In this series, you’ll begin to think that there is nothing you don’t already know that isn’t scientific mumbo-jumbo, but you’re wrong. You’ll also find yourself not only being concerned with the CGI presentations either. The information spewed forth by researchers and scientists is so incredibly mind stimulating that you’ll be more focused on each episode then any suspense-filled thriller ever. Each planet has its own little secrets that the general public just doesn’t know about. And with each mind numbing fact you learn, there will be another one quickly to follow.

Not only is each planet dissected one by one, but other facts of the vast universe are explored as well such as alien life forms. Without being able to actually yet land on the surfaces of other planets, cameras and robots have had to be our only connection to them. But a robot can’t see everything or compare to the immense intellect of a human being when it comes to checking out every crack and crevice. So hidden among the mountains and in the deep valleys could be plants, lakes, or even living and breathing beings. “Search For ET” really moves forward into what possible types of alien life could be not only in our own universe but those past it. We may not be alone and with technology always advancing; we may soon know for sure.

Secrets Of The Sun: Take a trip to the life-force of Earth through computer-generated images that make you feel as if you are somehow standing on the surface of the giant star. Follow along from the birth of the sun to the times of today and the harsh energy and storms happening everyday. Also witness what it would be like when the center of the universe would die and all light would cease to exist.

Mars: The Red Planet: With data collected from robots and satellites, this episode shows what it would be like it human life were able to inhabit the planet most similar to Earth. Considering my infatuation with the Red Planet, this is my favorite episode in season one.

The End Of The Earth: Deep Space Threats To Our Planet: Meteorites and asteroids have damaged Earth to the core for centuries and it looks to continue unless measures are taken to prevent it. Scientists are currently working on new methods to help protect the planet for many future generations.

Jupiter: The Giant Planet: Jupiter is bigger then every planet in the universe combined and yet so little is known about the giant. The cloudy atmosphere makes it hard to study it and its sixty moons yet scientists vow to find out more about the planet and the immense storms taking place on the surface.

The Moon: Being the closest celestial body to Earth and the only one that humans have ever set foot on, the Moon has a long history and this episode shows how it formed and how it influences Earth today.

Spaceship Earth: Even though we spend every single day of our lives aboard our giant spaceship, there is still so much we don’t know about it. Learn how it formed and the forces that threaten to destroy it daily.

The Inner Planets: Mercury & Venus: Learn about the formation of the two small planets between Earth and the Sun. We may have never been to them, but their rocky formations show the promise of so much to learn.

Saturn: Lord Of The Rings: It may be best known for its gigantic rings, but there is so much more that makes Saturn so gorgeous. The farthest planet away that is still visible to the naked eye, scientists get as close as possible to learn more about its unusual system of rings and moons that make it so unique. This is another favorite episode of mine as learning about Saturn is just phenomenal because it is just so odd and possibly the most easily identifiable planet.

Alien Galaxies: There are over one hundred billion galaxies in creation and not even one percent of them has been studied. Learn about the possibility of other life forms, planets, stars and so much more that could be surrounding us this very moment.

Life And Death Of A Star: From a distance they can seem so peaceful and docile as they hover above and light up our sky at night. But in reality the life of star from birth to death can be quite adventurous and violent. Witness great events as stars burning out their light and fantastic supernova explosions in another great episode.

The Outer Planets: Jupiter, Saturn, and Uranus are the planets on the edge of our Solar System but there is much more beyond them yet unexplored. Witness the creation of these gaseous planets and the possibility of finding out what lies past them so far from our centering Sun. Also learn what alien life may look like if it were to be able to exist on the outer worlds.

The Most Dangerous Place In The Universe: The Universe holds so many things inside of it that are not known to the uneducated and can’t be seen with the naked eye. Yet up above are dangerous black holes, star explosions, gamma ray bursts, and so much more that would be fatal if they were to happen within the atmosphere of Earth.

Search For ET: Without being able to actually step foot upon other planets; it is not truly known if the human race is alone in our Universe as the only existing life forms. Join along on man’s quest to find out information about not only the planets themselves, but to find out if we are truly alone.

Beyond The Big Bang: Scientists today no longer argue over whether the “Big Bang” actually happened to create our universe. It is now taken as a given fact but they are still trying to convince the rest of the world. For years and years scientists have done experiments, taken calculations, and examined figures that have allowed them to create what it may have looked like so long ago when our existence began.

The episodes are shown in 1.78:1 Anamorphic Widescreen format and look fantastic. Some of the most breathtaking images are shown in this set and you simply must sit back and take it all in for they are most likely things you’ll never see any better then this.

The episodes are heard in Dolby Digital 2.0 Stereo Sound and does the job here. There is not much to be heard except for the narrator who comes through perfectly clear and at the forefront at all times. Every now and then you’ll hear an occasional sunburst or something else, but nothing that will ever overpower the narration.

There is really good reason as to why there are no special features included on this collection. What more could you want? The entire series itself is a gigantic special feature and main event all rolled into one. Any interviews, behind the scenes featurettes, or explanations as to why something was or wasn’t included is laid out for you in every episode. The History Channel has done a fantastic job with this series so far and I am ecstatically looking forward to the next season. Most of the time these types of specials are put into some type of limited event or miniseries (See Planet Earth), and after a few episodes, they’re done. With The Universe, there is countless information that can be included in season after season and it shows for the amount you will learn from just this set is not even the beginning of what is to come. I implore you to pick up a copy of this immediately because it is something that your entire family can enjoy and get smarter from all at the same time.