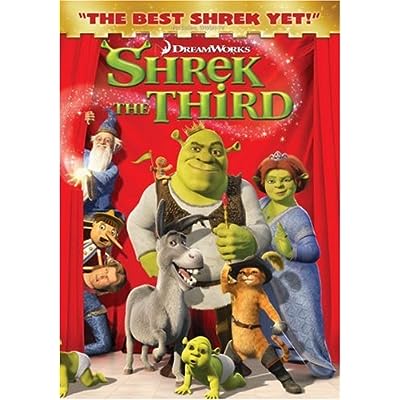 It’s the circle of life. You go through the early stages of your life figuring out who you are and eventually accepting who you are. That’s when you are able to find the love of your life and settle down. Now it’s time to meet the in-laws and attempt to be accepted by them. Then, just when you think you are content with your life you start doubting yourself again. Some call it a mid-life crisis. Often times it revolves around words “I’m pregnant!” Your life is going to change one way or another.

That same lifespan can be applied to the life of Shrek and the Shrek trilogy of movies. In the original Shrek, Shrek was just a big, green ogre who didn’t like who he was. He always felt like an outsider. That is until he found out that everyone felt just like him. He found the love of his life in Fiona, who was not quite the perfect princess that she seemed. In Shrek 2, Shrek developed a great relationship with Fiona’s parents, who just happen to be King and Queen of Far Far Away. All is going great in their lives. So, of course, it must be time for a crisis of some sorts for Shrek.

In Shrek the Third, Fiona’s father and King of Far Far Away, King Harold (John Cleese), passes away. As a result the clumsy Shrek (Mike Myers) becomes the immediate successor of the throne. However, Shrek doesn’t want to be king. He just wants to live in the swamp and be a big, green ogre. So Shrek decides to find the legitimate heir to the throne in the form of Fiona’s cousin, Artie (Justin Timberlake). Along with his friends Donkey (Eddie Murphy) and Puss in Boots (Antonio Banderas), Shrek is off to another distant kingdom. But before that journey begins, Fiona (Cameron Diaz) informs Shrek that she is pregnant. Fiona has her own battle to fight back at home, though. Fiona, her mother Queen Lillian (Julie Andrews), and Fiona’s “Royal Society of Fairytale Women” have to fight off the envious and ambitious Prince Charming (Rupert Everett), who has gathered his own army consisting of fairytale villains. They plot a coup d’état to make Prince Charming the new king.

The plot of this film doesn’t stray too far from the winning formula that was used in the previous films. These films have always been funny for kids to laugh at on the surface, but still smart enough that their parents will be able to get some of the jokes that are over their kids’ heads. For the most part that is still true for Shrek the Third. However, this movie seems more aimed at parents than kids. Shrek is basically having a mid-life crisis. That’s something that kids probably can’t relate to. There is still enough crude humor for kids to enjoy, but most of the jokes here will fly over their heads.

The first two Shrek movies have always stood for mocking the traditional fairy tale. It was satire towards all the Disney fairytale clichés. The point of these movies weren’t necessarily about having a message. It was about being entertaining and humorous to all ages on many different levels. However, Shrek the Third does have a underlying message throughout. That message is to “be yourself and not worry about what other people think of you”. While having a message is certainly not a bad thing, it’s just not needed for a Shrek film. Especially since the message often gets in the way of the comedy and satire in this film.

Another thing that people might not like about this film is the fact that the core cast of characters (Shrek, Fiona, Donkey, and Puss in Boots) is featured less than in the previous two movies. So many secondary characters get a lot of screen time here. Whether that is good or bad depends solely on which characters you like the most. Having all of these characters featured is not necessarily a bad thing, but two of the funniest characters, Donkey and Puss, are given less material to work with here. That is definitely a bad thing.

There are plenty of positives for Shrek the Third. First and foremost are the visual effects. The animation has definitely improved since the first movie. There has been significant advancements in making the characters more real and life-like. The faces of the characters show more expression and every movement is more graceful than ever. It’s like Shrek is in “high-definition” without it having to be in high-definition. Secondarily, the voice work is top notch once again. The two main additions to the cast are Justin Timberlake as Artie and Eric Idle as Merlin. They actually fit in quite nicely with the existing cast as do the “Royal Society of Fairytale Women”: Sleeping Beauty (Cheri Oteri), Snow White (Amy Poehler), Rapunzel (Maya Rudolph), and Cinderella (Amy Sedaris). The Gingerbread Man (Conrad Vernon) continues to steal scenes, though, as this character is highly underrated.

Shrek The Third is no doubt the best looking Shrek movie in the trilogy so far. The voice work is nothing but quality as well. But perhaps Shrek the Third was doomed from the start. The unwritten rule of the trilogy is that the first movie is excellent, the second movie is not as good but still great, and the third movie is only average since it’s all about making money. That is probably the best way to sum up the Shrek so far. While Shrek 2 was actually a slight improvement over the original Shrek, Shrek the Thirdfalls right into the “trilogy trap”. This film is definitely entertaining and something that people of all ages can laugh at and enjoy. It just doesn’t live up to the hype. Shrek’s “mid-life crisis” ironically corresponds with the “mid-life crisis” of the Shrek series of movies.

The video is given in 1.78:1 anamorphic widescreen color, which is enhanced for 16:9 TVs. The video is really top-notch quality here. There are no major or minor issues here. The animation has also improved in this film, so you really couldn’t ask for much more here.

Worcestershire Academy Yearbook
This feature is quite involving. Basically, it is Artie’s virtual yearbook for his school, Worcestershire Academy. You open the pages and get various information on Artie, the principal, and various groups of kids in his school including the “Cheerleaders”, the “Spell Spinners”, the “Fair Maidens”, the “Mascots”, the “Hacking Ye Ole Sack Club”, the “Jousting Team”, the “Marching Band”, and the “Chess Club”. For each character you get to listen to them state their “Clubs/Interests”, “Dedication”, “Bequeath”, “Greatest Desire”, and “Quote”. In all, there are 30 entries for each student or faculty in the school.

Big Green Goofs
You would probably call this the “Bloopers” section of the movie. However, since this is an animated movies you can’t really have “bloopers” by accident. These really have to be created by the animators. This runs for two minutes and it’s fairly interesting to see some of the “early animation”, but not really as funny as most “bloopers” are.

Lost Scenes
There are three deleted scenes here. However, these scenes are definitely more intriguing than other deleted scenes found in every other movie out there. The reason for that is all three scenes never made it into the movie. They still had to be “pitched” to make it in the movie, though, and we see that entire process for each of these scenes. The human interaction with each person “acting out” each scene from one storyboard to the next is quite funny. All together this runs 18 minutes.

“Donkey Dance” Featurette
Basically, Donkey dances for 30 seconds here. A little too short to be worth anything. But at least you can now do the “donkey dance”.

“Meet the Cast” Featurette
This featurette runs for 10 minutes and it’s basically what it says. We talk to the main members of the cast about this movie and their respective characters.

“Shrek’s Guide To Parenthood” Featurette
Four different characters, Donkey, Puss In Boots, Pinocchio, and Gingy, give you their parenting tips for Shrek and Fiona. There are five tips from each character and they run 30 seconds each.

“The Tech of Shrek” Featurette
This featurette runs for 10 minutes and if you want to learn more about the the technology behind making this movie, here is the featurette for you. Crew members talk about they have improved on the technology used to make this movie from the previous two movies. This is very interesting.

DreamWorks Animation Video Jukebox
Basically, here is where you can listen to samples of the soundtrack for each of these DreamWorks animated movies: Shrek, Shrek 2, Shark Tale, Madagascar, Over The Hedge, and Flushed Away. They feature one song from each of the movies here. These are all songs you have heard before, if you are an adult, but of course you get the animated scenes set to the music here. It’s essentially an advertisement for each of these movies.

DreamWorks Kids Features
There is a whole section of special features that is aimed towards kids. There is “Merlin’s Magic Crystal Ball”, which is just what it says. You give a “yes or no” question and Merlins tells you the answer to your question. There is also a “How To Be Green” feature, which is basically a four minute PSA telling kids to “be green” as in “reduce, recycle, reuse!” Finally, there is an expanded “Learn the Donkey Dance” feature. It gives you instructions on how you can do the “Donkey Dance”. I’m not sure if “shaking your behind” is quite appropriate for kids to be learning.

DVD-ROM Shrektivities
You can access extra special features using your computer and playing this DVD using your DVD-ROM. Extra features including “Shrek Shmash Ups (Make your own video) and “Royal Tournament Games” among others.

This DVD is LOADED with special features. If you haven’t seen this movie yet, you should definitely rent it. Fans of the series probably won’t be that disappointed with it and will still probably end up buying it. I just can’t recommend buying this one as much as the first two films. It’s still good, but it’s not as great as the other two.