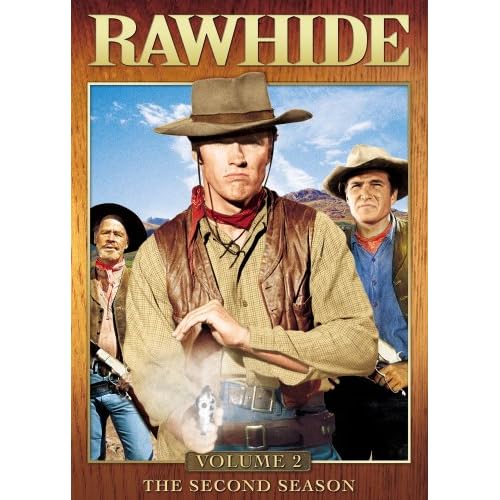 There’s two reasons why Rawhide has remained active in popular culture: Clint Eastwood and a catchy theme song. Although for modern audiences Clint is an Oscar winning director and not merely a drover herding cattle. The theme song gets more TV exposure from John Belushi and Dan Aykroyd cracking the whip in The Blues Brothers. While these are the two most memorable elements of Rawhide, the show has much more to offer in action and stories. New fans of TV Westerns need to return to the source to fully appreciate a youthful Clint and the impact of the song.

The second half of the second season of keeps up the quality. There’s plenty of great vistas surrounding the actors. This isn’t just cowpokes on a studio backlot. The location work alone on the show makes it more realistic than a majority of theatrical Westerns from this era. “Incident at Tinker’s Dam” is very theatrical as we discover Wishbone, the team’s cook, really does have a twin brother. The twin is more trouble than Wishbone’s chili and beans. He’s got a tribe of Indians wanting his head, but he doesn’t care. The crew has to stage a funeral to appease the Indians before they all get scalped.

The best part of a vintage show is catching future TV superstars in guest roles. You never know who will cross paths with the cattle drive. “Incident of the Dust Flower” has Francis Bavier far from Mayberry. It’s weird seeing Aunt Bea from The Andy Griffith Show in the frontier. “Incident of the Stargazer” has Buddy Ebsen looking like a bad ass in a tight leather jacket. Who knew Jed Clampett could pull off being cut throat as a henchman? A woman gets a lift from Pete Nolan to her husband’s house in the wilderness. When she arrives, she swears a hired hand has assumed her husband’s identity. Her “husband” insists his wife suffers from mental breakdowns and can’t properly remember him. Buddy is in on the plan, but he’s not quite as loyal as his bossman believes.

“Incident of the Dancing Death” has Warren Oates (The Wild Bunch) oozing gypsy blood. It’s great to see Oates facing off with the young Clint Eastwood. It’s like the universes of Sam Peckinpah and Sergio Leone clashing in their stares. There’s also a hot gypsy girl flirting with Clint. “Incident of the Arana Sacar” lets us see a youthful Cloris Leachman before she headed for Minnesota and The Mary Tyler Moore Show. This is a great episode as the boys are lured to a trading post for booze, but end up having their entire herd hijacked. How can you not know where your herd has gone since they trail of cow patties must be obvious on the range?

Rawhide: The Second Season, Volume 2 provides another sixteen adventurous yarns from the trail. If you’re a mild fan of TV Westerns, this is a show that can suck you in with the images, cast and story. You get to enjoy the early years of Clint Eastwood before he road off to Europe to become a superstar. Rawhide is more than a song and $800 Jeopardy answer for the Clint Eastwood category.

VIDEO:
The picture is 1.33:1 full frame. The transfers are clean even after filming all day amongst cattle on the dusty trail.

AUDIO:
The soundtrack is Dolby Digital Mono. It has closed captioning.