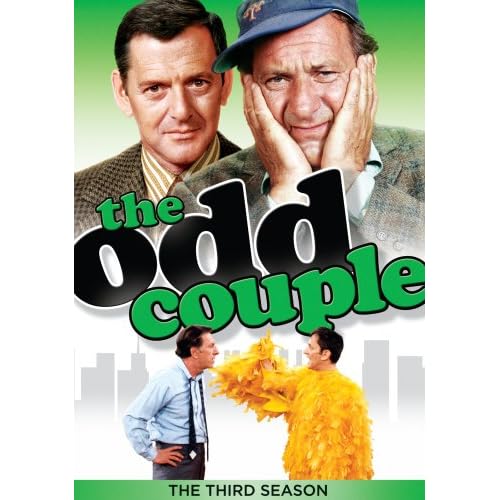 Oscar Madison is the uber-male. He lives a charmed life. He’s got a huge Manhattan apartment. He covers sports for a living. He drinks beer for breakfast if the mood strikes him. He orders pizza with scrambled eggs. His room is a complete mess. He lives the ultimate dream. Of course there’s people who can’t accept his perfection starting with Felix Unger, his roommate. Why must he keep cleaning up the ideal bachelor? Probably to make sure something happens each episode besides Oscar napping on his sofa using a potato chip bag as a pillow. It’s the conflict between a man who lives a perfect life with a roommate that thinks he’s a perfectionist that makes The Odd Couple a great sitcom.

Many sitcoms get smug during their third season. The actors pause as they enter the set in order to bask in the studio audience’s applause. The scripts pace themselves since the producers know they’re now guaranteed a five season run and eternity in syndication. The third season of The Odd Couple avoids this cocky attitude. Historically the show was never a ratings winner. It had been canceled at the end of each season. The network would revive the series after ratings boosts during the summer reruns. Perhaps this kept Jack Klugman and Tony Randall focused on their characters instead of turning into preening TV superstars.

There were plenty of relationship changes in season three. Without any explanation, the romance between Oscar and Dr. Nancy Cunningham ended. She disappeared into the Garry Marshall void that claimed Chuck Cunningham on Happy Days. Nancy did make Felix a bit of a third wheel as she tried to domestic Oscar. There was only room for one Odd Couple on the show so Oscar is once more a swingin’ single. Felix “dates” Miriam (played by Elinor Donahue, also known as Betty on Father Knows Best and Ellie Walker on The Andy Griffith Show). Unlike the doctor, Miriam isn’t a serious romantic interest. In no way does she interfer with Felix love for his Gloria, his ex-wife. Penny Marshall’s screen time is upped in her role as Oscar’s assistant. She’s constantly dropping by the apartment to pick up his latest columns for the newspaper. The normal Poker night regulars cut back their appearance, but we get plenty of visits from Murray the Cop.

“Gloria, Hallelujah” has Oscar lie on his computer dating application. His punishment? He ends up matched with Felix’s ex-wife. His roommate isn’t happy with the cyber-matchmaker, but can he really argue with science? “Big Mouth” lets legendary ABC sportscaster Howard Cosell feud with Oscar. It’s amazing how natural Cosell was at playing himself on the small screen. He’s fearless when he mouths off with Klugman. As annoying as Cosell seemed back in the ‘70s, he’s a lot better than the network booth dorks we suffer through in the 21st Century.

There’s two gameshow themed episodes this season. “Password” has Oscar being invited to appear as a celebrity guest on the show. Felix begs Oscar to make him his partner. But can he really outplay Betty White? “Let’s Make A Deal” brings Monty Hall to Oscar’s Poker game. Turns out Oscar and Monty are college pals. Oscar and Felix sneak into a taping of Let’s Make A Deal for a shot at the big prize. They have to hide their identity since it’s illegal for them to win since they’re pals with Monty.

For people who got confused when they switched Darrens on Bewitched, brace yourself. They swapped actresses on Felix’s daughter. Instead of Pamelyn Ferdin, “The Odd Father” features Doney Oatman as Edna Unger. Felix gets jealous when he realizes his offspring prefers spending time with Uncle Oscar to his outings. There’s a great comic routine involving Felix’s latest portrait subjects. “The Odd Couples” has Oscar’s mother visiting the apartment. There’s only one kink in her arrival, she doesn’t know he’s divorced his wife. He doesn’t have the heart to tell the truth so he has Blanche (played by the recently departed Brett Somers) move back into his bedroom. How long can he fake being a married man?

Jack Klugman’s birthday should be a national holiday and “Oscar’s Birthday” should be shown on that day. The episode has Hal Smith, beloved by children across the globe as Otis Campbell on The Andy Griffith Show. Did he and Elinor break out a jug of moonshine to remember their time in Mayberry? Felix gets called in by the IRS on “The Ides of April.” Felix is furious that he’s getting audited since Oscar is the one who does he taxes on bar napkins and keeps “receipts” that consist of signed footballs.

“The Princess” lets Oscar fall hard for royalty played by Jean Simmons (Elmer Gantry & Spartacus). Fans of McHale’s Navy will get a thrill seeing Billy Sands as a tailor. Felix is disturbed when the Princess becomes smitten with his uncouth roomie. Pro football royalty also shares time with Felix and Oscar. Deacon Jones is lured into making a shaving advertisement with Felix as the director on “Felix’s First Commercial.” He’ll only do it under the condition that Oscar appears in the ad with him. The sponsors aren’t happy, but they’re desperate to get the superstar pitching their product. “Take My Furniture, Please” has Felix revamp the apartment to reflect the modern world of interior design. Oscar is not pleased with the hand chairs. Bubba Smith (Police Academy) makes a short appearance. Also popping up in the episode is Charles Lane, the venerable character actor.

There’s the warning that some episodes have been edited or had music replaced. The most noticeable moment is on “I Gotta Be Me.” The original version ends with Felix singing the opening lines from “Cocktails for Two” and Oscar locking him in the coat closet. On the DVD, the scene freezes before Felix opens his mouth and the credits roll. It’s so frustrating when music publishers hardball TV shows for a minor quoting of their songs. Thanks to the music publisher, we get screwed out a great ending. Some may protest by boycotting this DVD release, but what’s the other choice? Catch the syndication print on TV when the 25 minute DVD version is sliced down to 22 minutes?

The Odd Couple: The Third Season is roommate chemistry at its peak. Randall and Klugman are still absorbed in their characters and know how to get under each others’ skin. It’s like watching a great tennis match as they lob frustrations at each other. Neither one will back down from their vision of the perfect life. How can you not be jealous of Oscar’s life? He gets to live the life of a complete slob yet has a roommate who cleans and cooks. This show is bliss.

VIDEO:
The picture is 1.33:1. The color transfers are sharp enough for you to make out the junk beneath Oscar’s bed.

The Inside Pulse
The Odd Couple is one of the most underrated sitcoms. Unlike some shows that lose their charm as they age, Klugman and Randall’s performances still shine. Hopefully the final two seasons will be released before the end of 2008. It’s a shame this series doesn’t get better attention in syndication.