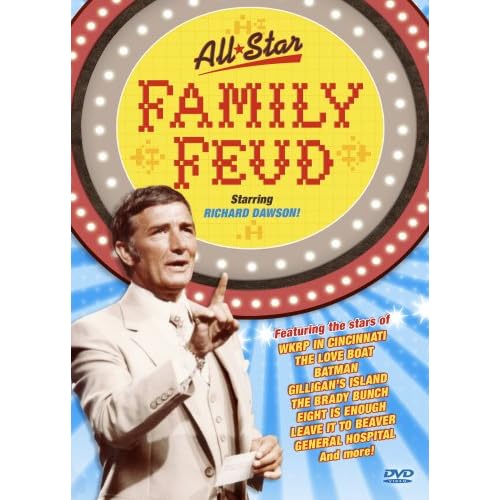 Why would you want to own a game show on DVD? What’s the point of watching it a second time when you know the answers and the winners? There’s always a chance you can hustle an elderly uncle who thinks you’re watching live TV, but then what? There are exceptions. Match Game and You Bet Your Life with Groucho Marx are great on DVD because the questions are secondary to the hosts and celebrity panelists cutting it up. Vintage Family Feud episodes are funny with the cutting edge fashions of 1977 as worn by families from South Dakota. Is that enough? Luckily this boxset does not contain ordinary episodes. These are showbiz “families” clashing. Instead of merely smooching housewives from Burbank, Richard Dawson is laying the lip smack on actresses and Lumpy Rutherford’s dad.

While there’s been plenty of celebrity game show specials, what makes Family Feud unique is the interaction of famous casts without them remaining in character. Does Gavin MacLeod command his Love Boat crew when he isn’t wearing his captain’s hat? Does Fred Barry act like Rerun off the set? Family Feud was the perfect place for casts of famous shows to tangle. Battle of the Network Stars injured the actors on the dangerous obstacle course. Celebrity Jeopardy makes stars look like a turnips as they hold a buzzer and remain silent. Celebrity Boxing is just pathetic. Family Feud was safe and not too tough for even the dumbest of sitcom actors. They might sound foolish, but they don’t look stupid. Everybody gets a turn trying to figure out how 100 people would answer a simple question. Who wouldn’t have a guess about what guests do at a wedding?

There’s two types of All-Star Specials within this box set. The daytime version is the regular thirty minute show (that runs about 22 minutes). The various stars played each other all week. These shows were cast with a nostalgia factor. Why else would they have the cast of Your Hit Parade battling with Leave It to Beaver? Although any excuse to bring Richard Deacon to masses is a reason to rejoice. The second version is prime time All Star Specials. These hour long episodes featured network stars of hit shows from ’78 to ‘83. There’s a great grudge match feel as Eight is Enough battles Family. Which show about families will reign supreme in the polyester era? Even with weird ‘70s hair, the ladies of Eight is Enough are hot.

Richard Dawson is at his prime in these specials. He busts out his W.C. Fields impersonation. He mentions his previous screen work with various actors. Dawson can’t get enough of kissing the ladies, but he pays proper respect to Richard Deacon by giving Lumpy’s dad a kiss on the cheek instead of a manly handshake. They wickedly expose their history while sharing a beret.

All-Star Family Feud is a feast for TV fanatics. There are so many familiar faces volunteering answers. It’s bliss to see Peter Lupus and Greg Morris reunited after their Mission: Impossible days. There’s a major head scratcher with the first Dukes of Hazzard episode. Do you remember Jeff Altman (Pink Lady and Jeff) being a cast member? Talk about a $2,000 question for Jeopardy. It’s nice that the supporting actors were given the spotlight, but imagine the disappointment in a child’s eyes when instead of Bo and Luke, it’s Jeb Stuart Duke. Luckily the real stars appear later on the disc for their fierce contest with The Waltons. Contrary to rumor, the supporting players didn’t announce their charity as Coy and Vance. If you’re a pop culture junky you’ll be fiending all over All-Star Family Feud.

VIDEO:
The picture is 1.33:1. The video transfers have sporadic glitches and tracking problems. This is the price you’ll have to pay to see Fred “Rerun” Barry in action. Why weren’t these shows shot in 70mm?

EXTRAS:
Photo Gallery has 32 advertisements and production photos dealing with the specials.

The Inside Pulse
Mr. Burns will be more than pleased with this All-Star Family Feud since it features Rory Calhoun. This is a boxset that will be beloved by TV junkies.