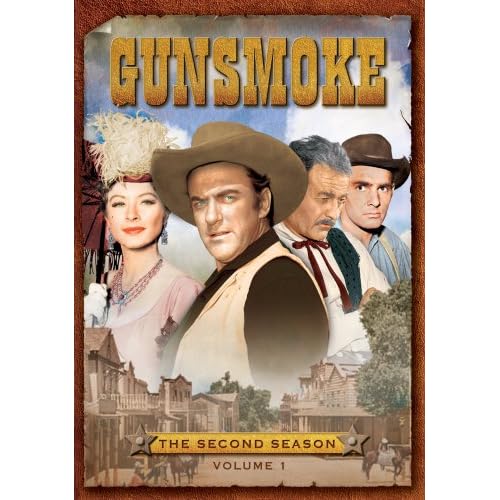 Sheriff Matt Dillon might not have tamed the entire West, but he certainly knew how to clean up Dodge City. The second season of Gunsmoke has a young Sheriff Dillon able to rectify and restore peace in the town in less than 30 minutes. What makes Gunsmoke special is that it’s not merely about law enforcement. We also get a firm dose of frontier medicine as Doc Adams heals the cowpokes. There’s civil debauchery bought at Miss Kittyï¿½s bar and unadvertised brothel. Gunsmoke: The Second Season, Volume 1 illustrates the fabric of a town through a patchwork of booze, bullets and bandages.

“Cow Doctor” has a local rancher decide that he can’t trust Doc to mend humans. He only calls for the medical professional to work on his livestock. In a normal show, this would be a comic set up. But in Gunsmoke, this foolish belief has tragic results. “Custer” deals with an army deserter hiding out in Dodge City. There’s a Twilight Zone twist when the deserter gets his punishment. Matt investigates a murder in “Spring Term.” He realizes that the motivation for the homicide was mistaken identity. The bullet was meant for him. “No Indians” is an intense episode as Matt and Chester have to discover if recent killings have really been the work of the Pawnees. There’s an action packed shoot out when Matt reveals the truth. Matt and Chester discover a hurt buffalo hunter stranded in freezing temperatures in “Pucket’s New Year.” The hunter wants to heal up so he can get revenge on his business partner that stranded him. The episode features the ubiquitous Richard Deacon as the president of Dodge City’s bank. “The Mistake” lets Sheriff Dillon mix it up with Mike Connors (Mannix). Connors is accused of killing one of Miss Kitty’s dealers.

“Legal Revenge” has Doc suspecting a wife (Cloris Leachman from Young Frankenstein) of knifing her husband. The husband claims it was a wood chopping injury. Doc wants to take him to town, but the wife won’t let him leave his sick bed. Doc sends Matt to investigate. He discovers the truth of the married couple’s relationship. Chester discovers the joy of Limburger cheese to the obvious nausea of Doc and Matt. “Sins of the Father” features Angie Dickinson (Police Woman) playing an Arapaho Indian married to a mountain man. The owner of the Dodge City hotel isn’t happy that they checked into his joint. He wants Sheriff Dillon to evict them, but not because they’re a mixed couple. He’s got an issue with her father’s last visit to the town.

There’s a screw up on the first disc. “How to Cure a Friend” is “How to Kill a Friend” from the fourth season. There’s been no news from Paramount about how they will remedy this issue. Odds are they’ll just include “How to Cure a Friend” in Volume 2 and you can consider this a preview of The Fourth Season boxset. Both episodes deal with crooked card playing. But how could the folks at quality control miss the fact that the great Simon Oakwood (Kolchak: The Night Stalker) was a guest star in “How to Cure a Friend?” “How to Kill a Friend” has two gamblers attempt to cut Sheriff Dillon a share of their action for protection. The Sheriff doesn’t play their game.

The sophomore outing of Gunsmoke shows the TV series moving away from its radio roots. Unlike the first season, you can’t close your eyes and know exactly what’s going on. The visual aspect takes a stronger role in the storytelling. Everything isn’t completely told to us. Dodge City was taking form and would remain on the television map for another 18 and a half seasons. Do wish they hadn’t split up the season. That means another 37 boxsets on the horizon to get the complete story of Matt, Doc and Miss Kitty.

The DVD
VIDEO:
The picture is 1.33:1 full frame. The black and white transfers are clean.

EXTRAS:
Sponsor Spots (2:44) features cast promotions for L & M cigarettes. It’s great to see James Arness lighting up after a busy day playing cowboy. “Light up, free up,” Arness informs us. “Get the most out of life. Live modern. Smoke L&M.” Did you know they had a miracle tip? Don’t smoke, kids. Although Miss Kitty looks hot sharing a lighter with him. There’s an electric shaver ad for non-smokers.