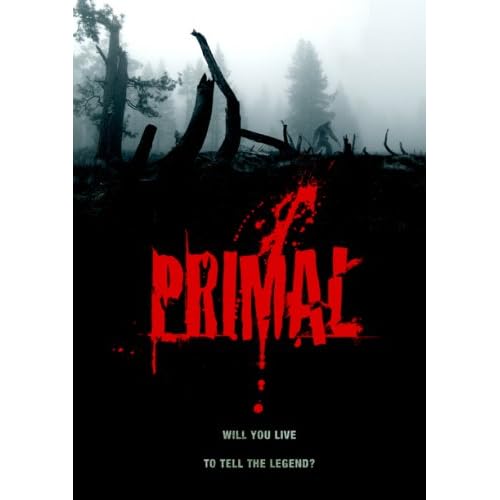 Sometimes a film is so bad, so god awful that it literally sucks your life force as you watch it. You were having a good day, you were in a good mood, you decided to sit down and watch an entertaining film, cause, you know, that’s why you watch films, to be entertained. Anyway, you pop in the DVD, you sit down with some popcorn and a soda, you hit play and instantly your good mood is gone. Your popcorn somehow tastes bland and your soda has lost all it’s fizz. A smarter person would turn that film off right away and watch something good. I didn’t have that option. I had to watch the whole film so I could review it for you.

So what is Primal? Primal is a VERY low budget (imdb.com says $10,000) direct to DVD flick about a bunch of bad actors wandering around the woods in Southern California while another bad actor in an over priced Halloween costume slaughters them and a really bad cameraman records it all.

I pretty sure this film was shot on a camcorder purchased at Wal-Mart. It’s not even widescreen. It’s very easy to pop on some black bars in Final Cut. The dialog is atrocious, the plot is non-existent, the artistic choices are baffling, and there are far too many characters, none of which you care about and their stories get all convoluted. All the death scenes are shot super shaky came so much that they make Blare Witch look steady. And while these death scenes only last a couple seconds each one gives you a little bit of a headache.

As I stated above the point of movies is to entertain. This film offers nothing to entertain. It’s not even so bad it’s good; it’s just bad, bad, bad. It is only 80 minutes so that’s a plus. I don’t know why anyone would think this was a good idea, how they could convince others that it is a good idea or how they could raise the money to film it and convince Lionsgate to release it. I just don’t know.

This film is presented in 1.33:1 fullscreen. Sound is in Dolby Digital 2.0. English and Spanish subtitles available. This film looks terrible, it’s poorly shot and poorly edited.

The Inside Pulse
Wow, I’ve reviewed some bad films in my time, but I think this one takes the cake. I couldn’t think of one nice thing to say about this film if you paid me.