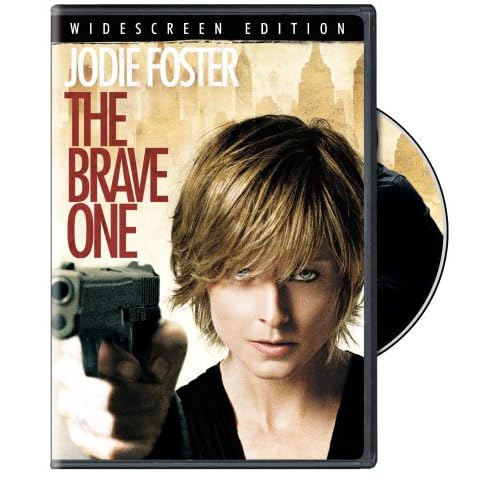 Written by: Roderick Taylor and Bruce A. Taylor

I really wanted to tell you how great this film was. I was pretty excited to sit down and watch and report to you that Neil Jordan had delivered another fantastic film. That Jody Foster had delivered the performance of her career. Sadly, none of the above came to pass.

This film plugs along seemingly by the numbers and offers no real surprises and interesting insight to the ideas. Jodie Foster, radio personality Erica Bain, is deeply in love with her fiancé David (Naveen Andrews). As they take a walk late at night in Central Park a bunch of thugs beat them brutally hospitalizing Erica and killing David.When the cops can’t find David’s killer Erica decides to get a gun of her own. Since she doesn’t have a permit the gun store won’t sell her one but conveniently there is a guy waiting out side to do just that. Soon after she gets her gun she just happens to be in a convenience store where a man comes in and shoots the clerk. He sees Erica and attacks her, she ends up shooting him. Later she’s on a subway where some thugs (not the ones who killed David) harassed the other passengers then threaten her. She shoots them too. This goes on and on, as the body count raises her so, seemingly does her blood lust.

This goes on and on while Detective Mercer (Howard) tried to figure out who this new vigilante killer is. He befriends Erica because he is a fan of her radio show, which is now very focused on these very killings that she is committing. And to top it all off the ending is so pathetically unbelievable that it just makes you laugh.

In some ways if feels like a poor retreading of Falling Down only with a female lead. This film is filled with clichés and unbelievable coincidences that you’re neck will be sore from shaking it in disbelief. Neil Jordon has proved himself as a competent director on more than one occasion. It isn’t the fault of the actors because despite the trite dialog and other faults Foster and Howard give good solid performances. So it can only fall to the screenwriters for why this film is so uninteresting.

This film is presented in 2.35:1 widescreen. Sound is in Dolby Digital 5.1. Also dubbed in French and Spanish.

I Walk The City: (21 min.) According to this doc, the big twist on the genre is that it as a female lead. Sure, that’s a good idea, but the good idea was not implemented properly in the film. This is a pretty typical “oh look how great this film is!” kind of making of.

Intimate And Moving Additional Scenes: (6 min.) Uh, when you have to tell the viewer how they’re supposed to feel about the additional scenes in the title then you’re really stretching. Then to top it off these scenes are neither intimate or moving.


The Inside Pulse
On the box this film is described as Jordan’s “homage” to the vigilante film, however I’ve always thought an “homage” was supposed to at least offer something new or interesting to make the film so it wasn’t a complete rip off. Sadly the makers of this film forgot that part.