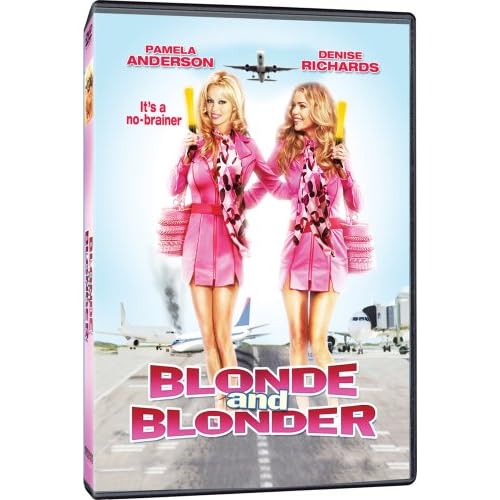 Sometimes movies are so dumb that they are actually funny, because they were meant to be dumb. Sometimes the converse is true and movies attempt to be funny, but just end up being totally dumb and laughable for all the wrong reasons. It’s a thin line to walk and only movies like Dumb and Dumber and Legally Blonde can even attempt to succeed at this genre of film. So what happens when you mix those two films together? You might end up with a movie like Blonde and Blonder. Then again, you might not.

In Blonde and Blonder, two lovely blonde best friends, Dee (Pamela Anderson) and Dawn (Denise Richards), find themselves in the wrong place at the wrong time and witness a mob hit. Due to a series of amusing coincidences, two mafia men confuse them for a couple of top female assassins. After taking the information back to their boss, the mobsters decide that the duo might be perfect for their next hit and offer the girls an absurd amount of money to complete the job. Their task will be to take out the head of the rival Chinese mafia, Mr. Wong (Byron Mann). With the money involved, and greatly misunderstanding the meaning of “take out”, the two blondes happily accept, but soon find themselves in way over their heads as they go on a wild road adventure, simultaneously having to dodge federal agents and real mobster hit men.

The plot of this film attempts to be funny. It tries to make you laugh, but it really doesn’t succeed. The premise is decent enough, but the acting is really not that good. You might could argue that the actors involved in this film aren’t given much to work with, and you would be right. So you can’t really blame them for an extremely flawed script that looks good on paper, but turns out to be a really bad idea in execution.

Ironically enough, the main positive for this movie is the acting or should I say “attempted acting” from Pamela Anderson. Pamela Anderson really does show a lot of potential of being a great comedic actress, since it’s clear that she doesn’t take herself too seriously. She tries extremely hard to make you laugh, but again she is not given much to work with. Denise Richards is an okay choice as Pamela’s “blonde” sidekick, but she looks more out of place here than Anderson.

Blonde and Blonder easily falls into the “so dumb that it’s not funny” category. The laughs are really kept to a minimum here. You can’t fault Pamela Anderson for that, though. She gives it maximum effort here and attempts to carry both the script and Denise Richards for the most part. There is just too much going against her, though, to keep her head above water. Maybe an “R” rating and some more sex appeal could have helped this film, but that’s highly unlikely. This film quickly sinks into a black hole to hopefully prevent anyone from seeing this film again.

The video is given in 1.78:1 anamorphic widescreen color, which is enhanced for 16:9 TVs. The video is pretty basic. The film was cheap to make, so not the greatest quality here but it’s passable.

The audio included is available in either English Dolby Digital 5.1 Surround sound or Spanish Dolby Digital 2.0 Stereo sound. There are subtitles available in English SDH and Spanish as well. Whenever someone is talking inside of a vehicle, the sound gets muffled and it gives off this weird echo sound. Once again, this movie is cheap so not the greatest audio quality.

“The Making of Blonde and Blonder” Featurette
This featurette runs 14 minutes and it’s your standard “behind-the-scenes” featurette. This is actually somewhat entertaining as it at least appears that it was fun making this movie.

Bloopers
The standard collection of goofs and mistakes. It runs for 6 minutes. There are actually a few things to laugh at here, so if you want to get a laugh or two from this film, go here first.

I can’t really recommend a rental, not even for Pamela Anderson or Denise Richards fans. This is pretty dumb, even for “dumb movies”. Not even enough sex appeal to recommend it to teenaged boys.