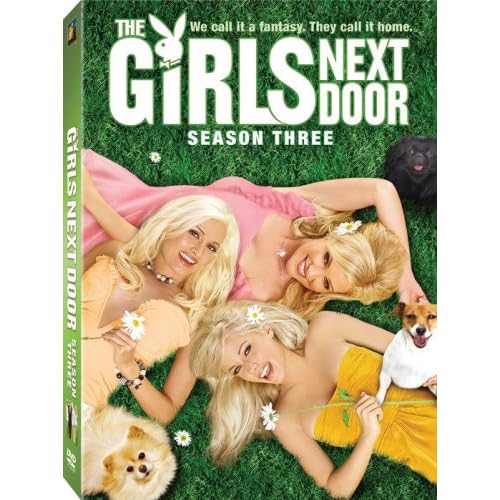 It’s always refreshing to know that there are some television shows that know what they have is a good thing and don’t mess with a winning formula. Three years ago, the E! network took you behind the gates of the Playboy Mansion and into the lives of Hugh Hefner and his three girlfriends, Holly, Bridget, and Kendra. It became a surprise hit for the cable network, and it only has gotten more popular as years went by.


Once again, the stars of this season of The Girls Next Door are actually the three girlfriends of Hugh Hefner. Hefner has an active role on the show, but compared to his girlfriends he is just a mere supporting player. In addition, during this season we get to meet a variety of people that interact with Hugh, Kendra, Bridget, and Holly on a daily basis.

Even though Kendra, Holly, and Madison look similar, each girlfriend has a different personality and style that is unique and really makes the show work. Holly is still Hugh’s “main” girl. She constantly drops hints to him that she wants to get married. She is still the “smart, more businesslike” girlfriend for Hef. This season she dives deeper into the business side of Playboy. Bridget is still the energetic girlfriend for Hef despite being the oldest of the three girls. She continues her journey into the entertainment side of Playboy, where she now has her radio show on Sirius Satellite radio. Finally, we have the youngest girlfriend, Kendra. She is the funniest and the wildest. She may not be the smartest girl around, but you can’t help but love and laugh at her and her addicting laugh. She is still Hef’s “sporty” girlfriend that lets him feel young again.

Just like the previous three seasons, if you think that this show is nothing but naked women running around all the time you will be disappointed. There is actually less nudity than you might think. That’s not to say that there isn’t any nudity, because there is usually a few scenes in every episode where there is. But really there is just the right amount of nudity to go along with “storyline” of each episode. The women are beautiful with or without their clothes on and you really won’t notice the lack of nudity once you start watching the show. In fact, when you do notice the nudity it feels quite natural. Nudity is really no big deal at the Playboy mansion.

By this point, we know what these girls are all about. There are times during season three where you might think you have seen this all before in previous seasons, and you may be right. However, Hugh and his girlfriends are still highly entertaining to watch. Just when you think you have seen or heard it all from these girls, they surprise you once more and you can’t help but smile. There really is no better place to live in the world than the Playboy Mansion. If you can’t get a job with Playboy, then watching The Girls Next Door is still the next best way to enter the world of Playboy.

Episode 1 – Snow Place Like Home
It’s Christmas at the Mansion and the staff works like elves to create a winter wonderland for Hef and the Girls — complete with a snow-covered front yard! While stockings are hung in Hef’s bedroom with care, what to buy Hef becomes a difficult affair. “Will the San Diego Chargers fit under the tree?” Kendra wonders as she snowboards with glee. The girls struggle to find the perfect gifts for the man who has everything.

Episode 2 – May the Farce Be with You
It’s a new year at the Mansion and the girls set out to fulfill their resolutions for 2007. Holly pledges to bond with her girlfriends — starting with a horseback ride through the Hollywood Hills — but not before dressing up as Princess Leia to help decorate a Star Wars-themed float for the Rose Bowl Parade. Bridget wants to move her career in entertainment forward and gets a lesson in commercial voiceovers. Playmate Julie McCullough helps Kendra accomplish her goal for the year: to clean and organize her room.

Episode 3 – Let Them Eat Birthday Cake
Holly celebrates her birthday by throwing a party fit for a queen — and a king. While Kendra struggles to find an “old fashioned” party dress for the Marie Antoinette-themed party, Mr. Hefner surprises his main squeeze with a golf cart detailed by Bridget. On the big night, Holly’s friends gather at the Mansion for food and fun wearing sexy period costumes.

Episode 5 – Calendar Girls
Holly gives direction to Kendra and Bridget on solo photo shoots for their 2008 calendar. Bridget wants to give her fans “something fun and creative” and chooses a vintage Valentine look. Kendra declares her “booty shot” her “signature pose” and channels Mae West for her shoot. Holly’s scenarios include Jacuzzis, snakes and Alaskan taverns, which complete her vision for “sexy winter pictures.” Hef scrutinizes the mockup and declares the calendar a winner.

Episode 6 – Snowboarded
The girlfriends head to Vail, Colorado to snowboard with Olympic gold-medalist Shaun White. Holly and Bridget practice their moves on the bunny slope while Kendra works on “getting that rail.” Before heading back to Hef and the Mansion, the girls enjoy getting in-room massages, eating eel elk at the lodge and decorating a “panty’ tree.

Episode 7 – Hearts Afire
Valentine’s week at the Mansion starts with a round of dominoes, gift baskets full of Playboy merchandise and dinner for Hef, the girlfriends and a few Playmates at Trader Vic’s. The Mardi Gras party provides a perfect end to the week: Bridget’s costume wows her friends; Holly proves that less of a costume is more; and Kendra hooks her brother up at his first Playboy party.

Episode 8 – PMOY Not?
The eagerness to learn who will become the next Playmate of the Year has the Mansion buzzing as the girls get to know the finalists.

Episode 9 – Family Affairs
The girls spend some quality time with those other important people in their life that being their families.

Episode 10 – Home, Sweet Suite
It’s an opportunity for Holly to reprise her role as apprentice as she works on a second Playboy pictorial, this time with some of the Bunnies from the Playboy Club in Las Vegas.

Episode 11 – Training Daze
Tired of “sitting like a guy,” Kendra decides to take etiquette lessons and learn the do’s and dont’s of cussing, licking her knife and drinking from a pimp cup. Holly continues her Playboy photo department apprenticeship and adds her own flair to an upcoming pictorial. Bridget uses the help of a dog trainer to turn her aggressive pup Wednesday — who’s also her radio co-host — into a good girl.

Episode 13 – Surely You Joust
The Girls go with Hef to a Renaissance Fair. Holly goes as Princess Aurora a.k.a. Disney’s “Sleeping Beauty”. Bridget goes as a wench. Kendra goes as a pirate. And Hef? He’s the King of France!

Episode 14 – Guess Who’s Coming To Luncheon
Barbi returns as a guest at the PMOY luncheon. Holly’s parents come too.

The video is given in fullscreen color with an aspect ratio of 1:33.1. Transfer is good with minimal distortion. It’s about as good as it was on national television, which is all it needs to be since that was pretty good as it was.

The audio included is available in English Dolby Digital 2.0 Stereo sound. No problems here either. There are subtitles available in English and Spanish as well. Again the quality of the sound is just as good as it was on television. No surround sound of anything, but there are no special effects or blaring music needed for this show.

Audio Commentaries –
There are audio commentaries from Holly, Kendra, and Bridget on all 14 episodes in this season. Once again, these are great as the girls are just as funny when they are watching these episodes as when they were in the actual episodes. Definite must-watch viewing again after seeing the season the first time.

“Bedtime Stories: The Best of the Girls Next Door” Special Episode –
This is your standard “Best Of” episode that was show on the E! channel as well. This lasted 45 minutes or one hour on regular television and it has the girls and Hef snuggling up to relive all of their favorite (and not so favorite) moments of the past three seasons of the show.

Deleted Scenes –
There is a little over one hour of deleted scenes from this season. That’s quite a lot. Unlike most deleted scenes, the majority of these are funny and worth checking out. Basically all of them were cut for time reasons. There are still some that don’t add much to the show, but they are all entertaining to watch.

Episode Promos –
Once again you have the option to view the promo and preview that was shown originally on E! for the next week’s episode before each of the episodes on this DVD set. Again, this really isn’t needed, since you don’t really need a reason to watch each episode when you have bought or rented the DVD set. You’re already going to watch every episode, whether you have a preview or not.

This is still one of the best reality shows on television. This is just a good fun show that is not that serious, but still has its touching moments. The show continues to remain fresh, even though certain episodes do remind you of previous episodes. If you haven’t seen the show, then you must rent it at least. You are sure to get hooked on the interesting world of Playboy, and will want to run out and buy every season of this show. You might think you know, but you have no idea.