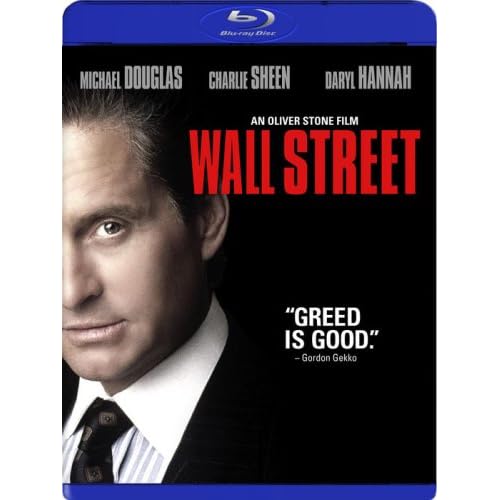 The 1980s were all about excess, especially in the corporate world. If there was one film that captured that underlining theme for the decade it was Wall Street. Oliver Stone followed up his “Best Picture” winner from 1986, Platoon, with another film that he had personal experiences with while growing up. This feature was really the first great film about big business. While some of the film’s subject matter is still fairly current twenty years later, the real question here is does Wall Street still hold up as a great film in high-definition today?

In Wall Street, Bud Fox (Charlie Sheen) is a Wall Street stockbroker in early 1980s New York with a strong desire to get to the top. Working for his firm during the day, he spends his spare time working on an angle with which to approach the high-powered, extremely successful, but ruthless and greedy, broker Gordon Gekko (Michael Douglas). Fox finally meets with Gekko, who takes the youth under his wing and explains his philosophy that “Greed is Good.” Taking the advice and working closely with Gekko, Fox soon finds himself swept into a world of “yuppies,” shady business deals, the “good life,” fast money, and fast women; something which is at odds with his family including his estranged father (played Martin Sheen) and the blue-collared way Fox was brought up.

The basic premise of the film is not that unique. There are lots of films where there is a young, eager, and naive hero who is taken under the wing
of an evil person, who happens to be both charismatic and powerful at the same time. The young hero slowing crosses over to the “dark side” until he realizes what is happening near the end and attempts to right all the wrongs that he has done throughout the duration of the movie. While the basic premise might not be unique, what makes the story in Wall Street unique is just that. This was the first time that the world of Wall Street was truly examined in a film. That helped make this film feel fresher than it actually was.

But what truly made this film great and memorable was the acting, most importantly the two leading stars Michael Douglas and Charlie Sheen. Michael Douglas was not considered a great dramatic actor at the time, but Oliver Stone took a chance on him for the lead of Gordon Gekko and it worked. Douglas played Gekko to perfection and it’s easy to see why he won the Best Actor award for 1987 with this role. Equally superior to Douglas’ portrayal of Gekko is Charlie Sheen’s portrayal of Bud Fox. This is probably the best performances for Sheen and Douglas here. Oliver Stone made some risky casting choices, but that all worked in the end, except for one notable exception. That being Daryl Hannah. She earned the Razzie award that year for Worst Supporting Actress and deserved it. She looks totally out of place and uncomfortable as Sheen’s love interest. Even Stone admits that he made a mistake in casting her in that role.

The heart of Wall Street is a morality tale. Wealth and power go head-to-head with simplicity and honesty. Bud’s father Carl represents the blue-collar class to Gekko’s representation of the white-collar class. Carl Fox is almost like the voice of reason for the film, which is a contrast to Gekko’s character. But really this movie is all about Gekko. His “Greed is Good” speech is probably the most memorable lines from the movie, but their are a countless number of lines that are still quotable today.

Wall Street has become famous or infamous for a a lot of things. It had the distinction of having both the Best Actor and Worst Supporting Actress in 1987. But more importantly its famous “Greed is Good” line perfectly summed up the 1980s. At times, the character of Gekko even surpasses the story and takes center stage, which can be a little too much to handle when it seems like he is always preaching about something. But at the same time, the character of Gekko (and Bud Fox to a lesser degree) make this film great. The subject matter unfortunately still holds true today, because there is still as much corporate greed and deceit as there was in the 1980s. So the legacy of Wall Street will continue to live on until the lessons taught in this film get taken to heart instead of just being noted.

The video is presented in 1080p/AVC 16 MBPS at the 1.85:1 anamorphic widescreen color ratio, which is enhanced for 16:9 TVs of course. They actually advertise this to be a 2.35:1 ratio, but that is wrong since the movie fills the entire screen here. Keep in mind that this film is twenty years old so that is a lot of wear and tear here. Graininess persists throughout the film, especially at the very beginning. As you can easily see, this was an odd choice for a high-definition upgrade since the video quality is barely an upgrade over the recent 20th anniversary standard definition DVD. Basically, this is as good as it’s every going to get here.

The audio included is available in either English DTS Lossless Master 5.1 Surround sound, Spanish 1.0 Mono sound, or French 1.0 Mono sound. There are subtitles available in English, Spanish, French, Cantonese, and Korean as well. The audio is definitely better than the video, but there is no need for surround sound here. This is a mainly dialogue-driven film, though, and the dialogue does come out loud and clear here so that’s all you really need.

Audio Commentary
There is a full-length audio commentary with the director and co-writer, Oliver Stone. Stone speaks with such matter-of-fact seriousness that it seems like he is not that excited about this movie. There is the occasional joke, but for the most part this is nothing but information. Among the tidbits to gain from Stone’s commentary is how personal a film it was to make, as his father worked on Wall Street for decades. Overall, some good insights into why Stone made the film in the first place, and what kind of message he was trying to send with the two main characters. But not as entertaining as some other commentaries.

Introduction by Oliver Stone
There is a one minute introduction for the film from the director, Oliver Stone. He briefly talks about the importance of the film twenty years later. This was filmed for the 20th Anniversary DVD, so it’s a little odd it’s on this disc as well, but there you go anyways.

“Greed is Good” Documentary –
This featurette runs for nearly one hour and it focuses more on the real-world perspective from investors who were around in that era. There are also interviews with the majority of the cast and Oliver Stone about the movies. Lots of information, but does get a little long. Still it’s interesting.

“Money Never Sleeps: The Making of Wall Street” Documentary
This is your basic “making of” featurette that runs for 47 minutes. It does cover the some of the same material as the previous documentary and the commentary, but there is more focus with the making of this film and how certain actors prepared for their roles. It looks to be filmed 10 years prior to the other featurette, so there is less perspective. Again, does get a little long but there is still some worthwhile information in here.

Deleted Scenes
There around 20 deleted scenes that run for 22 minutes. There is also optional commentary with director Oliver Stone. He tells us why he wished some of these scenes weren’t cut. For the most part this were all cut for time reasons. There are actually some that add a little bit to the movie. Then there is a weird subplot with Penn Jilette that didn’t make it, which is probably a good thing.

Wall Street is a solid film that still holds true today. The story is simple, but it’s made greater by the characters and the actors portraying them. All of the extras on this Blu-Ray DVD release can be found on the 20th Anniversary standard DVD that came out 5 months ago, so there is no added bonus here. The film is also not upgraded that much by being in high-definition. So if you have the 20th anniversary version of the film, you probably will want to stick with that one. If you don’t own this film, this is probably the version to get as this is as good as this film is ever going to get. If you haven’t seen it, at least rent it. There is a slight recommendation to buy it as well.