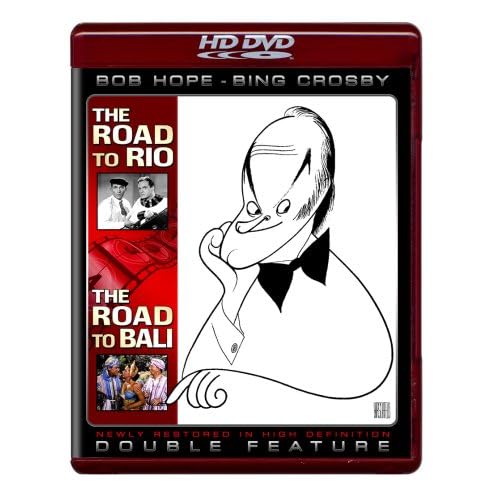 Bob Hope and Bing Crosby’s road films were a perfect formula for the duo. The two entertainers sang, danced and joked their way around the world (while remaining firmly planted in Southern California). There was plenty of mischief without tragic consequences. People keep trying their best to rip off these films (including TV’s Family Guy), but rarely do they touch the masters. Hope and Crosby knew how to look smooth while constantly getting into trouble. Hope with his cheesy humor and Crosby with his crooner tones dominated the screen. This double feature disc contains Road to Rio and Road to Bali.

Road to Rio has Hope and Crosby hitting the road after they burn down a circus. They sneak onto a cruise ship heading to Brazil. On board, they befriend Dorothy Lamour who isn’t quite her normal self. Turns out that she’s been hypnotized for a devious purpose. Between the various musical numbers, Hope and Crosby attempt to save their friend.

Road to Bali is the only one of the seven films to be filmed in color. The travelogue shots look like postcards in motion. Hope and Crosby are vauldvillian performers who have to flee Austrialia after they get groupie action. They scoot off to Indonesia for a deep sea diving gig. This must have been back before employers performed real background checks on applicants. Dorothy Lamour slathers on the body paint to play a Balinese princess. Both Hope and Crosby have eyes for her tinted flesh. They also a discover a huge eyeball from an evil squid that lurks around a shipwreck. There’s a really dumb fight between Hope and the squid. It’s one step above Ed Wood. Hope and Crosby dream of deep sea treasures, but their lust for Lamour might get them tossed overboard.

Don’t mistake these movies for true travelogues. This is not No Reservations with Anthony Bourdain. The films are purely Hollywood interpretations of the locations as recreated inside the studio. Nearly all of the screen talent is from central casting and not little villages along the way. The joy of these films has very little to do with realism. Hope and Crosby were perfect for each other on the screen. They knew how to poke each other and the audience with their corny humor. Others may try duplicate them, but they’ll never top their freakish vacations. If you like their first four Road to movies, the fifth and sixth journeys are equally entertaining.

The HD-DVD is in a red keepcase. It’s single sided.

Road to Rio is black and white and 1.33:1. While the 1080p HD transfers look nice, Road to Bali looks better. The color gives a nice glow on the screen.

The audio is Dolby Mono. There’s no nasty pops or scratches on the soundtrack.