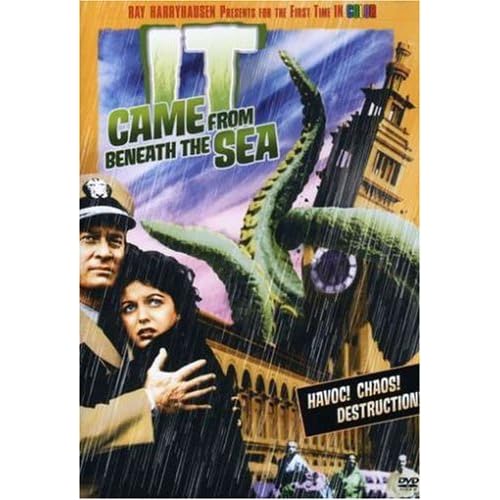 It Came From Beneath The Sea is a classic 50’s B Sci-Fi movie in every sense of the term. The acting is wooden as a tree, the dialog is flat and lifeless mostly over providing exposition, the actors are mediocre at best and it’s got an amazing radioactive giant (six-tentacled) octopus attacking San Francisco.


As the movie opens some unseen predator attacks an atomic submarine. A chunk of it is still attached to the sub and it’s given to a couple of scientists to figure out what the heck it is. When they determine that it is in fact a giant octopus, the government doesn’t believe them. That is until the beast destroys a giant fishing boat and a few men live to tell the tale. Before they know it the creature is destroying the Golden Gate Bridge and all of San Francisco – or at least it’s coast – is in danger!

Much of It Came From Beneath The Sea is spent trying to scientifically explain how and why this giant octopus is suddenly attacking ships and submarines. From a page out of Gozilla, underwater H-Bomb testing is the culprit. Apparently, the radiation from the bomb has infected the octopus making it unable to eat food in its normal habitat deep in the ocean. So hunger forces it come to the surface and feed on human’s I guess. The whole thing is, of coarse, ridiculous but that’s part of the campy charm. Not to mention the scientist’s design and build a bomb specifically intended to destroy the beast in one day.

The romantic relationship between Peter Mathews (Tobey) and Lesleyl Joyce (Domergue) is hilarious! Mathews is a tough military type and Joyce is one of those “new breed” of women. I suppose to credit must be given to the film in that it has a strong independent female lead. But it is the women’s movement as filtered through the 1950’s men who wrote the picture so it all feels dated and embarrassing, but still entertaining.

The real star of this film is never seen on screen. And this is stop-motion animator Ray Harryhausen. While he wasn’t the first to utilize the process in film, he certainly revolutionized and paved the way for everything that came after. You don’t watch a movie like It Came From Beneath The Sea for the gripping characters, compelling stories, and wonderful dialog, because they aren’t there. You watch this film because you want to see a giant octopus wreak some havoc, and wreak it does. The octopus in this film is fantastic and while it doesn’t appear in as many scenes as one might hope when you do get it, it’s not the least bit disappointing. You just have to sit through all the bad live action stuff to get to the good nuggets hidden within.

This film is presented in 1.85:1 anamorphic widescreen. Sound is in Dolby Digital 5.1. Also dubbed in Spanish and Portuguese. French, Spanish, Portuguese and English subtitles available.

It is worth noting that in this release the film is being presented for the first time in color. And before you get all snooty and raise your nose like somebody farted. It must be pointed out that Harryhausen himself states that if they’d had the budget they would have shot the film in color at the time. He helped over see the colorization process and it surprisingly looks pretty good. Accept for a few moments here and there, mostly in the background, you can hardly tell that it has been colorized. And if the idea of colorization still gets under your skin after that, don’t worry, you can still watch the original black and white version as well.

ChromaChoice: Use your angle button to toggle between color and black and white throughout the film to compare and contrast.

Commentary with Ray Harryhausen, visual effects artists Randall William Cook and John Bruno, and Arnold Kunert: This is a really good commentary. Harryhausen has many fascinating things to say about the making of this film and he is a joy to listen to. The other guys have good stuff to add as well and also provide Harryhausen with good questions to keep him talking.

Remembering It Came From Beneath The Sea: (21 min.) Ray Harryhausen talks about making the film and manages not to repeat too much info that is learned in the commentary.

Tim Burton sits down with Ray Harryhausen: One need only look at The Nightmare Before Christmas, the opening credits to Ed Wood or scenes in Mars Attacks! to know that Tim Burton is a HUGE Harryhausen fan and was vastly influenced by him. Burton manages to fit a few questioned in between his gushing dorky fandome of this idol of his. It’s amusing to see a famous director turn into a fanboy. This is a great interview.

Galleries: (28 min.) Ad Art Photos, Production Photos, and Ray Harryhausen’s Artwork Photos. These three galleries are edited together with music from the film. It’s nice to get to see this stuff without having to toggle to the next image. And if it’s moving too slowly you can always fast forward.

It Came From Beneath The Sea.. Again! Comic Book: Flip through the first few pages of a comic book sequel to the film. This isn’t very interesting.

A Present-Day Look at Stop-Motion: (11 min.) This could have been interesting but instead of having someone from the industry talk us through the process, they got a student from NYU to do it. Kinda lame.

Original Ad Artwork: (17 min.) Producer Arnold Kunert talks about how Ads worked for films in the 50’s and shows all the different artwork that was done for this film. This is pretty damn boring and goes on WAY too long.

David Schecter On Film Music’s Unsing Hero: (22 min.) Mischa Bakaleinikoff was a studio composer for Columbia in the 50’s and would use stock music mixed with some new music to create the soundtracks for the B films at the time. It takes Schecter 20 plus minutes to explain this. Parts of this are really interesting but Schecter is annoying to listen to and he drags it out longer than needed.

The Inside Pulse
If you like 50’s B Sci-Fi films, if you enjoy watching a stop-motion octopus destroy San Francisco landmarks, then this is a must see film for you. If you can’t stomach bad acting and dialog even for the camp value then avoid this. You won’t be able to appreciate the parts of the film that are genius.