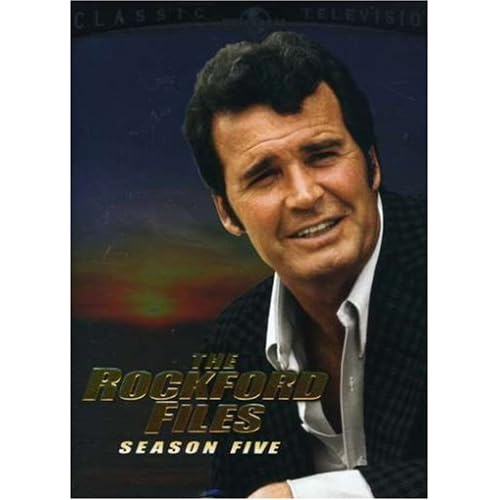 When you’re in urgent need of a TV private eye call Jim Rockford (James Garner). He might not be the slickest snoop with all the high tech gadgets, but he gets the job done for a reasonable price. He doesn’t mind getting dirty to close a case. After three decades, The Rockford Files is still the gold standard of TV detective series. This boxset contains the final full season for the show. The sixth season was cut short at a dozen episodes when Garner’s body couldn’t take the punishment of the role. Season Five doesn’t limp as Rockford habitually falls into trouble. If you ever wonder why Rockford is constantly broke; he needs to attract a higher class of employers. Most of his intriguing cases were non-paying clients including himself.

“Heartaches of a Fool” has Rocky (Noah Beery, Jr.) getting into a massive wreck when his semi is forced off the road. His spilled cargo consists of sausage sponsored by a major country music star (Taylor Lacher). Rockford has to clear his father’s name in this accident. He can’t figure out why anyone would wreck the truck instead of hijacking the load. Turns out the meat isn’t processed as promised and there’s underworld connections grinding the pork. Rockford hunts down the country music singer to get to the truth of what goes in his hot dogs. Instead of having Lacher sing, they play Willie Nelson tunes.

“The Battle-Ax and the Exploding Cigar” puts Rockford behind bars. After a dismal gambling trip to Nevada, Rockford has his car impounded by the casino until he pays his debt. He attempts to get home by being the designated driver to a drunk. His passenger’s open booze bottle gets them pulled by the cops. Things go especially wrong when they discover illegal goodies stashed in the trunk. The troubles spiral into a federal case. Rockford’s fears major prison time if he can’t clear his name.

The big surprise of the season is Tom Selleck on “White on White and Nearly Perfect.” Before he ran off to Hawaii to become Magnum P.I., Selleck played Lance White, a self-righteous, posh P.I. He’s truly the anti-Rockford with his attitude, techniques and relationship with the cops. Garner and Selleck look great sharing the screen playing old dog-lucky pup.

The Rockford Files: Season Five captures a low budget P.I. still at the top of his game. His golden Pontiac Firebird glistens as he chases down a lead. There may have been glitzier detective shows on network TV, but Rockford dazzled with gut instinct. He felt real even on the most superficial or ludicrous of cases. Garner might have been dealing with severe pain from various injuries, but he didn’t allow his character to half ass it. You need help, leave a message on Rockford’s answering machine.

“Heartaches of a Fool,” “Rosendahl and Gilda Stern Are Dead,” “The Jersey Bounce,” “White on White and Nearly Perfect,” “Kill the Messenger,” “The Empty Frame,” “A Three-Day Affair With a Thirty-Day Escrow,” “A Good Clean Bust With Sequel Rights,” “Black Mirror” (Two-parter), “A Fast Count,” “Local Man Eaten by Newspaper,” “With the French Heel Back, Can the Nehru Jacket Be Far Behind?,” “The Battle-Ax and the Exploding Cigar,” “Guilt,” “The Deuce,” “The Man Who Saw the Alligators,” “The Return of the Black Shadow,” “A Material Difference,” “Never Send a Boy King to Do a Man’s Job” (Two-parter) and “A Different Drummer.”

The five DVDs are in a tri-fold digipack inside a sleeve. The last two panels have the final four DVDs stagger stacked. The episode summaries are on the outside of the digipack.

The picture is 1.33:1. The prints however are not from the most pristine sources. There’s dust and a scratch popping up on some episodes.
The soundtrack is English Dolby Digital Mono. The subtitles are in English.