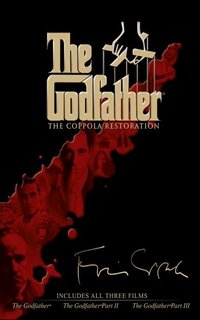 Leave the gun. Take the Cannoli.”

The arc of every mob film is about the rise and fall of a man. None do it more gracefully than The Godfather trilogy, which is about the fall of a good man and his rise as an equally bad man.

Michael Corleone (Al Pacino) is a war hero whose family isn’t just associated with organized crime: It IS organized crime, as his father (Marlon Brando) is head of New York’s Corleone crime family. Michael’s brother Sonny (James Caan) is a secondary boss in the family alongside their brother Fredo (John Cazale). Tom Hagen (Robert Duvall) is their adopted brother and the family’s consigliere, the family lawyer and advisor. Connie (Talia Shire) is their sister and whose husband Carlo (Gianni Russo) is an associate of the family. When Don Corleone dies, Michael resumes his mantle and leads the family. The film is a look at his rise to fame, takeover of the family and eventual death. This is Michael’s series; everyone else is just a player in the drama. It is the role that defined Al Pacino’s early career and made him into a star, but not one which he would win an Oscar for shockingly enough.

The names are legendary: Pacino, De Niro, Duvall, Brando, Diane Keaton, Shire and Caan are cinematic legends and assembled in one cast is something to behold. A handful of Oscars for best acting, as well as an armful of nominations, and years later the cast is etched in cinematic lore for this and other work. No other film series has this.

The Godfather starts with Connie and Carlo’s wedding, where the Godfather (Brando) is conducting business. As we follow the family, times are a changing and Michael represents a light in a sea of darkness. He’s the family’s best shot at being a legitimate businessman, of being the one to escape the criminal behavior of the Corleone family. Sonny is the heir apparent, but a hothead who uses his fists more than his brain. Fredo is the weak one, the one who will always be there but never a leader. An epic story, The Godfather spans the end of one era and the beginning of another as Michael assumes control of the family. It’s the rise, the first act in the rise and fall. It also happens to be one of the greatest motion pictures ever made.

The Godfather Part II is Michael’s ascension to the top of the criminal underworld. With the family moving out west to Las Vegas, Michael must deal with the threats that come from his position. Juxtaposed against this is the rise of his father, played as a younger man by De Niro. At this point Michael’s nobility from the first film is gone, as he has become the sort of ruthless man his father eventually became, which plays out at the same time Michael is consolidating his empire. It makes for an interesting turn to see father and son follow the same path. It also happens to be the greatest sequel and considered perhaps even better than The Godfather.

The Godfather Part III is the weakest of the trilogy, as it follows the descent of Michael Corleone from all powerful Godfather to his fall, as he loses everything. The theme of this film is salvation, as Michael tries to redeem himself and his family but finds he can’t truly repent for his sins. Alone, in a wheelchair, Michael dies and ends the tragedy that is The Godfather. In terms of cinema it may not have been the best film to end it, but in terms of storyline it was the best way.

And that’s what the trilogy inherently is: a tragedy. Michael is a good man at first who does many heinous things, including some of cinema’s most memorable murders. This is about a crime family but ultimately it’s about one man who’s gone awry and tries to find redemption for a life of sin. Unable to find it, he dies alone. Michael’s character arc spans three films, with a cast of characters all leading him onto different paths.

His father wishes for him to stay outside the business, to be a good man, but ultimately knows his other two sons can’t be the next Godfather. Kay (Keaton) represents his shot at leaving the family business, but ultimately is unfulfilled as he loses her and everything else. Ultimately, her role will be that of the path not taken.

The Godfather trilogy is the pinnacle of American film-making. No other film-maker has been able to craft an engaging story told over three films on nearly the same level and is a must-own.

Revamped for this DVD release, the film has a widescreen format with a Dolby Digital sound, the film advertises itself as a “restoration” and doesn’t disappoint. All three films have been restored and made to look markedly superior then ever before. If you have a home theater system of any renown you’ll notice the differences immediately; the signature, iconic scenes of The Godfather are immaculate and the sound is top-notch. The Godfather becomes the a/v experience it should be with Coppola’s new restoration; unlike the prior releases, this one holds up to any modern film just released onto DVD.

Each of the film’s first three discs contains an all-new Commentary Track from Coppola. He has some fresh outlooks for all three films many years after their success.

The film’s Fourth Disc contains all of the extras from the film’s first release on DVD as a set.

It gives quite the insight, pulling no punches and not glossing anything over. From the head of Paramount swearing he would never use Brando in the film, and Coppola negotiating with him (and eventually Brando) into getting on board for the film, it covers all the controversy and shenanigans that arose making the film. One interesting piece has Pacino, Caan, Martin Sheen and a handful of legendary actors all tested for the role of Michael. Much in the same way that screen tests for Pacino, Kurt Russell and others make for interesting viewing in the Star Wars trilogy on DVD, seeing all of these legendary actors testing for parts as young actors. Caan relates a story about how he, Pacino and Keaton did some improv for Coppola for the cost of lunch and how he wanted to cast them, but eventually the studio paid $400,000 to screen test a ton of actors for all the parts and ended up with those same actors. Robert De Niro tested for Sonny along with “400 other guys” as he ends up recalling.

All of the principles from the entire trilogy are there to discuss the events surrounding the film-making process; it’s interesting to think that the film was made in the first place. Coppola and Pacino were both put through the ringer by Paramount, as they were both constantly second guessed and Coppola had a director following him around in case he got fired so that production wouldn’t miss a beat. The first film essentially was made with everyone in mortal fear they’d be fired from the film, as they tried to get enough film shot so that they’d have to keep everyone because the cost would be too much to recast and reshoot everything. Coppola goes through a notebook in one feature that features his notes all over individual pages of the book “The Godfather” and all his notes in the film, using Hitchcock as his motivation on how to set everything up. Taking a cue from Hitchcock in terms of his music selection, there is a feature with Coppola discussing the film’s music with both of the film’s composers (Nino Rota and Carmine Coppola) and storyboards from the second and third films in the trilogy are included as well.

It’s fascinating to see the perspective from over the years, as everyone gives commentary. Coppola never hadn’t initially wanted to do a third film, having felt that he wrapped it up in two films, but had a story arc that came to mind about Michael reflecting on his final days and all the misery he caused & people who had died at his hands. Almost two decades after the original, the third takes on a different atmosphere from everyone discussing it because this is the point where the principles of the cast came from being young and hungry actors to famous movie stars makes for an interesting discussion. Coppola had a hard time in negotiations for the third film and other events conspired against him; Duvall famously didn’t come back because of salary issues and Winona Ryder dropped out of the film because of illness.

Juxtaposed against the more recent footage is of the actors and crew in their younger days, providing a terrific comparison and an evolution of film-making from the first to the third films. This is the largest feature on any of the discs, as the rest follow and aren’t nearly as impressive.

Filmmakers are text profiles of the major principles involved in production of the film.

There are some more Additional Scenes from all three films included, none really adding much back into the film, as well as a Photo Gallery and the Trailers for all three films. Each of the film’s Oscar wins is included as well, acceptance speeches and all, with the exception of Brando’s legendary and controversial “acceptance” speech for Best Actor.

A Family Tree is included so you can keep track of everyone in the Corleone family.

This is how The Godfather trilogy should’ve been released the first time around. The a/v has been given a treatment worthy of its status as the greatest trilogy ever made and the extras are worth the cost of the DVD set alone. You can’t call yourself a movie fan without owning this.