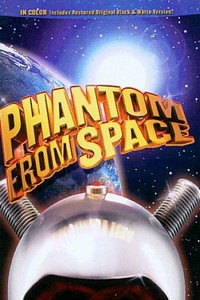 The 1950s was truly the hey-day for low-budget science fiction. It seems like anyone who could scrounge up a shred of an idea, $50, and a camera could find an outlet to release their very own science fiction movie. In retrospect, it’s amazing to think that science-fiction, as a genre, survived the 1950s. Because about 90% of it was complete dreck. The title alone should be enough to tell you if Phantom from Space is part of the dreck. Hint: It is.

The movie opens with a mysterious object streaking across the Earth’s sky. The object turns out to be an alien spaceship. The ship crashes and the alien emerges to wander around, kill a few random bystanders and emit high levels of radiation. This, combined with various people trying to track down the cause of all the deaths and radiation exposures, accounts for the first half of the movie.

Eventually the movie switches gears a bit and tries to make the alien a more the sympathetic monster. Also, he takes off his spacesuit, which means he is completely invisible (more on that later). The problem is the alien is not only invisible, but also mute (he can communicate telepathically, but the audience never hears his “voice”). It’s awfully hard to feel sympathy for an alien that you can’t see or hear, no matter what his motives.

The biggest problem with Phantom from Space is how generic it all feels. If you’re at all familiar with ’50s monster movies, there’s nothing here that comes off as the slightest bit original. The standard assortment of characters (scientists, military experts, attractive and patronizingly treated women, etc) go through the standard investigation scenes as they try to locate and stop a generic monster (technically it’s an alien in this case, but aside from the fact it arrives on Earth via UFO, and the film’s climax, it could be any random radiation-fueled monster). Even the title is incredibly generic. It’s all been done before.

The only way to enjoy this movie is to laugh at it. Phantom from Space does provide a fair bit of hilarity. The invisible alien effects are very low-budget, yet clearly intended to amaze. The invisible alien likes to pick things up with the trademark of all invisible creatures of the 1950s, string. The strings aren’t even well disguised; they are quite blatantly visible.

The movie’s science (and accompanying dialogue) also provides many unintentional laughs. For instance, the scientists speculate that the alien isn’t normally invisible. As a silicon-based lifeform, the alien is invisible because of exposure to Earth-atmosphere.

While there is some enjoyment to be had from the movie’s lesser moments, there is far too little happening in the movie. Phantom from Space commits the greatest sin a B-movie can commit: it’s boring. It may only be 73 minutes long, but it sure feels like a much longer film.

If you want a movie to epitomize the vast majority of 1950s sci-fi, Phantom from Space can give that to you. It’s got a misunderstood monster, lots of stock footage, the danger of radiation, slow pacing, cheesy dialogue, loads of scenes where scientists and/or police officers sit around and waste time, and terrible special effects (Throw in a mad scientist and his disgruntled assistant and you’d have every 50s sci-fi staple all in this one movie). There’s practically nothing unique or original about Phantom from Space. And more importantly, there’s very little in the way of entertainment either.

When watching the movie, you can choose to watch in either color or the original black and white. I have a feeling the primary reason the black and white option was included is because the colorization is crap. Most of the time, it looks just fine for any scene that takes place indoors, but when the action moves outside, the colorization is quite uneven. In pretty much every outdoor scene at least part of the shot still looks black and white. Anything or anyone that is in the shade as well as complex background images tend to lack color. When someone gets into a car, they suddenly go black and white, and become color again once they step back outside. I can understand not wanting to waste a lot of time colorizing an obscure, low-budget film from the fifties, but if you can’t make the color look good, you may as well not bother.

The video, unsurprisingly considering the era of the film, is in 1.33:1. Apart from the shoddy colorization, the video actually looks pretty good for the age of the movie. There’s occasionally dust and scratches, but no really serious issues. The audio is in mono and sounds like a movie that was made over 50 years ago; there’s both static and distortion at times.

Black and White or Sort of Color – Choose to watch the movie in its original black and white form, or the shoddy colorization.

Legend Films Trailers – Watch trailers for Plan 9 from Outer Space, House on Haunted Hill, Night of the Living Dead, She, and Reefer Madness.

A bare bones release for a bare bones movie. Even the biggest fan of ’50s sci-fi will probably want to take a pass on this one.