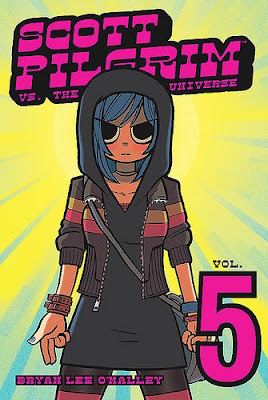 In an attempt to bring you more great content and to up my own writing about commets, this is the beginning of a weekly random trade review. Hope you enjoy and let me know what you think either in the comments or at hbk826@gmail.com.

Scott Pilgrim is, for those who remain blissfully unaware of the indy comic world, basically the most popular indy comic going today to the point where the book is the basis for a soon to be released major motion picture (that means a movie, natch). Bryan Lee O’Malley has crafted a story based around fun, 24-year-old shmuck Scott Pilgrim fighting for the love of his girlfriend, Ramona by fighting her 7 evil ex-boyfriends in hugely gratuitous video game style fight scenes. This volume is book 5 and I’ll say right off the back, 1-4 are absolutely worth reading, so, feel free to buy them right freaking now.

These books started out as light-hearted romps, but have since become a coming of age story for Scott and his close friends. Even background characters get major development here, though it’s often subtle. This book continues the series trend of increasing in seriousness each volume, but in my dissenting opinion, O’Malley has taken the drama into too dark a realm for these characters here.

Since in each issue Scott overcomes insurmountable odds in the form of Ramona’s exes, this issue treats that fact as given and instead of focussing on the fights, focusses on how Ramona and Kim, (Scott’s band’s drummer who he has a history with), deal with said fights. This would be well and good if the tone from earlier volumes was given more than lip service. The character development is fantastic, but the rest of the previously strong supporting cast is fading further and further into the background. These other characters added a layer of silliness, so I can see why they’re less present, but Scott needs that to play off as he’s a bit of a dork, and Ramona, his love interest is both quite serious and often not likable, leaving Scott himself far less likable than he was in volumes past, through no fault of the character himself.

With Ramona constantly being cold and Scott clueless when in a serious situation, this leaves us with Kim as our point-of-view character. Kim has been, for at least the past two volumes, remarkably handled. She’s got complex, layered motivations that are slowly being unturned and her playing off of the angst of the main characters with some subtle and not so subtle manipulations is the single best aspect of this book.

Ultimately, this book came off as unsatisfying and not because it ended in a cliffhanger. I think much of the problem is that the upbeat theme’s of earlier issues, such as fighting for what you value and pulling your life out of the gutter, take a backseat here to a far worse message: you might not even know those you love and as you grow up the universe turns against you. It’s surely a valid interpretation of the world, yet it ventures so far from wha tmade this series so likable as to alienate this reader. With the protagonists losing their likability in the proccess of delivering a pessimistic worldview, I can’t help but view this book as a failure. While as the second-to-last volume, this is almost assuredly going to be turned around and is merely meant to build drama before the triumphant finish, I ended up losing my desire to see Scott and Ramona together- their relationship became too like the confused and co-dependent youthful relationships that we’ve all experienced or witnessed by a certain age. While that’s certainly skillful writing, and make no mistake, this book is still extremely well-written, as a stand alone volume likely a year before the next comes out, the decisions made with major characters and moments left me longing for simpler times for the book. While that’s certainly part of the point, there is simply no going back and this bad taste will effect any later attempt at a happy resolution, since I simply no longer by these two as a viable relationship or particularly want or am invested in them succeeding. Hopefully O’Malley has something up his sleave, but, for now, this was quite the dissapointment.