This week: Defending The Watchmen!

There’s really nothing like getting to see one of your favorite movies on the big screen. I know the gap has been closed in the theater/home theater department in the last few years, but seeing a movie in a packed theater with fellow fans is still a really special experience. I know I’ve talked about the Kentucky Theater a lot in my column, the local art house in my area, where they’ve played some of my favorites in the past, letting me get to see Seven Samurai, The Good, The Bad, and The Ugly, Evil Dead 2, 2001, Conan and others that I wouldn’t normally get to see, but even more surprisingly, one of the local multiplexes, The Regal Cinemas 16, also got into the act and started playing classics too.

So thanks to them, I can finally cross Raiders of the Lost Ark off my list of movies I’ve gotten to see on the big screen. Getting to experience the movie like that really drives home just how perfect Raiders really is. The movie is one of those crowd pleasers that audiences will probably never tire of, and it will never stop delivering on the same thrill its always had. Even with a print with tons of scratches and the occasional frame missing, there’s no way of watching that movie and not getting excited during the truck chase or watching Indy come out of the water and climb onto that Nazi sub without cheering. The Lucas/Spielberg heyday was meant to be seen on the big screen, and getting to see Raiders is the last of those collaborations that was missing from my list.

The experience also brought me back some to my experience with Watchmen a little. For a big budget studio epic, I know that Watchmen will never have the universal appeal of a movie like Raiders, and probably won’t even have the mass appeal of a movie like 300. Reactions have been a little half and half with my friends and colleagues. I’ve known some that thought it was a masterpiece, others that thought it was too slow or too depressing for a comic book film. These are reactions from a wide variety of people who had never read the book all the way to people who make it a yearly tradition to revisit it.

The movie is just going to continue to probably divide people who see it. I think The Dark Knight helped pave the way for a movie like this, where people can try to take a film with superheroes a little more seriously, but still there’s a point where many just want more “popcorn” from a picture like this, instead of a movie that’s really trying to challenge people’s perceptions of superheroes. I’ve gotten downright angry at some critics who attacked how faithful the movie is, saying it should have tried to be its own thing, and then others have claimed the movie lost its way and shouldn’t have changed anything from the book at all.

Honestly, Snyder had to kind of bite the bullet here, because no matter what he did some group of people weren’t going to be happy. I think the gripe that I have the most problems with was one critic who seemed to claim that the movie had too much background for its characters, namely Dr. Manhattan, played by Billy Crudup. First up, I’d like to point out that Mr. Crudup’s performance is one of the finest in the entire movie. 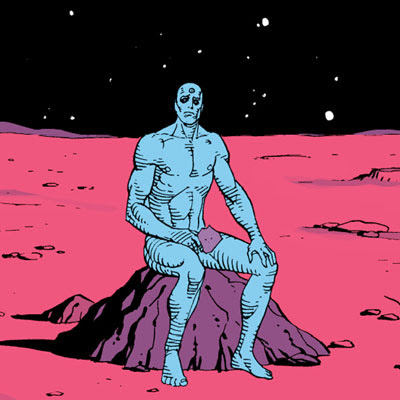 In the past, Dr. Manhattan has always seemed to be a character that was a little cold, but that was kind of the point to him. These powers of his and how he obtained them were all part of this arc that leads to his separation from society, and eventually humanity as a whole. In many ways, the character itself represents America in some ways; growing so powerful as to completely grow apart from the concerns of the rest of humanity on Earth. It is when humanity starts to strike back and remind Manhattan of just how separated he’s become does crisis ensue.

Like I said before though, the character has always kind of come off as cold to me in the past when reading it on the page. It wasn’t until Billy Crudup’s interpretation of the character that I really saw humanity in his blue form for the first time. There’s gentleness about Manhattan, all soft spoken and rather innocent, that never really came across on the page. Even as he does incredible feats, like pulling a tank apart or turning gangsters into blood soup, there’s this feeling that he’s not doing any of it maliciously. For him, it’s a mundane task, the same as one of us tying our shoes, and that’s a concept that is hard to really get across and still make this character somehow relatable, but Crudup manages to do so.

On the other hand, it greatly helps to have those portions of Manhattan’s story, where he relives his life as he builds his crystal fortress on Mars, to really find the character’s human center. Just as it is in the original text, this is undoubtedly one of my favorite portions of this story. Emotionally, this may be the most powerful thing that Alan Moore has ever set to page, and in many ways was probably one of the hardest sections of the original graphic novel that Zack Snyder had to reproduce.

While Snyder utilizes flashbacks, Moore managed to brilliantly tell this story as if the entire life of Dr. Manhattan played out at the same time, even fragmented conversations with others overlapping until the other person caught up to the point in time where Manhattan already was. It’s an amazing sequence in the book, and Snyder pulls it off about as well as he can using flashbacks, relaying the tragedy of Manhattan’s life from the son of a watchmaker, to a man deeply in love, to a god with the fate of humanity in his hands. Yes, it brings the movie to a halt for a bit, but by conveying such tragedy, Snyder manages to put a real human face to this story, even if it’s the one belonging to the being closest to resembling a god.

I think it’s a credit to the cast though, that I like everyone else in the film about as much as I do Crudup. Now for some reason, many have tried to lay the blame for the movie’s biggest acting flaws on Malin Akerman, but honestly I just don’t see it. I never once found her performance flat or wooden, in fact I find her quite radiant at times.

Unfortunately, of all the characters Laurie Jupiter/Silk Spectre II just really has the least amount of conflict to express on screen. Everything about her identity is about being a superhero. She didn’t decide to be a crime fighter, but instead had to carry on the legacy of her mother. Her choice of lovers and friends are all capes or former heroes. Even her sexual identity is wrapped around how men perceived Silk Specter and not how she really is. Now that she is trying to define herself as a person, by leaving the one being she has known for the last decade, Dr. Manhattan, she seems to have completely lost her way.

I think this is what ends up making her relationship with former hero Dan Dreiberg AKA: Nite Owl II, played by Patrick Wilson. Dan is a man who is completely lost without his costume, but still so likable. Much like Silk Spectre, so much of who he is, and who he wants to be is wrapped up in his costumed identity, and when the government took that away from him, all he had left was an empty home and an empty mask.

To be honest, I think I may even like Dan in this movie more than I do in the book. Wilson just makes him so likeable, and little touches really go a long way to establishing him as a great character. There’s a little bit of awe left in Dan, like when he sees Laurie dressed up in the restaurant, but more so when he sees her in the Silk Spectre costume for the first time. I love that he’s striking a superhero pose and really getting into the moment, and then can’t help but lose his composure when he sees her.

It’s a sweet relationship that builds from loneliness, and is a union that seems genuine as it builds, even if the consummation of their love is kind of a weird sequence. Still, up to that point it seems really sweet, and I like how it builds kind of slowly throughout the picture. I also like how Wilson’s take on Nite Owl is one where you completely buy him as a bad ass. Again, Dan is supposed to be a lovable schlub, but when he breaks out his fighting skills, he’s not messing around and the scene where he and Laurie bust out the kung fu on the street punks is a satisfying emotional moment, as well as a visceral standout amongst the action scenes. Alright, so I guess once again I’m going to have to stop here, without really getting to talk about everything I’d like to about this movie, but I don’t mind discussing this thing for another week if you don’t mind reading it. See you guys next week.