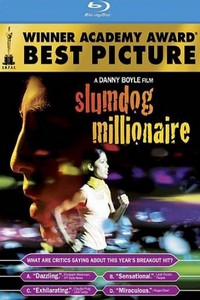 Since its release last November, Slumdog Millionaire has become a phenomenon first spreading by word of mouth, then sparking worldwide interest with all of its critical acclaim. When I first saw this film, it was right after the Oscar nominees were announced. Before Slumdog Millionaire was nominated for ten Oscars, only a handful of people had seen the film, but when I went to the theater (and at a matinee no less), it was packed. Now that the film has won 8 of the 10 Oscars it was nominated for and has been released to DVD and Blu-Ray, it can win over an even larger audience.

Jamal Malick is a contestant on Indias version of the popular game show Who Wants to Be a Millionaire? After winning 10,000,000 rupees, the show has run out of time and must break until the following day. Instead of putting Jamal, a “slum dog”, up in a hotel for the night, he is taken and tortured. How could a boy from the Mumbai slums possibly know the answers and get as far as he did on the show without cheating? The answer is simple. Jamal has lived an exciting, painful, adventurous life, and each question can be answered by something that he has personally experienced.

The Oscar winning screenplay by Simon Beaufoy, based on the book Q & A by Vikas Swarup, weaves several different storylines and spans the entire life of Jamal, jumping back and forth in time. Each layer of the plot is pulled back slowly, keeping the audience completely enthralled, and making the end payoff that much sweeter.

The crazed screenplay would have fallen apart under any other direction but Danny Boyles. He excels at the outrageous and making the unbelievable believable. He has won the Oscar for Best Director for this film and he has earned it completely.

The entirely unknown cast has become full blown movie stars overnight. A year ago the world had never heard of Freida Pinto, Dev Patel, Anil Kapoor, or Rubina Ali and now we cant imagine a world without them. Dev Patel (Jamal) has scored a role in M. Night Shyamalans The Last Airbender based on Nickelodeons Avatar: The Last Airbender. Freida Pinto has scored a deal with LOreal to be the new spokesmodel, and has also been cast in the newest Woody Allen film. Anil Kapoor, who guest starred on Es The Soup to promote the Slumdog Millionaire DVD release, has enjoyed much success with his film career in India and will increase his international success when he plays a role on the 8th season of 24. Rubina Ali has been in the news recently because of personal issues, but she and co-star Azharuddin Mohammed Ismail will be co-starring again in a Bollywood film, Kal Kinse Dekha.

Slumdog Millionaire is a modern day Cinderella story, in real life and on film. The film is a masterpiece in every sense of the word and by a long shot, my favorite film of 2008.

This Blu-Ray release is presented in a brilliant 2.35:1 aspect ratio. Since Boyle used several different types of camera while filming, parts of the film may appear grainy. He explains in the commentary that this is intentional. The film is stunning nonetheless.

The sound is Dolby Digital surround. This is quite possibly the best quality sound on a BD that I’ve experienced. Maybe it’s because of the music, but this is a lovely sounding disc.

Slumdog Dreams: Danny Boyle and The Making of Slumdog Millionaire – This two-part making-of features Danny Boyle talking in length about this project. He discusses the casting process and some of the obstacles he encountered while filming in Mumbai. 22:58

From Script to Scene: Toilet Scene – Danny Boyle and Simon Beaufoy discuss this scene and how Boyle wanted to capture what Beaufoy had written. They love this scene in particular because it sets up the relationship between the two brothers. They don’t give away what they used as the poop though, that is reserved for the director’s commentary. 5:25

Indian Short Film – Manjha – This black and white short features a young brother and sister living alone in the slums, and their encounter with a corrupt police officer. The film drags a bit during the first half, but everything comes together in the second half. Warning – this is a brutal short and might be difficult for some people to watch. 41:03

Every once in awhile a film will come along and sweep the Oscars and won’t have that much of a lasting impact on the audience. This is not one of those films. I’ve seen it several times now and each time, I notice something different. Every time, there’s something new to take away from it. Slumdog Millionaire is a brilliant film all around.