Held out of theatres for a good reason. 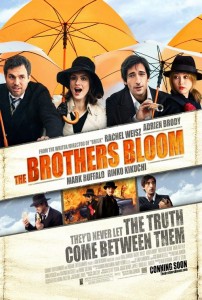 Rian Johnson is one of the hot new directors in Hollywood for a good reason. Brick was extraordinary in its quality and remarkable in how cost effective it was. Given a first-rate cast, as opposed to Joseph Gordon-Leavitt and a group of young actors, one wondered at the time what Johnson could do in a feature film. The Brothers Bloom is that film, with two Oscar winners no less, and it’s a step back from Brick for sure. And while Bloom may be a step down from where Brick wound up, it’s still a good film and that’s not a bad thing.

The film focuses on the titular brothers, Stephen (Mark Ruffalo) and Bloom (Adrien Brody), a pair of confidence artists who have been making their living scamming people out of vast sums of money for years. Stephen is the brains behind the operation and Bloom the straight man, getting people to buy into Stephen’s scheming. After one con too many, Bloom retires to Montenegro as a way of fleeing the life of crime he never truly wanted. Convinced to come out of this retirement for one last massive score from a rich heiress (Rachel Weisz), things change when he finds himself falling for her and interfering with their con.

Johnson as the director shows a lot of the premise that Brick had as his cast has a remarkable chemistry together. He has first rate actors, of course, but the writer/director has everyone on the same page and the film is enhanced because of it. There’s no forced awkwardness as everyone works together wonderfully; the film flies by at a brisk pace because of it. Johnson’s script may be a bit unusual but with a top notch cast it works wonderfully. This is a character-driven film, a departure from the more story-driven Brick, but Johnson handles the different atmosphere wonderfully by letting his cast live in the moment so to speak. They work well and Johnson’s style of longer takes and dialogue suits them perfectly.

The problem is that the film maximizes what it has but never quite reaches a level of brilliance. There’s no chill in the back of your spine, especially during key moments in the film. There’s no attachment to most of the characters due to the fact that they’re criminals and unashamed of it. These are con men who have no problem with stealing from anyone, including setting up schemes to rip off women. It’s hard to feel bad for people in that scenario, no matter how well written, and the romantic notion behind it that Johnson seems to find in it.

The Brothers Bloom is a good studio debut from a director who cut his teeth on the independent circuit, but hopefully is a stepping stone to better films.