Is Anybody There? – Review 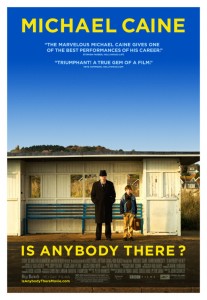 Even in his 70s, Michael Caine is still an actor one has to put up in the team picture of best actors currently working. Reduced to more supporting roles over the years, Caine has gone from being a British leading man to being the British version of Morgan Freeman. He’s fabulous as the old master dispensing wisdom, lending a certain credibility to Christopher Nolan’s Batman franchise as Albert Pennyworth that hadn’t been there before. His career arc has been fascinating, going from being on top of the marquee to being underneath it, all the while becoming a better actor over the years. Is Anybody There? is Caine in the lead, showing that 76 he’s still got some zing left on his acting fastball.

Caine stars as Clarence, a retired magician given the final indignity: moving into a nursing home. There he meets enterprising youngster Edward (Bill Milner), a 10 year old who lives at the nursing home his parents (David Morrissey and Anne-Marie Duff) run. Coming to terms with the early onset of his dementia, Clarence is a nasty old curmudgeon who manages to bond with Edward. Edward is coming to terms with the fact that his life has changed and that the nursing home business they’re running will forever change the way he looks at life and death.

The film itself isn’t all that spectacular; it’s plodding and doesn’t go anywhere for the most part. John Crowley has done solid character exploration pieces before, including the underrated Boy A, but something is missing from this. There’s plenty of exposition, as the film belabors the points of their unhappiness (and everyone in this film is relatively unhappy) but never gives us an exploration about it. It makes for uninteresting viewing. And mainly it’s because the rest of the cast isn’t up to the task of trying to be as good as Michael Caine.

It’s hard for some of the best actors to keep up with one of Britain’s finest, but for a relatively mediocre cast it’s especially hard. Caine commands the screen, taking away the usual niceties he’s known for and bringing out Clarence as a brilliant but bitter man who has lost nearly everything and wants to retain his dignity, at a minimum, when seemingly the world around him wants him to surrender even that. Clarence is a man full of regret and quietly sad about it; the choices he made cost him nearly everything and all he has left are the few magic tracks he can still pull off and fading memories of his heyday as “The Amazing Clarence.” As Clarence lives out his final days in a nursing home, his friendship with Edward becomes something that allows for him to retain some semblance of dignity in the new world he finds himself in.

Is Anybody There? is not a good film, but there’s a reason to seek it out: Perhaps one of the best performances of Michael Caine’s career.