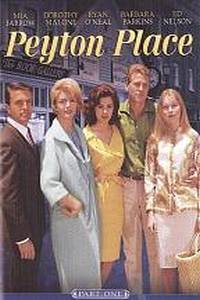 Politicians have this horrible knack for claiming that small towns in America are the most wonderful places in the world. They think they are devoid of any problems found in the city. They claim the people who live in the small towns are perfect when compared to their wicked big city counterparts. This ideal vision is what the politicians swear they can restore to your life if you vote for them. Peyton Place dared to suggest that even in a small New England town, theres a lot of nastiness. Grace Metaliouss novel became a sensation and the buzz word for small town hypocrisy. Nearly a decade later in 1964, the book was adapted to TV in what was completely unconventional for a primetime series. The show ran twice a week. They never took a week off for its five season run. Peyton Place: Part One contains the first 31 of 514 episodes.

The first episode has Dr. Michael Rossi (Ed Nelson) taking the train into the quaint town of Peyton Place. Hes ready to start his practice. However the locals dont understand why a doctor would move there from New York City. Rodney Harrison (Ryan ONeal) picks him up in the train station. Hes related to the dear doctor. Rodneys dad (Paul Langton) owns the local mill. Later that day Rodney discovers his dad getting frisky with his secretary Julie Anderson (Kasey Rogers). Turns out Rodney dates Betty Anderson (Barbara Parkins). How awkward would it be to double date with your dad? Theres also confusion with Rods brother Normans relationship with Allison MacKenzie (Mia Farrow). Turns out Rod also likes her. On top of it all, Allisons mom (Dorothy Malone) doesnt approve of her daughter being with any boy. But shes not really a prude since it turns out she hasnt told her daughter who her real daddy is. At the end of the first episode, the town newspapers editor jokes with Dr. Rossi that small town life is rather predictable. The doctor better stock up on condoms and penicillin.

This is one twisted little town as the soap opera tales unfold. Over the course of the 31 episodes, theres affairs, a plea for an abortion (which wasnt legal at the time), an elopement, threats of divorces, car wrecks, a death, and a man’s dream of starting an insurance company. No need to giveaway the residents that get into all this trouble. Whats the point of spoiling a soap opera? Be assured that Its not a calm simple life in Peyton Place. This town is as messed up as Manhattan. The only difference is nobody has to get their parking validated when they visit Dr. Rossis office.

Whats remarkable is knowing that the original audience for this show had to make time to watch it twice a week and they couldnt skip the summer reruns. There werent any DVRs or VCRs to catch you up if you missed an episode. You really had to follow this marathon story. While the scenes have the pacing of a soap, theyre shot with the same cinematography found on The Untouchables. This isnt like those hideous black and white kinescopes of General Hospital. The acting is a step above the folks that perform in the afternoons. The tandem of a young Mia Farrow and Ryan ONeal is quite fetching. Its easy to see how they were able to become major stars in Rosemarys Baby and Love Story. Peyton Place: Part Two is scheduled to be released July 14 for those folks fearful of waiting too long on a cliffhanger.

The video is 1.33:1 full frame. The transfers vary a bit between episodes. Most of them look really sharp. There are a few that appear to be taken from worn 16mm reels. The quality never gets unwatchable. The audio is mono. The rougher transfers dont sound as tight as the better episodes.

Peyton Place: Part One kicks this long running series off with enough scandal and heartbreak to last 514 episodes. Theres plenty of twisted people living in the beautiful vision falsely sold to us by politicians. Every place has issues, Peyton Place dares to expose these hypocrisies to the light.