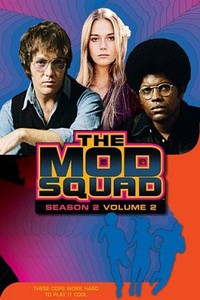 Pete, Linc and Julie might have been undercover cops, but they were never narcs. The trio of hipsters were recruited by Captain Greer (Tige Andrews) into being his special unit that can infiltrate numerous situations without sticking out as plainclothes cops. At the end of their second year, the threesome havent sold out to the man. Linc Hayes (Clarence Williams III) still has his black revolutionary desires. Even with her association with so many crooks, Julie Barnes (Peggy Lipton) remains trusting enough to keep her front door unlocked. Pete Cochran (Michael Cole) finds his soul ache from having to lie to people. Even on the right side of the law, hes still troubled. They might carry police identification cards, but they arent ready to be cops onThe Mod Squad: Season 2, Volume 2.

“Sweet Child of Terror” has Julie being mistaken for a friend when shes hanging out at a rich familys house. Trouble is the man who mistakes her is a kidnapper. They cant tell the kidnapper hes screwed up for fear of what hell do to Julie. “The King of Empty Cups” is a parents worse nightmare. The Chief of Polices daughter has run off to become a groupie for Noel Harrison. He did have a hit singing “The Windmills of Your Mind” on The Thomas Crown Affair soundtrack. The soft rock Noel plays the psychedelic superstar Quinn. The daughter has moved into his hippie mansion and become a speed junky. Julie poses as a fan while Linc and Pete take over Quinns light show. Youll want to have you lava lamp nearby for this episode. “The Exile” has Julie getting attached to a classmate. She doesnt know the guy is the son of Middle Eastern king and hes in danger. “Survival House” brings back Sammy Davis Jr. Instead of being a priest, hes now a recovering addict in a halfway house. He gets accused of raping a minor and takes the blame. The Mod Squad have to figure out why hes not putting up a defense.

“Mother of Sorrow” has Oscar winner Richard Dreyfus (Jaws) being one of Petes old frat brothers. Hes a suspect in the murder of a girl. Its up to Pete to end Dreyfus games with the law to get the truth out. Lee Grant (Shampoo) is Dreyfus overbearing mother that holds the ultimate clue. “The Deadly Sin” has Julie sneaking into a convent to keep an eye on a nun. Turns out the nuns dad is a major mobster. Theyre hoping the nun will confess to Sister Julie about what the father did. Julie really know how to make the post-Vatican II nun habit and veil look sexy. Shes probably responsible for many teens of that era getting a nun fetish.

“A Time for Remembering” has the squad celebrating their second anniversary on the force. Petes had it with the undercover life. He wants to go straight and not work for the law. However the farewell party is ruined when a guy they busted in the pilot movie gets sprung from prison. Hes got a surprise planned for those meddling kids that will make Petes retirement plans a done deal. Theres lots of flashbacks to remind us of how they were on the first season. “Return to Darkness, Return to Light” has Linc reunited with the blind woman from the first seasons “A Hint of Darkness, A Hint of Light.” When she calls him up for a dinner party invitation, Linc thinks she finally wants to hook up. Problem is the party is to celebrate her engagement to Ivan Dixon. Its a jealous lover face off between Linc and Kinch from Hogans Heroes. What is a woman to do with two such suitors? “Call Back Yesterday” had Pete protecting his ex-girlfriends father. The lover is Margot Kidder pre-Superman. Youll get an idea why she hooked up with everyone mentioned in Easy Rides, Raging Bulls. Her current boyfriend is Mark Goddard (Don West on Lost In Space). Should Auld Acquaintance Be Forgotten has a movie about an unsolved murder being sabotaged. Is the script close to the truth? Whats Ed Asners connection to this ugliness? How will he react to the spunky Julie? “The Loser” has the son of Capt. Greers ex-partner being charged with a hit and run. The Mod Squad suspect the kid is a patsy for a politicians crimes. How could David Cassidy be guilty?

The fact that Pete, Linc and Julie never get comfortable as policemen keeps this second season interesting. Theres no discussion of how many days until they can retire. They dont even care that they cant carry a gun. Even though they deal with the worst of humanity, they still believe that a few people connected to evil enterprises still have souls. This isnt completely a job to them. The Mod Squad: Season 2, Volume 2 keeps the trio helping society and not merely working for the man.

The Episodes
“The Debt,” “Sweet Child of Terror,” “The King of Empty Cups,” “A Town Called Sincere,” “The Exile,” “Survival House,” “Mother of Sorrow,” “The Deadly Sin,” “A Time for Remembering,” “Return To Darkness, Return To Light,” “Call Back Yesterday,” “Should Auld Acquaintance Be Forgot!” and “The Loser.”

The video is 1.33:1 full frame. The transfers are taken from the film source so they look sharp. Youll get a really detailed look at the hippie house. The audio is Dolby Digital mono. Expect to groove out and have your mind expanded by the psychedelic sounds of Noel Harrison.

The Mod Squad: Season 2, Volume 2 keeps up the trippy times. Linc, Pete and Julie maintain their dignity on these 13 cases. David Cassidy, Ed Asner and Sammy Davis Jr. are great as almost guilty guest stars. This is too groovy to pass up.
………………………………………