The Big Bang Theory‘s Sheldon is the hottest character on TV. He’s an uber-geek that steals the show. If you haven’t seen the show, you’ll have a chance to catch the sensational sophomore season this fall. Here’s the press release from Warner Home Video:

THE PHYSICS OF FUNNY RETURNS AS
WARNER HOME VIDEO RELEASES
THE BIG BANG THEORY: THE COMPLETE SECOND SEASON ON SEPTEMBER 15, 2009! 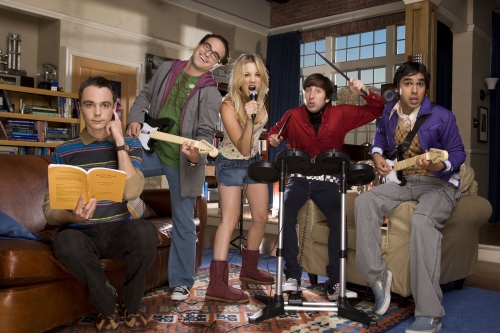 
Burbank, CA (June 2, 2009) Get ready to laugh your way to the lab as two brilliant roommates conquer the scientific world, but fail miserably in the romantic one as Warner Home Video releases the hit comedy The Big Bang Theory: The Complete Second Season on DVD September 15, 2009 for $44.98 SRP. Timed to coincide with the premiere of the shows third season on CBS, fans will enjoy watching and laughing as these astronomically funny scientists and beautiful neighbor prove how high their comedy I.Q.s really are.

The science of funny is back! At work, physicists Leonard and Sheldon and their pals conquer the cosmos. At home, real life from dating to driving conquers them. This season, Leonard gets a girl. So does Sheldon. (Sheldon?!) Howard drives the Mars Rover into a ditch. Raj woos a terminator. Gorgeous girl-next-door Penny falls under the spell of Age of Conan. And super-smart, Ã¼berconfident Leslie Winkler reduces mere men to spineless jellyfish. Twenty-three laugh-filled episodes from series creators Chuck Lorre (Two and a Half Men) and Bill Prady (Gilmore Girls) and a supremely talented cast show why Big Bang is such a big hit.

From Chuck Lorre Productions, Inc. in association with Warner Bros. Television, The Big Bang Theory is executive produced by Chuck Lorre (Two and a Half Men), Bill Prady (Gilmore Girls) and Lee Aronsohn (Two and a Half Men). The series stars Johnny Galecki (Roseanne), Jim Parsons (Garden State), Kaley Cuoco (8 Simple Rules for Dating My Teenage Daughter), Simon Helberg (Studio 60 on the Sunset Strip) and Kunal Nayyar (on stage: Huck & Holden). Already renewed for two additional seasons, and with 22% ratings growth in Season 2, The Big Bang Theory is a hit with critics and fans alike.

“Building on the tremendous DVD success of the shows first season, were very pleased to be releasing The Big Bang Theory: The Complete Second Season,” said Rosemary Markson, WHV Vice President, TV & Special Interest Marketing. “With such an outstanding premise and comically gifted actors, Season Two continues the hilarity and heart of the first season. We expect even stronger DVD sales with Season Two, given the phenomenal growth in the ratings and fan buzz.”

In addition to the entire second season of this smart and charming comedy, The Big Bang Theory: The Complete Second Season contains these brand-new bonus features: