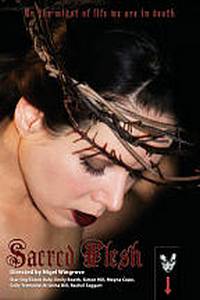 At first I was ready to simply write this off as one of the sickest, most disturbing Redemption movies to date and leave it at that, but after re-reading the press release and watching the special feature on “nunsploitation” I now believe that Sacred Flesh offers an important view into the mind of Wingrove and the impetus behind his creation of Redemption.

The press release accompanying the DVD hails Wingrove as “the vanguard of the fight against British censorship” and claims that in the movie “the Mother Superior learns that repression only leads to perversions of the flesh .” And the Hail Mary! featurette on nunsploitation makes similar statements, actually going into some detail on Wingroves previous encounter with British censorship when his movie Visions of Ecstasy was banned in the UK under English obscenity laws. Two years later Wingrove formed Redemption along with publishing the Satanist magazine “Rule Satannia” and the film newspaper “Nihilista.”

A great deal of the Hail Mary! featurette involves Wingrove talking about British censorship and the Catholic church. As in the press release, he tries to present himself as some kind of hero fighting against the tyrannical rule of the church and repressive British society altogether. Theres only one problem with this: the genre he chose to combat these social evils as he sees them is pornography. This is not a moral argument against pornography. Instead this is an examination of the genre and its weaknesses.

In his book The Six Gun Mystique, John Cawelti examined the Western genre. He looked at the basic structure of the Western story and the various cultural messages it contains. In the process of doing this he had to defend his topic because popular culture was not seen as a valid area of research in academia because it wasnt “art.” As he defends the Western he compares it to another genre which was definitely popular and definitely not considered “art”â€”pornography. He does this because, like Westerns, Horror, and Science Fiction, pornography has a wider range of appeal and follows a mostly formulaic plot structure for a specific outcome. What separates Westerns, Science Fiction, and Horror from pornography is that even though they can follow trite patterns, there is room for experimentation. Pornography, on the other hand, is so focused on the resultâ€”the climaxâ€”that its effectively a dead genre. Once you come then thats it; theres no afterthought, no lingering thread of emotion or dilemma which stays with you well after you finish reading/watching/whatever.

This is why Redemption fails, and why Nigel Wingroves career is an exercise in futility. Make no mistake, the majority of the titles Redemption releases are pornography. The fact that it focuses on a particular subset of fetishes means nothing because, regardless of the formula, it sets out to accomplish the same goal: to make you come. The typical Redemption viewer doesnt care a whit about any social satire which might be going on (or, for that matter, plot, pacing, characterization, etc.); hes there to see tits and see women tortured and humiliated. This is not the type of person who will watch Sacred Flesh and say “My God, all of the repression imposed on us by the Church and State does lead to sexual perversion and violence! I must take to the streets and let the people know!”

Moreover, you cant depict those perversions as stimulating. At the risk of using a dead clichÃ©, thats like trying to have your cake and eat it too. Stating that a repressive society creates perversions and violence and implying that these are negatives while at the same time showing these acts of perversity and violence as something arousing is hypocrisy in the self-aware and stupidity in the ignorant. And I have no idea which category Wingrove falls under.

Clearly the man has some deep-seated issues with British society and the Catholic Church. He is certainly entitled to those feelings, but what is disturbing and infinitely sad is that he seems to be trapped in a destructive dualism. He feels exploited and abused by the Church, so like many others, he goes to the extreme opposite. But in doing this he still allows the Church and the State to define who he is, and quite frankly the path he has chosen is unhealthy in so many ways. Like the creature he so reveresâ€”Satanâ€”Wingrove cannot create, only pervert and distort whats already there. He can never create anything of beauty or profound truth. He can only destroy. And each month I grow more and more tired of having to look at the world through his distorted mirror.

The movie was presented in anamorphic widescreen with no aspect ratio specifications given for that or the audio. The production quality isnt top-notch, but is serviceable as there were no problems with either the video or audio.

Behind the Scenes Stills Gallery

Teaser Trailer for Sisters of Armageddon (1:43)

Once scientists invent a memory erasing machine like in Total Recall these movies will be first on my list of things to forget. These DVDs are a profound waste of my time and introduce an ugliness in my life which I do not want. Not recommended. Ever.