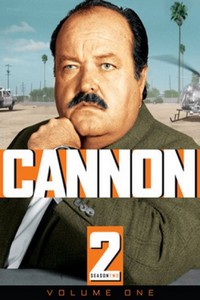 Frank Cannon was a stud. During the 70s, TV was overloaded with private investigators that came in all sort of sizes, income levels and shady pasts. Cannon (William Conrad) was the only one looked like he lived well and didnt burn off too many calories chasing down a lead. He wasnt lazy. He was an ex-cop who understood the short cuts around Los Angeles. Its easy to poke fun of Cannon in the trailers. Hes balding with a gut the size of VW Bug. But he means serious business when the actual episode starts. By act three, you realize hes not going to let the client down when hes hired for the job. Cannon: Season Two, Volume One brings another dozen cases that prove the P.I. on Sunset Blvd. wasnt a showbiz phony.

â€¨”Bad Cats and Sudden Death” lets an assistant DA get accused of murdering his wife. Cannon uncovers car theft ring involved in the frame up. Larry Linville gets in a little suit time before being shipped off to Korea to be Frank Burns in M*A*S*H*. “Sky Above, Death Below” sends Cannon hunting down a draft dodger that witnessed a murder. Richard Hatch (Battlestar Galactica) is extremely young. “Bitter Legion” allows Lloyd Bochner to assemble a group of Vietnam vets to rob the box office at the L.A. Coliseum. Cannon has to infiltrate this operation to find his clients husband. The sad part of the episode is seeing Micky Dolenz as one of Lloyds flunkies. Hes still got his Monkees haircut. When he finally gets a line, he severely overplays it. This is the bad example to be shown in acting classes. Its like when hed perform the mobster impersonation on The Monkees. Its easy to see why he would get steady work doing voices for animated cartoons.

“That Was No Lady” opens with an explosion when a lawyers car blows up. Cannon is brought in to protect Jessica Walter (Arrested Development) and her clients. The guys had stolen from a charity so theyre somehow marked for death. “The Predators” brings up illegal immigrants and coyote traps. Its up to Cannon to clear another clients name. Robert Pine (CHiPs) plays the deputy sheriff. Pine is now the father of the new Capt. Kirk. “The Rip Off” starts with Cannon returning to his apartment only to discover someone has cleaned him out. All of his lovely items are gone. He hires himself to recover his lost furniture. Turns out the culprit is mobster George Maharis (Route 66). Hes fearful that Cannon is working for his wife (Stefanie Powers) in a divorce. Theres also a charming bit of computer technology involving a cassette tape as the key.

“The Shadow Man” drops the mystery of why a real estate developer would fall off a cliff while carrying a fortune in bonds. Cannon has to find the body and the bonds before he can eat dinner. “Hear No Evil” lets William Daniels (St. Elsewhere) play Dale Corey, an electronics store owner. In his free time he does surveillance work. Turns out his gig at a hotel has been turned into a source of blackmail. Everyone thinks hes behind the scheme. “The Endangered Species” gets a dad accused of murdering his son on a camping trip. Cannon must prove it was just an accident.

Of all the 70s sleuths, Cannon always came off as the kind of guy youd end up hiring in a pinch. Dont mistake his bulky physique as a sign of laziness. Hes willing to scrap and take a bullet. Conrad is much more action oriented than his time as the Fatman on Jake and the Fatman. Cannon: Season Two, Volume One is a further testament to his greatness.

The video is 1.33:1 full frame. The transfers appear to have been taken from a video master. The details arent nearly as sharp as shows that have been remastered from high definition transfers scanned off the 35mm negatives. The audio is Dolby Digital mono. Conrads amazing voice reverberates in the most tense situations.

Episodic Promos (0:30) gives a quick tease of whats coming up before each episode.

Cannon: Season Two, Volume One is another fine batch of detective yarns from the 70s. Conrad is a natural in the role of the ex-cop with all the connection. He speaks with a sense of authority. When he locks the blue eyes on a culprit, theres no escaping him. The only sad part of this set is seeing how bad Micky Dolenz was outside of being in his band. Put on a wide tie and enjoy the action.