The following is a test of the new internal media uploading technology from ComicsNexus.com and…

Remember: this is only a test.

Actually, to all my comic book heads out there, once you’re finished giggling…actually, if I could have a second? [BEGIN DIGRESSION] Hey, I regret paying $10 to see SPIDER-MAN 3 as much as the next guy, and I felt especially bad for Topher Grace that he didn’t get to be in one of the good ones and y’know, I wonder sometimes if SPIDER-MAN 3 didn’t in fact kill his acting career, but c’mon. How can you look at that and not laugh? Okay, [END DIGRESSION]

Now, like I was saying – comic book heads, I’d like you to study this closely. This could make for either (A) a very interesting form of protest, if enough of us were to gather in front of the Marvel office building in midtown New York – more and more will perform this obnoxious dance at your front door until you BRING QUESADA TO US! – or (B) a very interesting form of celebration for the day when Marvel comes to their senses and undoes NO GOOD REASON. I’m not sure which scenario would be the more fitting one, but if you picture the above dance being performed by scores of men and women of all ages to the point where it actually makes the evening news…it just might make you smile a little inside. …which in turn has me drawing open the curtains to KNEE-JERK REACTION THEATRE once more, because that got me thinking about another teaser of another #600th issue: 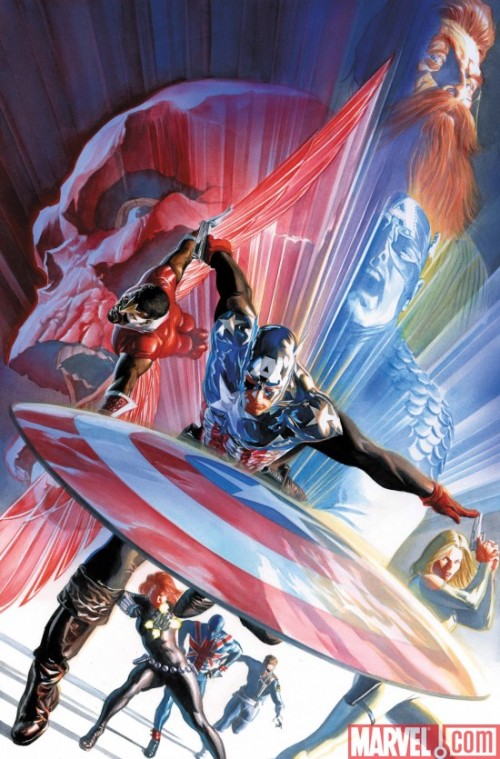 And to both, I give you MY KNEE-JERK REACTION: Just knock it off, Marvel.

I’m not even going to get into the Spider-Man teaser, because the comic has been stripped of all sense of relevance ever since Peter and Mary Jane were forced to strike the deal-that-shall-not-be-named, and to even tease the possibility that Marvel just might bring them back together now completely out of the blue is about as absurd and meaningless as the wedding scenario that will take place in that story.

But what really takes the cake is all the wasted time in trying to misdirect us on what’s going to happen in CAPTAIN AMERICA #600. Obviously Marvel wants us to know about this one – even going so far as to make sure it’s released with a two day headstart on anything else that week – but then you’ve got Kyle Baker releasing this bit of artwork, which I imagine was designed to make you question things a little bit more. Never mind if anybody really believes that CAPTAIN AMERICA would return to its original numbering to herald the return of a retcon character…but imagine if that was really the plan for a second. I’ll wait.

Remember when this was put out there? 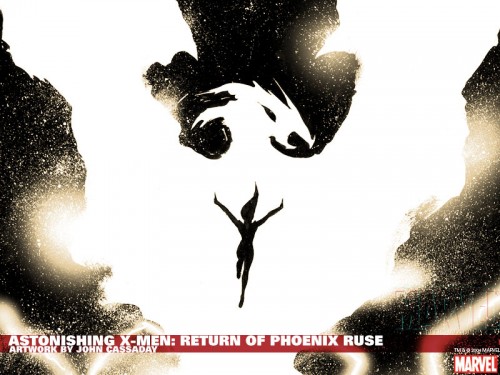 This was teaser art for ASTONISHING X-MEN #4, which promised the resurrection of an X-Man, but when everybody expected one X-Man – especially after this image was released – we got a different one instead: 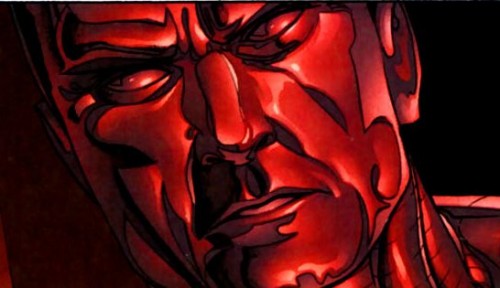 And even though I don’t like resurrections, nor did I even miss Colossus, I will admit that this moment ruled.

Do you remember why this was so effective? As it is in all things, the execution was key – for one thing, it wasn’t done in the first issue, or the 12th, or the 25th or any other “milestone number” issue. For another, it wasn’t hyped in such a way that backs Marvel into a corner. In #400, Aunt May died after revealing to Peter that she knew he was Spider-Man. (Careful when you click here, comic book heads. I got a little teary-eyed re-reading those pages.)

In #500, Peter literally relived some of his biggest moments ever, and then got to talk to Uncle Ben one last time.

That wasn’t his imagination, either; remember, Doctor Strange made it happen. THAT WAS UNCLE BEN.

If the biggest thing that happens in THE AMAZING SPIDER-MAN* #600 is that Aunt May gets remarried, then that’s a little underwhelming for a milestone-numbered issue. If the biggest thing that happens is Peter and Mary Jane get remarried, then Marvel will have essentially conceded that ONE MORE DAY/BRAND NEW DAY was a waste of time, money and paper and that will likely piss off those readers who gave this status quo a chance.

And as unlikely as it sounds that such a thing could come from Ed Brubaker, if anything happens in CAPTAIN AMERICA #600 that does not somehow involve the return of Steve Rogers, with the early release, the teaser image and the anticipated media coverage…then Marvel will have blown it. Simple as that.

Okay, moving on! CBR.com has a preview of FANTASTIC FOUR #567 – hmm….Fantastic 4…5-6-7. Neat! – which will be out this Shipment Day and you know, I couldn’t help but look at this particular image in a meta sort of way… 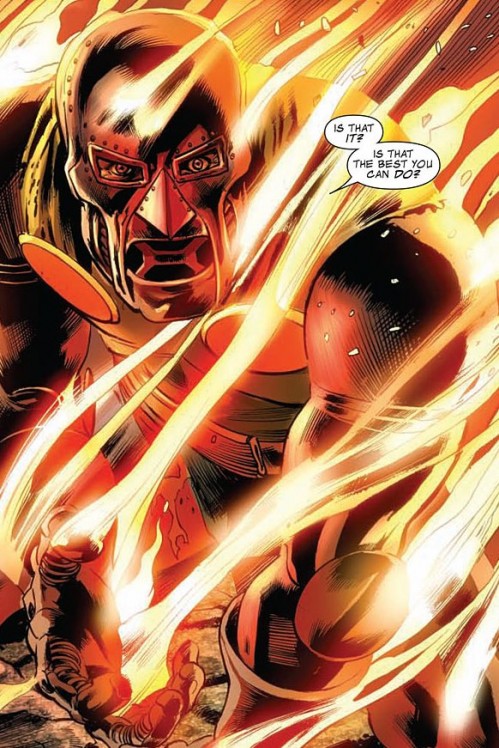 …because I can tell ya Victor, I’ve been asking Mark Millar that question for a little over a year now…and well, I think this is all there is. Sorry. I realize you might need a moment, but for what it’s worth, I hear the next guy’s supposed to be pretty good…

Meanwhile over in DC, BATMAN & ROBIN #1 arrived last week – as the new Caped Crusader put it, together again for the first time… 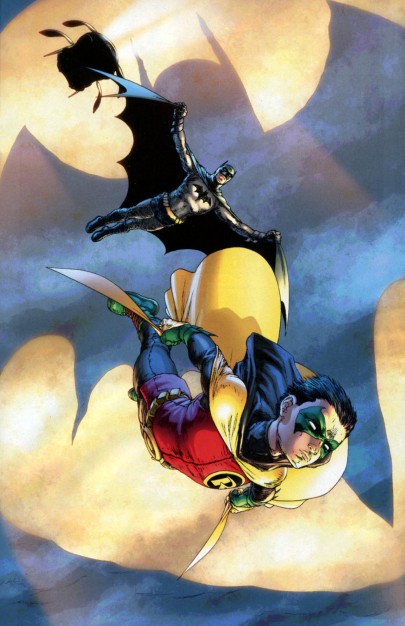 …I’ll tell ya, it was a LOT of fun to read, and I expected it would be… 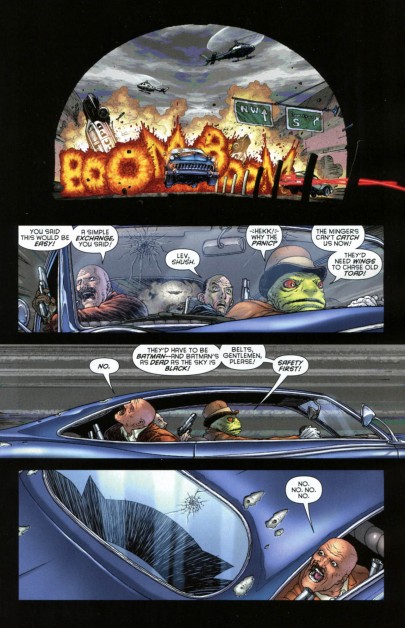 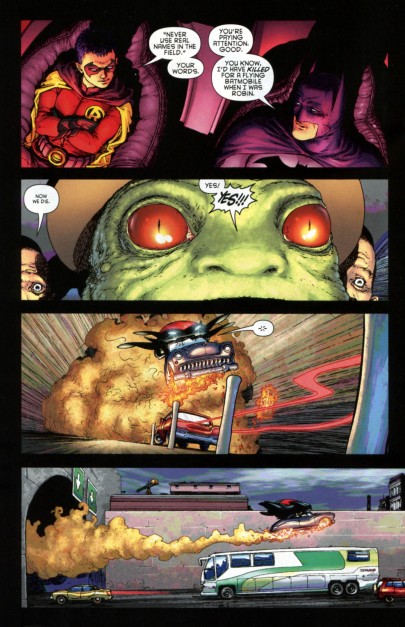 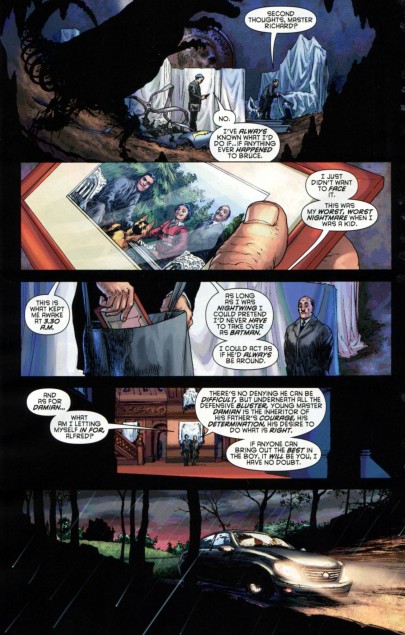 …it is in fact so ugly, I think it may require an Eisner Award category all its own – I mean, look at this thing!

…But I do digress. Anyway, with everyone all twitter-pated over Grant Morrison’s reimagining of the Dynamic Duo, what’s flying under the radar in comic book news right now is something that I’m going to be interested in – his next DC project, entitled MULTIVERSITY.

According to the interview, MULTIVERSITY will be out next summer and returns to the notion of the 52 alternate planet Earths that were the end result of the various crises of the last two or three years. Now, this could be good, and in fact should be great. Especially considering Captain Carrot’s gonna make an appearance! The thing is, the deciding variable on that likely won’t be Morrison himself; in fact, I think it’s going to be his assigned editor.

I’ve noticed something about Morrison’s work over the years, both in what I’ve gotten to preview and what I’ve read myself. There’s no denying the man is four kinds of brilliant, and the sheer imagination behind his ideas is the stuff that, quite frankly, all comic book writers should aspire to. But when it comes to the coherence of any given story that he’s written, I think his stories work or fail depending on if he is being edited properly. When people hold up his run on ANIMAL MAN as one of the best of the best in modern day superhero comics, what’s often overlooked is that his run on ANIMAL MAN was published during a period when there were no such thing as “superstar” writers and artists. What I mean by that, is I don’t think a writer or an artist had enough popularity to sell a comic just on the power of their name…yet.

What that means, is that if Grant handed in a script, it was most likely sent back to him with notes on what to change, what needed to be fleshed out, what didn’t make sense…and that in turn made Grant’s finished product even better. Because that’s what the editor is there to do – gently guide the writer and the artist towards the end goal of making the story as good as it can be. Think about it; we all have Morrison stories that we like, and Morrison stories that we don’t like, so really – what other factor could there be? When Grant Morrison is being reined in where he needs to be reined in, it’s like butter in four colors. When he’s not – say perhaps, he’s been paired with an editor who might be a little too starstruck to do his or her (most likely his) job, well…let me ask you this: y’ever tried discussing THE X-FILES with a stroke victim?

Neither have I, but I’ll bet you a Happy Meal that’s what it’s like.

I was actually hoping to be able to insert a video clip, but I guess we haven’t gotten there yet. In the meantime, make sure your sound’s on, and peep the awesome! MEGA MAN 2 – With Lyrics!

And last but not least, I’d like to mention that on Saturday, June 20th I will be performing once again at the Eastville Comedy Club at 85 East 4th Street, a few blocks shy of St. Mark’s Place. It’s a 7pm start time, and you can call (212) 260-2445 to make a reservation – just let’em know you’ll be coming to see me. I had a great show my first time there and I can guarantee you a fun night of comedy in an area of the city where there is always something to get into.

Til next time everybody – I’m Greg Manuel, and I’m just sayin’ is all…