Disney Animation Collection 5: The Wind in the Willows – DVD Review 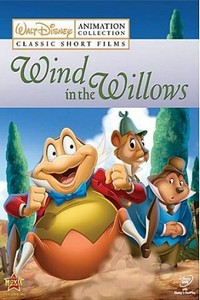 The Walt Disney Company has long released animated films that have captured our hearts, made us cry, and made us all smile in delight. Feature length films that introduce us to such wonderful characters as Pinocchio, Aladdin, Mulan, and the Seven Dwarfs have made each of us able to identify them by sight and sometimes even by the sounds of their voices. But sometimes the greatest characters and stories aren’t resented to us in theatres or in the more well-known Disney classics but in the shorter and more obscure films that kind of take a backseat most of the time.

The Wind in the Willows is a fantastic tale of friendship, working together, and the evilness of greed. Mr. Toad lives along the river with his friends Ratty, Mole, and Angus McBadger in complete and total happiness. That happiness though is sometimes disturbed due to the different manias that Mr. Toad occasionally falls victim to making it is hard for his friends to control him. Eventually it comes time for the automobile (motorcar) to find its way into Mr. Toad’s mind and make it absolutely irresistible to him. So irresistible that he makes a trade with the diabolical Mr. Winky and his band of mischievous weasels. The trade consisted of the weasels giving Mr. Toad the motorcar and Mr. Toad giving them Toad Hall. Upon hearing this news, reality sets in and the friends must work together to get back what they feel is rightfully theirs.

I’ll never stop loving The Wind in the Willows for as long as my life continues because it is just one of the greatest short animated films ever. The characters are overly fun and lovable while keeping a serious air about them that makes this story rather intense as well as amusing. In a way one could almost argue that this film is aimed more at adults then children because of the subject matter at hand, but the animation and some fun-loving situations and songs keep it good for the whole family.

There’s something with this set that almost kind of confuses me a bit and it is the way the DVD is titled and also how it is laid out on the disc’s menus. Overall it is called the Disney Animation Collection: Classic Short Films which would be the reasoning behind having five other animated shorts included, but it still just lists The Wind in the Willows also in the main title. Is that supposed to be taken as this DVD having a collection of animated films or that The Wind is just part of a collection of animated DVDs? Either way, there is nothing actually listed in the disc’s “special features” section so I’m going to say that the other five short films are what can be looked at as being there. I am one of those people that sees this release as being The Wind in the Willows DVD and it being part of an overall larger animation collection. You however can take it as you wish.

The film is shown in 1.33:1 Full Screen format and it looks pretty good for its age, but it is certainly far from being perfect. A little bit of grain and specks here and there are sprinkled throughout but nothing that should bother you much.

The film is heard in Dolby Digital 5.1 Surround Sound and it was uncalled for to put that much effort into it. All dialogue and music can be heard perfectly, but it’s not a film that really calls for having surround sound so it was sort of unnecessary.

The Golden Touch – The classic tale of King Midas and his greedy desire for all things gold. Once he is granted the ability to make gold everything he touches; he soon learns the errors of his ways and realizes that greed can lead to sadness.

The Wise Little Hen – A hen wants someone to plant and harvest her corn, but she can’t quite seem to find help from a duck and a pig that claim to have tummy aches. This would happen to be the debut of the one, the only Donald Duck.

The Robber Kitten – A little kitten does not want to take his bath so he does the only thing he could think of and runs away. Along his journey he meets up with a criminal that shows the kitten that perhaps the road is not exactly where he wants to be.

The Grasshopper and the Ants – All of the ants are busy during the summer months working hard so that they can stockpile food away for the cold and harsh winter. The Grasshopper on the other hand just wants to play his fiddle, sing, and dance without giving much thought to later on. He soon realizes the error of his ways though when the cold of winter comes and he is left hungry and freezing.

The Ugly Duckling – Once all of her eggs hatch; a mama duck is upset to see one of her ducklings looks nothing like the rest of her children and she lets it be well know that she isn’t pleased. Feeling dejected and shunned, the “ugly” duckling heads out to find a place where he belongs.

Mr. Toad and his wild ride (shout out to the long gone Disney World ride) has always been one of my favorite cartoons and always will be because it is just a lot of fun and now makes me think of my childhood. Everything about it just reminds me of days gone by and is overly enjoyable, but I feel as if it is something that even whole families who have never seen it can get a lot out of it. The other short films included on this DVD are also great additions for any animation fan to have in their collections and it also makes me nostalgic for days of the past thanks to the fact that they are all cartoons I watched as a child. Disney really knows how to put out what people want to see and this is one that will go down as one of my favorites even though I have one slight problem with it. For as long as I can remember, The Wind In The Willows has always been presented alongside Disney’s telling of Sleepy Hollow yet it is conspicuously absent here. Maybe it is being saved for another collection, but this really would have been the perfect place to put it. Oh well, you still can’t beat a toad with moto-mania.