“A-well-a don’t you know about the bird?
Well, everybody knows that the bird is the word!”

Family Guy is one of those shows where you have either stuck with it after its return from cancellation hell, or you tried it out and realize that it isnt as good the second time around. With its countless pop culture references, the show has managed to crank out over 100 episodes. Now Fox has unleashed the seventh volume of Family Guy goodness.

If you want a copy, heres what you need to do.

Okay, here are three questions from Family Guy, and information on what you can win. Special thanks to PR firms and studios that make giveaways like this happen. Big props to them!

Question 1 In the episode “Road to Germany” Stewie picks up a Nazi uniform and it is has this button attached?

Question 2 During the seventh season, Cleveland casually mentions hes getting his own spin-off. In what episode did this occur?

Question 3 In the episode “McStroke” Peter and Brian discover a slaughterhouse filled with cows, one which has the ability to talk. Who does the voice of the cow? 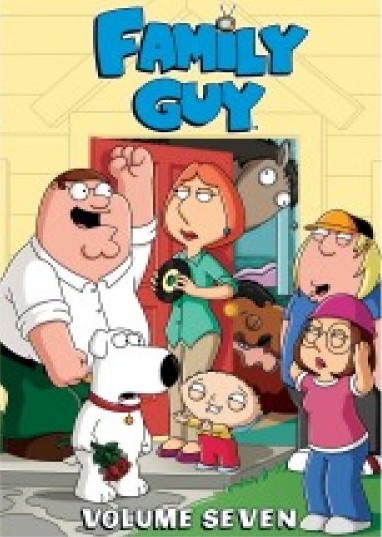 Sick, twisted, politically incorrect and freakin’ sweet, “Family Guy” Volume Seven arrives on DVD June 16 from Twentieth Century Fox Home Entertainment. With all-new uncensored hilarity and hi-jinx, the national phenomenon continues as the Griffin clan embarks on even more outrageous adventures. Highlights include zany antics such as Peters obsession with a 1963 hit song “Surfin’ Bird,” Stewie kidnapping the entire cast of “Star Trek: The Next Generation” and Brian getting injured during a take of Peter’s version of “Jackass.”

Disc 2:
o Episodes:
âž¢ I Dream of Jesus
âž¢ Road to Germany
âž¢ Baby Not On Board
âž¢ The Man with Two Brians
âž¢ Tales of a Third Grade Nothing
âž¢ Oceans Three and a Half