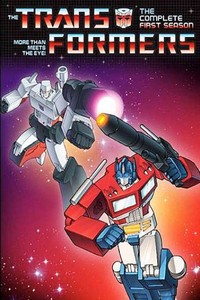 If you grew up in the ’80s then you know all about the Transformers. You played with the toys and you watched the cartoon. But now you’re an adult and you’re curious if you should revisit a cherished childhood memory. Will it still be entertaining, or will just be really bad like most other ’80s cartoons?

There is no denying the sheer cheesiness of this cartoon. It is very dated and, like many of its ’80s brethren, each episode is very much a 25 minute commercial for the toys. But the show still has lots of charm and lots of action, however stilted and if you have any nostalgia for the show odds are you’ll enjoy it.

In case you’re not hip to the Transformers, here’s the story. On a planet called Cybertron there are two feuding groups, the heroic Autobots led by Optimus Prime and the nefarious and aptly named Decepticons led by Megatron. Their planet was running out of fuel so they set out to find more, fell through a wormhole and crashed on earth. Then they woke up four million years later.

Each episode has a pretty simple premise. The Decepticons find a new fuel source on Earth, however taking it will endanger the lives of humans, so it’s up to the Autobots to stop them.

Throughout season one you get to know all you favorite Transformers: Optimus, Megatron, Starscream, Soundwave, Bumblebee and all the rest. Plus you are introduced to several new Transformers (toys!) that went on to be classics as well such as Skyfire (or Jetfire depending on who you talk to) the Dinobots, The Insecticons and the Constructicons who formed together to make Devastator. If that last paragraph made absolutely no sense to you then you were probably never a fan of the show.

The animations if very simple and choppy at times, the dialogue very often laughably bad with lines like “Decepti-bums” and “laser breath” it’s enough to make even the staunchest fan roll their eyes. You even get to see the Autobots surf into battle. Seriously.

However, the show is saved by some pretty strong voice acting. Megatron is Frank Welker, the voice of Fred from Scooby-Doo. Starscream is Chris Latta who also voiced Cobra Commander on G.I. Joe. Scatman Crothers voiced Jazz and who could forget Casey (Shaggy) Kasem as Bluestreak amongst many others. These great voice actors took all that really bad dialog and made it sound epic, which is no small feat.

It is also worth noting that this DVD contains the episodes completely uncut for the very first time since the original broadcast. All releases prior to this were missing little bits that were located and put back in. But before you run out and buy this set keep in mind that a complete series set is on its way so if you are that staunch fan then you might want to hold out until then.

With the resources depleted on Cybertron the Autobots and Decepticons set out in a race to find new energy. However they get sucked through a wormhole and crash on Earth where hey remain deactivated for four million years. Then finally awaken on present day earth and the battle continues.

Disguising themselves as earth’s vehicles the battle between Autobots and Decepticons continues. The Decepticons devise a way to steal Earth’s energy and build a ship to take it back to Cybertron and it is up to the Autobots to stop them.

The Decepticons complete their ship but Starscream rebels against Megatron creativing a rift among their ranks. This allows the Autobots to take the upper hand and save the day.

The Decepticons build a space bridge, a transport from Earth to Cybertron, however it is very dangerous, so they kidnap Bumblebee and Spike to force them to try it out.

Megatron learns of an antimatter formula that could mean limitless power for the Decepticons. Once again it is up to the Autobots to stop them.

When Optimus Prime is horribly wounded, Wheeljack and Spike must use the Decepticons space bridge to sneak back to Cybertron to get the parts they need to fix him before it’s too late.

The Decepticons latest scheme is to siphon the Earth’s heat from the Arctic Circle while there they uncover Skyfire, a long lost friend of Starscreams. They resuscitate him and send him to fight the Autobots, but he likes the cut of their jib better and switches sides. In the end Skyfire sacrifices himself to save the Autobots.

Ratchet and Wheeljack make new Autobots based on Earth fossils: The Dinobots! But they go crazy and attack the Autobots and must be shut down. Later the Autobots are bested in a fight with the Decepticons and only the Dinobots can save them.

Megatron discovers an ancient Crystal of Power, a weapon capable of mass destruction. To battle the Decepticons the Autobots rescue Skyfire and they race off to save Earth once again.

Megatron tricks the Dinobots to switching sides and fighting the Autobots, just as two new Dinobots are built. Dinobot fights Dinobot and Optimus fights to win back the loyalty of the deserters.

Megatron figures out a way to enslave the human mind, with the help of a human scientist. He also manages to pull Cybertron through the space bridge. However its close proximity begins to destroy Earth and the Autobots must find away to stop earths destruction before it’s too late.

The Autobots continue to work to save earth from destruction while Megatron continues his evil schemes.

The gripping conclusion to this three-part epic.

As sort of post script ot the Ultimate Doom Trilogy, Autobots begins to rebuild Earth as the Decepticons scramble to reorganize. Starscream devises a plan that could destroy everyone and Optimus and Megatron must work together to stop him.

A long lost group of Decepticons, now known as Insecticons, ravage a small town. Megatron goes their to get them to join him while the Autobots go to stop them.

Megatron challenges Opimus to a duel to end all duels with the loser to leave earth forever. What Optimus doesn’t know is that with the help of his new Constructicons, Megatron has made himself more powerful than ever before. There is a great battle between Devastator and the Dinobots in this episode as well.

The show is presented in widescreen 1:33.1. Sound is in Dolby 2.0 surround. For a 25-year-old cartoon that didn’t have the biggest budget to begin with, the image still looks pretty good. There are some dirt and scratches but they do nothing but add a little more charm to the show.

Triple Changer: From Toy to Comic to Screen: (20 min.) The creators of the toys and the show and the comics talk about the history of Transformers and how they came to be. This is pretty interesting but these guys are a little full of themselves. You’d think they’d cured cancer or something.

Original Commercials: (2 min.) You get three of these: Optimus Prime and Megatron, Insecticons and Dinobots, and G2 Optimus Prime. These are cheesy and glorious. The only problem here is that there isn’t more of them.

Public Service Announcement: (1 min.) Bumblebee talks a kid out of running away from home. This is amazing and ends with the G.I. Joe slogan “Knowing is half the battle!” Again, why is there only one of these?

Magnet: You get an oh so sweet Autobot’s magnet!

This is a pretty dated show, but I still really enjoyed it, probably more as a comedy, but still I had a good time. If you are a huge fan you might want to wait for that megaset coming in a couple months, but otherwise this is a good starting point for someone just getting into the show. It was a little light on the special features. They had a whole disc to fill up and you only get like 25 minutes of stuff.