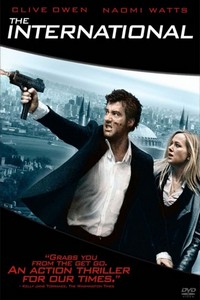 Think like a man of action. Act like a man of thought. If I knew how to live like that I would, but I’ve got no idea what it even means. It sounds good, but no idea what it means. In real life at least, I get it in terms of the movie. On a quick aside, I’ve got that quote credited to Henri Louis Bergson, not the main villain in The International.

The International was released to quite a lot of fanfare in theatres, so chances are you’ve heard a little bit about the movie. But here’s a quick refresher anyway. Clive Owen and Naomi Watts are working a case against the IBBC which they believe is the bank of choice of terrorist groups and many other bad things. Of course that kills all realism in the movie since we all know banks would never do anything remotely dangerous in hopes of raising profit…remind me why I’m not a banker again? Oh yeah, math, that’s it.

The duo follows leads around Europe slowly getting closer to information that could finally shut the super bank down only to have the informants meet untimely demises. But they use this to their advantage and start tracking down the assassin who the bank likes to use for the murders. Why they continue to use the same guy is a little questionable, I’d think they’d want to keep moving the jobs around. They eventually track the assassin to New York where they eventually have a shoot out that would make Shoot ‘Em Up proud.

Speaking of that movie, Clive plays a completely different role here. He’s much more intellectual than shooter in this movie, but he likes showing off his acting chops every now and then. Naomi is pretty much in her standard role here, smart, strong, female in a male world type role. It probably wouldn’t be much of a stretch to see her character from The Ring moving on and becoming the character she plays here. Since both are pretty comfortable in the roles they do a good enough job in the roles. Neither of them reach the “Wow, he/she acted the crap outta that role” level but it’s good enough. The best acting comes from the supporting roles. The guys who run the bank are player very well. They don’t come off as pompous asshats, just normal people doing what they think is best. It’s hard to play a villain that’s not a super villain, but the guys pull it off nicely.

Now, if I were one of the creators of this movie, I’d be saying what a wonderful job acting the architecture did. They purposely picked buildings so they’d have a role in the movie. Here’s the thing…people don’t care. You’ll get a few people who say “ooo, what a pretty building” and a few indie film kids who realize the small guy walking into a big building is supposed to show how hopeless his cause is. But your average viewer isn’t going to pick up on that consciously, subconsciously maybe but not outright, so why bother trying to make such a huge point of it?

I do have to give the makers some credit. It takes guts to shoot in the Grand Bazaar without setting something up first. To just walk in and start shooting without clearing out all the people is not something big time movies usually do. It is the only way to get the feel they were looking for but still a crazy idea. It also quadruples the number of people who randomly look at the camera and wonder what it’s doing there. But the fact that it moves around avoiding other people instead of people being told to avoid the camera adds to realism and the feeling that you’re in the movie.

The International is presented in 2.40:1 Anamorphic Widescreen format and 5.1 Dolby Digital Surround Sound.

It all looks fine, it all sounds fine. There are some really nice shots that make people like me go “ooo, pretty” so I guess it’s a win for them.

Commentary with the Director and Writer.

An Extended scene. They say one scene, they mean one gigantic clip.

The Making of The International 30 min Standard fare, but a pretty in depth look into some of the tricks of the movie.

Shooting at the Guggenheim 7 min This is what a “How we built it” extra is supposed to be. I don’t care that the floor was wood but was painted to look like marble, but tell me anyway.

The Architecture of The International Ugh…

Autostad – Yay, more about the architecture of the movie.